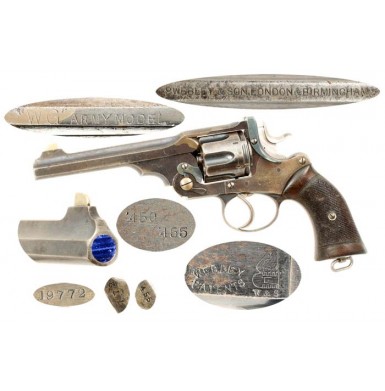 The Webley “WG” Model 1896 was an important revolver as it bridged the gap between the older black powder .476” Enfield military cartridge, the newer black powder .455 Webley Mk I of 1891 and the newly adopted .455 Webley Mk II of 1897 using cordite instead of black powder. Although the designations do not really indicate this, all utilized a .454” bullet with a .476” neck diameter and had a nominal base of .480” with a .535” rim. Even the truly obsolete .450 Adams (or .450 Tranter) was for all practical purposes interchangeable with the newer cartridges. The Mk I had the longest overall length at 21.7mm, the old .476 had a 21.65mm overall length and the new Mk II had a 19.3mm overall length. The Mk II round would be the primary British military handgun cartridge from 1897 to 1898 and from 1900 to 1912. The Mk III was only in use temporarily, as the hollow point bullet design was a violation of the 1899 Hague Convention. The Mk II utilized a 265 grain solid lead round nosed bullet, propelled by 6.5 grains of cordite and traveling at about 650 fps and generating about 250 ft/lbs. of energy, making it comparable to a modern .45 ACP target load. While the stopping power of the older .476 and Mk I cartridges and the new Mk II cartridge were essentially equivalent, it was the differences in pressure curves between the old black powder cartridges and the new cordite ones that were reflected in the strength of the 1896 “WG” Target and Army Model revolvers

Offered here is a FINE condition example of a Webley 1896 “WG” Army Model Revolver. The top of the barrel rib is clearly marked: