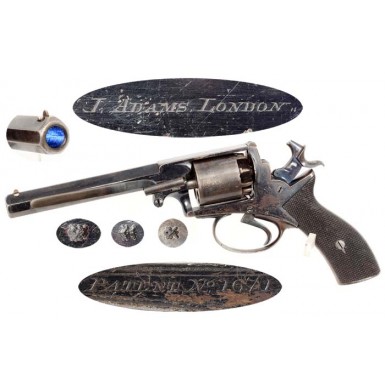 This double action Webley Wedge Frame is a classic “export” revolver, and is unmarked externally except for previously mentioned J. ADAMS LONDON topstrap mark, the Birmingham proofs on the barrel and cylinder, and PATENT No 1671 on the left side of the frame. Internally a pair of file slash assembly marks, / / are found on the rear face of the cylinder, on the edge of the cylinder arbor, on the left edge of the top strap, on the rear edge of the barrel wedge, on the top edge of the loading lever and the loading lever plunger, and on the inner edge of the left gripstrap, concealed by the grips. The grips also bear this assembly mark on their interior surfaces. The gun is in EXTERMELY FINE to NEAR EXCELLENT and retains about 85%+ of its original blued finish on the barrel and top strap. The frame retains about 50%+ of its original finish and has a mottled plum brown patina mixed with remaining finish, much of which is in the protected areas of the frame. The remaining finish and plum brown patina are also flecked with some areas of minor oxidation. The difference in the way the finish wears on these guns is very consistent. Even high condition examples usually retain almost no frame finish, while the barrels and top straps retain lovely blue. I believe this may indicate that the iron/steel alloy used in the frames and barrels were different, resulting in the finish adhering, wearing and surviving very differently with different colorations to the patina. The grip frame retains very little original finish and has a mostly plum-brown patina, with some mottled age discoloration and minor surface oxidation. The cylinder retains about 35%+ of its original blued finish, which has blended with a lovely plum-brown patina that matches the balance of the gun very well. The cylinder also shows some very minor scattered pinpricking and lightly oxidized surface freckling, mostly around the chamber mouths and in the percussion cone recesses. The hammer of this gun retains about 80% of its original bright niter blued finish. Other examples are known where the hammer was left in the white and brightly polished, and some are known with case hardened hammers. As would be expected with a lower cost, “working man’s” revolver, this one shows none of the lightly engraved embellishments typical of Adams and Tranter revolvers, with the only aesthetic addition being a pair of lightly engraved boarder lines that trace the outline of the revolver frame, cylinder face and muzzle. The loading lever is a side-mounted lever similar to the Kerr’s and Tranter’s patent levers that are commonly encountered on English percussion revolvers of the era. The lever appears to have had a very skillful period repair, where the extension arm was reattached to the rear portion of the lever where the plunger is located. This is very well done and barely noticeable, but is clearly shown in the photos below. The matching patina and wear suggest the repair was certainly during the period of use and not more recently. The finish on the lever is mostly worn, having flaked and dulled, blending with a smoky gray and tobacco brown color, with some muted highlights of original niter blue still visible. The metal of the revolver is mostly smooth with only some light scattered patches of minor pinpricking and some areas of very light surface freckling. The revolver is fully functional and is mechanically excellent. The pistol functions perfectly in both single action and double action modes. It times and indexes exactly as it should and has very tight lock up. The side mounted loading lever functions smoothly and locks into place securely. The bore of the revolver rates about VERY FINE. It is extremely bright and retains very crisp rifling that consists of three lands and grooves of approximately equal width, along its entire length. There is some very light frosting in the grooves, but overall the bore is virtually mint, showing that while the revolver was used, it was very well cared for. The revolver retains all five of its original percussion cones (nipples), which show some erosion from firing and use, but remain very crisp and useable today. The original dovetail mounted front sight is in place on the top of the barrel, near the muzzle as well. The two-piece checkered wood grips are in about NEAR FINE condition. They show some use and wear, with some minor flattening and smoothing of the checkering from carry and handling. The grips are in solid condition, with no breaks, cracks or repairs noted. The grips are marked internally with the same two tiny slash style assembly marks found on the balance of the revolver. They show wear commensurate with the flashing erosion found on the rear of the cylinder in the cone (nipple) recesses, and match the revolver perfectly.

Overall this is a very attractive example of a rather scarce English percussion revolver. Even though the Confederacy probably imported several thousand of these pistols, they appear for sale only rarely, and when they do often show hard use and mediocre condition. These guns did not have the name recognition or cach” of similar pistols by Adams and Tranter and were probably more likely to have been used in the post war era than saved as mementos of the “late unpleasantness”. These sturdy, workingman’s revolvers certainly saw use during the war, and this one is reasonably within the range of the Nelson Clement deliveries and just below the serial number range of some of the best documented Confederate used Webley Wedge Frame revolvers, those on the Pratt Roll. The Webley "Wedge Frame" is so under appreciated that the late Corky Huey thought it was important to include one on the cover of the recently released book The English Connection, which details the arms and equipage purchased by the Confederacy from England. This pistol is 100% correct and complete, and functions exactly as it should. It would be a great addition to any collection of Civil War era revolvers and would be equally at home in a collection of typical Confederate used handguns. It is a very fine, large bore pistol that displays well and is rarely seen on the market for sale.