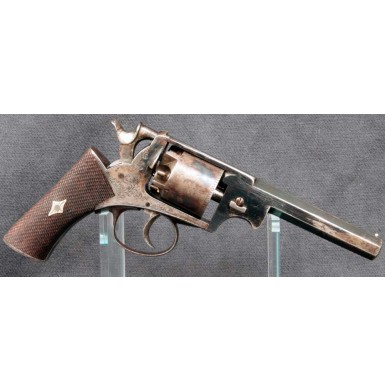 Stunning is the word that came to mind when I first saw this beautiful Wedge Frame English percussion revolver that would generically be referred to as a “Webley” Wedge Frame. The famous firm of Phillip Webley (later simply P Webley & Son) is often credited with the production of revolvers of this patter, which had two-piece frames. The barrel and top strap were forged as one piece and the lower frame, which contained the action and grip strap, was forged as another piece. A friction wedge, like those used on a Colt pattern revolver, was used to connect the two primary component parts. In reality, Webley may have developed the system, but probably did little more than retail such guns until at least the late 1860”. Instead, he relied on other Birmingham based makers to produce the guns, which Webley then marked with his company name. The double action, wedge framed revolver, was intended to be a lower priced option to the more expensive Adams and Tranter patent revolvers of the day. Those revolvers used a solid frame and barrel from a single forging, which made them much stronger, but also much more expensive. The “Webley Wedge” guns typically utilized a double action mechanism patented by Joseph Bentley in 1857. The Webley association appears to have come from their heavy advertisement of this style of revolver in the early 1860’s.

This is a classic example of a Webley Wedge Frame type revolver, which was manufactured and retailed by John Low Jackson of Nottingham, Nottinghamshire. Jackson held British patent #4823, granted on July 29, 1823 for an automated priming lock. The lock appears to be similar to the Ward patent priming system found on some US M-1816/22 percussion alteration guns, as the description mentions that that the Jackson system contained priming compound within the hammer. Jackson worked from 1821 to 1864 and was located at Church Gate in Nottingham from 1831-1864. Jackson was also listed as a gunmaker to His Royal Highness the Duke of Sussex. The pistol is a classic double-action, mid-sized wedge frame revolver and is chambered in 80-Bore (about .38 caliber). The pistol has a 4 ““ octagon barrel and is about 8 ““ in overall length “ similar in size to a Colt M-1849 pocket revolver. The gun has a five shot cylinder, which is has the usual Birmingham proof marks stamped between the chambers. In typical English style, the chambers marked with an engraved number, 1-5, in the center of the chambers, even with the cone. The gun has a Kerr style rammer attached to the left hand side of the frame, but the rammer bears no patent markings. In fact, other than the proofs or chamber numbers, the only other external markings is the engraved maker/retailer mark on the top strap: JACKSON NOTTINGHAM.

The pistol is NEAR EXCELLENT condition. The barrel, forward frame and topstrap section retain about 80% of their original deep, blued finish. The majority of the loss is along the sharp edges of the barrel and near the muzzle “ like from holster wear. The lower portion of the frame and gripstrap retains about 40% of the original blued finish, mixed with a plum brown patina. The loss is a combination of faded wear and flaking. The frame is engraved with a nicely executed, flowing foliate motif. The iron butt cap is engraved in the same style. The leading edge of the cylinder and the muzzle are both nearly engraved with smooth, flowing boarder lines. The cylinder retains about 90%+ of the original vivid case coloring, which is quite rare on English revolvers. The case hardened cylinders typically lost their colors very quickly due to the heat generated by firing the revolver. This results in most English revolvers, even in high states of condition, being found with pewter gray “silvered out” cylinders. The cylinder retains all of its original cones (nipples) and they are in fine, crisp condition. The hammer retains traces of its original case coloring, with the balance a smooth pewter patina. The action of the revolver works perfectly both in single and double action modes. The pistol is mechanically excellent. The bore of the revolver is in FINE condition, with crisp rifling and a mostly bright bore that shows only some light scattered pitting in the grooves. The original loading lever is present on left side of the frame and functions smoothly. The finely checkered two-piece walnut grips are in EXCELLENT condition with sharp checkering and showing only minor handling marks and light wear. The grips are solid and free of any breaks, cracks or repairs.

Overall this is a really wonderful mid-sized English percussion pistol with simply fantastic eye appeal. The gun is mechanically excellent and was produced by a famous Nottingham gunsmith. These high quality English percussion revolvers were highly prized throughout the south during the American Civil War, and the mid-sized 80-bore caliber was as popular as the classic .36 “Navy” caliber in America. This would have been a perfect secondary revolver for a Confederate cavalryman or a perfect officer’s revolver, as it combines light weight, a reasonable size and an effective caliber into one nicely manufactured package. The gun is about the same size as the classic Colt Pocket, but delivers a more powerful punch and adds the advantage of fast double action firing. This would be a great addition to any collection of secondary Civil War percussion revolvers and the condition is so nice that it will certainly be a centerpiece in nearly any collection.