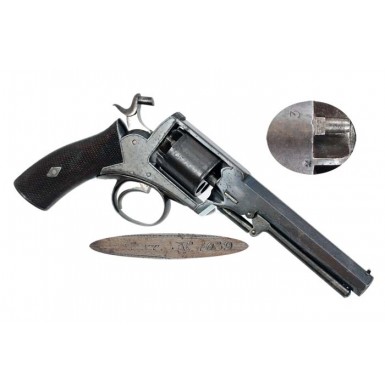 This double action Webley Wedge Frame is a classic “export” revolver, and is totally unmarked except for the Birmingham proofs and the serial number on the left side of the frame. It is unclear if the gun remains unmarked to keep it “sterile” so that its source could not be easily determined, or if it left blank to be marked by the retailer after export. The gun rates about VERY FINE and retains about 50%+ of its original blued finish on the barrel and top strap. The frame retains only traces of the blue and has a mottled plum brown patina mixed with flecks of finish in the protected areas and some lightly oxidized freckling. The difference in the way the finish wears on these guns is very consistent. Even high condition examples usually retain almost no frame finish, while the barrels and top straps retain lovely blue. I believe this may indicate that the iron/steel alloy used in the frames and barrels were different, resulting in the finish adhering, wearing and surviving very differently. The grip frame retains very little original finish and has a mostly gray patina, with some mottled age discoloration and minor surface oxidation. The cylinder retains about 20% of its original blued finish, which has blended with a lovely plum-brown patina. The cylinder also shows some scattered peppering, pinpricking and lightly oxidized surface freckling. The hammer is in the white, as originally manufactured and retains much of its original bright polish, with some dulling from age. The case hardened, Colt-style loading lever retains about 20% of its original case hardened finish. Most of that has dulled and blended with a smoky gray and tobacco brown color, with some muted highlights still visible. The metal is mostly smooth with only some light scattered patches of minor peppering and pinpricking and some areas of light surface freckling. The revolver is fully functional and mechanically excellent. The pistol functions perfectly in both single action and double action modes. It times and indexes as it should and has very tight lock up. The Colt-style loading lever functions smoothly and locks into place securely. The bore of the revolver rates about FINE. It is mostly bright and retains sharp 14-groove rifling along its entire length. There is some dirt and minor pitting near the muzzle (mostly in the grooves) and much of this might clean out with some scrubbing. The two-piece checkered wood grips are in about VERY GOOD condition with only some light to moderate age wear and flattening from carry and use. The grips are in solid condition, with no breaks, cracks or repairs noted. The only real condition issue worth noting is a fairly deep gouge, about ““ in diameter, on the left grip panel, near the frame juncture. This appears to be the result of some sort of impact during the period of use, as the wood is worn smooth around the edges of the ding.

Overall this is a very attractive example of a rather scarce English percussion revolver. Even though the Confederacy probably imported several thousand of these pistols, they appear for sale only rarely. These guns did not have the name recognition or cache of similar pistols by Adams and Tranter and were probably more likely to have been used in the post war era than saved as mementos of the “late unpleasantness”. These sturdy, workingman’s revolvers certainly saw use during the war, and this one is right in the middle of the serial number range of some of the handful of known, Confederate used Webley Wedge Frame revolvers. This pistol is 100% correct and complete, and functions exactly as it should. It would be a great addition to any collection of Civil War era revolvers and would be equally at home in a collection of typical Confederate used handguns. It is a very fine, large bore pistol that displays well and is rarely seen on the market for sale.