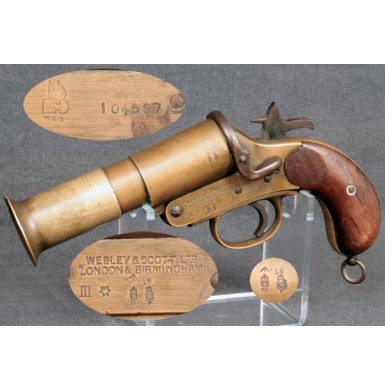 Here is a VERY FINE+ example of the English military Mark III* flare pistol, as issued and used during the last part of World War I. The Mark III signal pistol was adopted in 1911, as an improved version of the earlier Mark II pistol, which had been adopted in 1905. Like the previous Mk II pistol, it was a brass flare gun with a tilt-down, break open loading mechanism and a single action lockwork. The Mark III signal pistol was modified in February of 1915 with the addition of a butt swivel, and in December of 1916 the pistol was further modified with the addition of a flanged barrel extension, giving the pistol the look of a blunderbuss pistol. This variant was officially adopted as the Mark III*. The rational for the addition of the flanged muzzle extension was to prevent the hand of the user from overhanging the end of the muzzle when the barrel was depressed for loading and unloading. Although the Mark III* remained in production through the end of World War I, it had in fact been superseded by the Number 1 and Number 2 signal pistols which were manufactured from steel instead of brass. These patterns were adopted in 1915 and utilized many of the same parts as the Webley Mark VI service revolver. During the production of the Mk III* signal pistol, at least five companies including WW Greener, Wolseley (Sheep Shearing Co.), Chubb (very rare “ only 500 contracted for), Cogswell & Harrison and Webley & Scott.

This particular Mark III* signal pistol was produced by Webley & Scott for the British military. The flare pistol is clearly marked with the (WINGED BULLET) / W & S trademark of the firm on the right side of the frame. The frame is also marked with the serial number 104597 forward of the trademark. The last three digits of the serial number, 597 are present on the side of the extractor as well. The left side of the frame is marked in three lines: WEBLEY & SCOTT LTD / LONDON & BIRMINGHAM / III*. The frame and barrel are both marked with British Ordnance Department proof and inspection marks, the Broad Arrow of the Ordnance Department and the number 18 indicating inspection and acceptance in 1918. The firm of Webley & Scott was started by Philip Webley in 1838 in Birmingham. In 1859 the firm became P Webley & Son and in 1877 absorbed the Birmingham gunmaking firm of Tipping & Lawden. In 1897 they took over the firms of both W C Scott & Son and Richard Ellis & Son and the firm was renamed the Webley & Scott Revolver & Arms Co LTD. Philip Webley received a number of British gun making patents during his career the company that bore his name became one of the premier revolver makers in the United Kingdom as well as a major supplier to the British Ordnance Department.

The signal pistol is in VERY FINE+. All of the markings on the frame and barrel remain crisp and clear. The brass frame and barrel have a gorgeous, untouched dark mustard patina with a greenish-brown hue to it. The blunderbuss like, flared brass barrel extension is a slightly lighter color and has more of a golden tone where the barrel would be handled for opening and closing and a darker tone towards the muzzle flare. The flared muzzle exhibits a couple of minor dings, but nothing substantial or excessive. The balance of the brass is crisp and sharp with fine edges and only some light handling marks. The blued iron breech release catch has a smooth brown patina with some traces of finish still present, and the blued hammer and trigger each retain about 50% of their original blued finish, which has faded and blended with a smooth brown, lightly oxidized patina. The action of the pistol functions flawlessly. The breech still closes tightly and securely and the shell extractor functions as it should when the pistol is broken open. The single action lock work is mechanically excellent and the rebounding hammer functions correctly as well. The flare pistol retains the original iron lanyard ring and swivel in the brass butt. There is one triggerguard mounting screw missing from the pistol. The missing screw is the front one, but the rear most screw still secures the triggerguard tightly against the bottom of the frame. The two-piece walnut grips are in VERY GOOD+ condition. They are free of any breaks, cracks or repairs and are quite solid. The grips do show a handful of minor bumps and dings from handling and use, but no breaks, damage or abuse.

Overall this is really fantastic looking example of a really fine Mark III* signal pistol by the famous Webley & Scott company. This would be a fantastic addition to your collection of World War I militaria or of military flare pistols. Other than the one missing screw, there is simply nothing to complain about with this very crisp example. This is a signal pistol that you will be very proud to add to your collection.