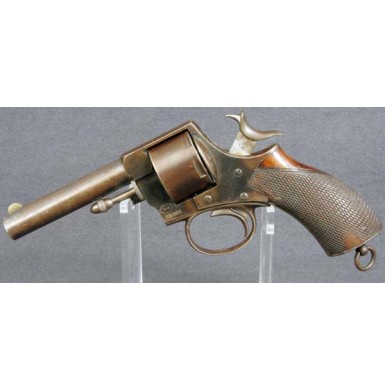 The Royal Irish Constabulary Model 1 revolver as produced by the famous firm of Philip Webley & Sons of Birmingham was one of the first really successful centerfire metallic cartridge revolvers to gain widespread acceptance in Great Britain. Philip Webley created an English gunmaking dynasty. He went into the gun business in Birmingham in 1834 and 1838 was well established at 84 Weaman Street, where he would remain for the majority of his career. In 1859 the company name was changed to P WEBLEY & SON, a name it operated under until 1884, when Webley merged with W&C Scott & Son and Richard Ellis & Son to become the firm of Webley & Scott. In 1877 Webley had absorbed the firm of Tipping & Lawden and expanded his business to occupy #82 to #89 Weaman Street. With the additional space needed by merging with Scott & Ellis, the business added more space, and occupied #81 to #91 Weaman Street. They remained at this Birmingham location through 1940, and remained in business at a number of Birmingham addresses until 1991. The Royal Irish Constabulary (RIC) pistol was introduced in 1867 and was adopted by the Royal Irish Constabulary in 1868. The pistol was probably the most popular and successful model produced by Webley and remained in production for about 30 years. Its adoption by the newly formed Irish civilian police force not only a great coup in terms of the acceptance of the revolver design, but also gave the revolver the name it would thereafter be known as. These pistols were robustly built, solid frame, double action revolvers with 6 shot cylinders. They were chambered in a variety of calibers from .410 to .476, with the middle calibers of .442CF (about the same caliber as the old “54-bore” percussion revolvers) and .455 Webley being the most popular. It has long been believed that Lt. Colonel George Armstrong Custer was armed with a pair of Webley RIC revolvers chambered in .442 caliber, at the Battle of the Little Bighorn. Lord Berkley Padget gave the pistols to Custer in 1869. Padget also presented Custer’s brother Tom with an English Galand & Sommerville revolver that was also chambered in the same .442 caliber.

The Royal Irish Constabulary Model 1 revolver offered here is the classic early production style, typical of late 1860’s and early 1870’s production. The pistol has a plain, un-fluted cylinder “ later production guns had fluted cylinders, and the final on the ejector rod is acorn shaped, instead of the round shape found on later pistols. The gun is clearly marked on the top strap in two line, on either side of the sighting groove: P WEBLEY & SON / BIRMINGHAM. The forward lower left side of the frame is marked with the WINGED BULLET / W&S Webley & Sons logo, and under that in three lines it is marked with an arched cartouche: WEBLEY’s / R.I.C / No 1 .442CF over the serial number 35060. The front of the frame is marked in two lines: 18962 / J.H., which appears to be some sort of acceptance mark and rack number from a police organization or some other group. The cylinder is marked with Birmingham proof marks between the chambers. The pistol is in about FINE condition overall, and retains about 30% of the original blued finish mixed with a lovely smooth plum brown patina. The largest amount of original finish is on the left side of the frame, which retains about 50% to 60% of its blue. The right side of the frame retains about 10% blue, as does the cylinder and the barrel. The metal is almost entirely smooth and free of pitting, with only some light scattered patches of minor peppering and pinpricking here and there. The pistol has a 4.5” round barrel, the distinctive Webley pinched flat rib on top. The original front site blade is mounted in a slot in this flattened rib, and the rear site is a large groove in the top strap. The bore is in about FINE overall condition and is mostly bright with only some light scattered patches of minor pitting present. The pistol retains the original loading gate, ejector rod and lanyard ring in the butt. The pistol remains in excellent mechanical condition. The action of the pistol remains crisp and tight, with excellent timing and lock up. Both the double action and single action mechanism work perfectly. The loading gate and ejector rod function correctly as well. The checkered walnut one-piece grips are in about VERY GOOD+ to NEAR FINE condition and are free of any breaks, cracks or repairs. They show some minor wear and use, and a small area of flattening to the checkering at the bottom center on each side of the grip “ likely the result of holster wear.

This is a very nice example of an early British cartridge revolver by the famous Webley company. These revolvers saw use around the world, from British and Irish police & military to use in the American West during the period of post-Civil War expansion. Whether you simply like early cartridge revolvers, English guns or want a nice example of the pistol that Custer carried into battle on that fateful day in June of 1876, this is just a nice honest example that is 100% original and correct and in very attractive condition.