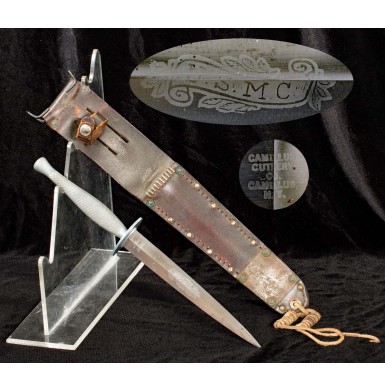 The Marine Raider Stiletto is one of the rarest and most sought-after US combat knives from World War II. The Raider Stiletto has the distinction of being the first US designed fighting knife to be put into production after the United States entered the Second World War. Lt. Colonel Clifford H. Shuey designed the knife in 1941. Shuey was the Officer in Charge of the Engineer Division, Quarter Master Department, Headquarters of the US Marine Corps. Lt. Colonel Shuey would go on to design several of the knives used by the USMC over the coming years and would retire from the Corps as a Brigadier General in 1956. Lt. Colonel Shuey based his knife upon the classic English Fairbairn-Sykesfighting knife, that many of the old 4th Marine Regiment had training and experience with due to the close combat instruction that many of them had received from Fairbairn & Sykes while they were on station in Shanghai, China. The Raider Stiletto, like the Fairbairn-Sykes knife, was a purpose made killing weapon with little value as a utilitarian knife or tool. The knife was designed to be lightweight, cheap and easy to manufacture. It utilized a stamped steel blade that was then machined to a diamond shaped cross-section. The blade was polished to a bright shine and was acid etched with a USMC banner scroll on the reverse of the blade and with the maker’s name and location in another scroll on the reverse ricasso.  The handle was cast from an aluminum-zinc alloy and was integrally cast onto the blade. The grip featured sharp diamond checkering cast into the sides of the hilt and serrations along the top and bottom. The grip was cast in a slightly oval shape, which fit the hand better than the machined round hilt of the Fairbairn-Sykes knife. The oval guard was integrally cast as part of the grip as well. The thin, stamped steel stiletto blade was very thin at the end and quite delicate. In fact, Marine Corps dictates specifically prohibited the throwing of the stiletto, as it would likely break the tip of the blade. In actual use, the stilettos often had many of their tips damaged by using the knives as tools to open and pry things and using them in any number of ways other than as a stabbing weapon. This inherent weakness in the blade design has made these rare knives even harder to find with original full-length blades that have not been reshaped or “re-tipped”. Marine Major General (retired) Oscar F Peatros recalled of the Raider Stiletto in the book Bless 'em All: The Raider Marines of World War II; "It was pointed out that it should never be thrown, as it was designed as a hand-held weapon to be used only in combat. It was also pointed out that it was brittle and would break even if just dropped, particularly the point."

The aluminum-zinc alloy hilts had an inherent weakness as well. The alloy was very brittle and leached zinc ions, making the hilt susceptible to cracking and degrading with age. Finding a Raider Stiletto without any obvious cracks in the guard or grip is very difficult these days and will only become harder as the grip alloy continues to age and essentially decompose due to the loss of the zinc ions over time.

In early 1942, a contract for 5,000 of the new Raider Stilettos was let to the Camillus Cutlery Company of Camillus, New York. The Raider Battalions themselves were not officially designated until February of 1942. Camillus would receive an additional contract for 9,370 knives, bringing the total production of these rather scarce knives to only 14,370. The initial production knives reached the Marine supply depots and Raider Battalions in training, in the summer of that same year. It was probably the fall of 1942 before any of the stilettos were actually issued to the Raiders who were already engaged in the Pacific. The Raiders were based on the famous British Commandos serving in China and were intended for lightning-fast “behind the lines”, “hit and run” amphibious actions against the Japanese. During WWII, the Raiders were instrumental in delivering stunning blows to the Japanese forces and fought gallantly in nearly every major Pacific landing operation from the Battle of Midway through Guadalcanal, the Solomon Islands Campaign, New Georgia and Bougainville. The four official “Raider” battalions were disbanded in January of 1944, and the two battalions in the process of being formed were reorganized into other standing Marine regiments. During their brief existence, a total of 7,710 Marines and 368 sailors served as “Raiders”.

The USMC Raider Stiletto offered here is in VERY FINE condition and is truly a great example that combines the rarely encountered features of both excellent blade etching and an equally excellent, undamaged hilt. The knife is 100% complete, correct and original in every way. Even the ever-fragile blade tip does not appear to have been broken, re-shaped or re-tipped, with the blade measuring a full 7 ¼”. The Camillus factory specifications for the knife list the blade at a nominal 7”, but knife author and guru MH Cole lists the blade as 7 ¼”. I would assume that there was some minor variation in length during production (especially the final shaping of the point) and +/- 1/8” would not be uncommon.This blade is the full, Cole referenced, length of 7 ¼”. The blade still retains much of its brilliant polish, including the cross-polishing and grinding marks. The bright blade made it difficult to photograph accurately without excessive glare and reflection. Some of the odd color tones on the blade are the result of reflections from the room where I photographed it, and the odd black blur on the blade near the ricasso is a reflection of the camera above the blade. There is some very lightly scattered minor surface discoloration that has dulled some of the blade, as well as some scattered light pitting on the last 3” of the blade. This pitting is not uncommon, as the knives were used in the erosive climate of the Pacific Islands. The etched USMC banner scroll on the blade is about 95%+ present and is one of  the best etchings that I have ever encountered on a Raider Stiletto. Even a knife that was essentially unused usually loses at least some of the etched scroll just from being inserted and removed from the scabbard over the years. The etched Camillus makers mark on the ricasso is just as visible and remains about 90%+ present and fully legible, although it is starting to dull slightly. The five lines remain crisp and clear, and read:

The cast alloy hilt is in about EXCELLENT condition, with sharp checkering and no readily visible cracks. I’m sure some microscopic ones are present under strong magnification, but realistically this is about as fine a condition Marine Raider Stiletto hilt as you are ever likely to encounter. The hilt has a lovely dull pewter-gray color to it and shows some very tiny, lightly scattered minute patches of oxidized leaching and some minor surface discoloration scattered along the grip. The guard / hilt / blade junction is excellent and free of the often-encountered casting flaws that are usually found in these knives as the hilts degenerate.

The knife is retained in the correct, later production leather scabbard. The scabbard remains in GOOD+ and well used condition. The wear and age is undeniable, with the leather showing the typical darkening and wear associated with being in a damp and salty environment. The scabbard features both the stapled throat reinforcement and the pair of metal plates on the tip typical of later production Raider scabbards. Most of the scabbard stitching is tight and strong, with some loss on the rear where the top of the scabbard rolls over to secure the belt hanging hook. The scabbard has all of the rivets are present, but one of the rivets that secures the hanging hook flap missed the flap of leather and only goes through the front of the scabbard. This is clearly a manufacturing defect. The scabbard is completely unmarked and does not have the “Flaming Ordnance Bomb” mark that would designate it as an Army scabbard for an M3 knife, rather than a Raider Stiletto knife. The correct small strap that retains the hilt of the knife is in place and remains pliable, with the original closure snap functioning correctly. The leather of the scabbard is somewhat stiff, with a dark brown, aged color to it suggesting exposure to moisture. The top portion of the scabbard retains the original M1936 pistol blackened iron belt hook which allowed the scabbard to be attached to the belt. The rivets and reinforcement plates on the scabbard show moderate freckled surface oxidation. The only real damage, other than actual service wear, worth noting is that the grommet at the bottom of the scabbard that the leg tie-down thong passes through is worn, bent, heavily oxidized and has come loose from the scabbard. Otherwise, the scabbard remains in solid, usable condition, showing slightly more wear than the knife, but appropriate wear for the light pitting present on the tip of the blade.

Overall this is really wonderful example of a very scarce US WWII combat knife. USMC Raider Stilettos do not appear on the market for sale very often and due to the many factors, that affected their durability, and survivability. When the knives do appear for sale, they are often in rather rough condition. Usually when a Raider Stiletto with a fine blade and good etching is found, the hilt has started to disintegrate in a major way. Conversely a knife with a fine hilt will typically have a well-worn blade that is short or shows little or none of the etched USMC scroll or Camillus mark. This knife is a true gem, with a full-length blade, excellent etching and a hilt that is about as good as one could ever hope to locate. The only real condition issue is the lightly scattered pitting along the last 3” of the blade. This is minimal when compared to the outstanding condition of the blade etching and the hilt. This is really a very fine example that would be very difficult to upgrade from, without spending substantially more money. Rarely does a Raider Stiletto of this quality and condition with a complete original leather scabbard appear on the market. If you have been looking for a USMC Stiletto in really nice condition, worthy of a place in a very advanced World War II fighting knife collection, then look no further; this is your knife.