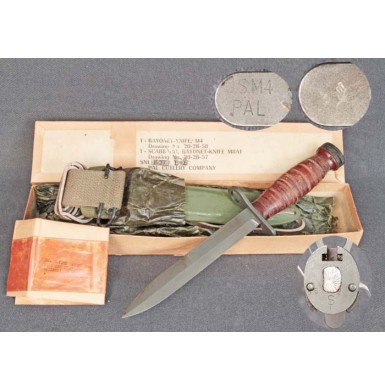 US M4 Bayonet by PAL - UNISSUED With scabbard & box

This is a rarely encountered, unissued example of a World War II production US M4 Bayonet by the famous PAL Blade Company. The M4 bayonet was adopted by the US military during World War II as a dual purpose bayonet-knife, intended for issue to those troops carrying the M-1 carbine. Most students of World War II weapons are familiar with the development of the US Carbine, Caliber .30, M-1 that had begun the summer before the US entered the war. The carbine was intended to provide a lightweight combat weapon that was more useful and accurate at longer ranges than the M-1911A1 pistol, but not as heavy and cumbersome as the US M-1 Garand rifle. The carbine, as initially designed, did not accept a bayonet. It was additionally felt that its lightweight barrel would not be able to support the use of a bayonet without damage. Since the carbines were not issued with bayonets, the M3 Trench Knife was developed for issue to those troops who would be armed with the carbine, to give them a multi-purpose edged weapon for utility and combat use; a roll the bayonet would have filled. By October of 1943 the US Army started the process of development and trials to select a design for a bayonet to be used with the M-1 carbine. Three of the designs (designated T4, T5 and T6) were clamp on bayonets, which used the assembly from the M8 grenade launcher to attach the bayonet to the barrel. The T4 used a round spike blade design, the T5 used a diamond spike blade design and the T6 used the blade from the M3 trench knife. A fourth design, designated T8 used an M3 trench knife with a modified cross guard and a catch on the butt to secure it to the gun. This design was the only one which allowed the bayonet to function as a utility knife as well, and after further testing and improvements (designated T8E1), this design was adopted by the US Army at the Bayonet-Knife, M4 in May of 1944. The army quickly sent the new specifications of the Bayonet-Knife, M4 to the seven manufacturers who were producing the M3 Trench Knife, with instructions to start producing the M4 instead of the M3 as soon as possible. By late July 1944 M4 bayonets were starting to be delivered and by August of 1944, the last of the M3 Trench Knives were delivered as well. The Bayonet-Knife M4 saw almost immediate issue in the field as it had superseded the M3 Trench knife, even though no bayonet modified M1 carbines are believed to have reached war zones any earlier than possibly the battle for Okinawa. No bayonet modified M1 carbines saw combat in the European theater, although the bayonets were issued as knives in that theater prior to the end of hostilities.

For all practical purposes the Bayonet-Knife M4 was simply a modified M3 trench knife. The bayonet retained the same 6 ““ spear point dagger style blade (blades vary by manufacture up to ““ +/-) that was 7/8” wide with a false edge of approximately 3 “. The bayonet had an overall length of about 11 ““ and had a handle made of stacked leather washers with 6 gripping grooves (the M3 knife had specified 8 grooves in its grip). The crossguard was modified with a muzzle ring on the upper portion, and the pommel cap had a T-slot milled in it with a two latch locking mechanism. This mechanism secured the bayonet to the lug on the barrel band of the carbine. Due to their complicated locking mechanism, the pommel caps were not produced by the knife makers, but rather by the Standard Products Company of Port Clinton, OH. Standard Products was one of the major producers of M1 carbines, and their experience as automotive parts producers made them a perfect choice to produce this part. Eventually the Hemphill Company of Rhode Island made the pommel caps as well. During the production of the World War II era M4 bayonets, there was only one official design change. In February of 1945 the method of attaching the rear plate to the pommel cap of the bayonet was changed. The initial design used a pair of tapered pins, which were driven into the rear plate and pommel cap to hold it in place. These pins could be removed to repair the latch assembly if needed. Unfortunately, the pins could work themselves loose and result in the loss of the plate, and the associated locking pieces inside. As of February of 1945 the plates were staked in place with two pins, which could not be removed and the latch mechanism was no longer considered repairable. The only other variation to occur during World War II production was a change in the way the grooves were cut in the leather washer grips. The early production bayonets had grooves that were square cut, while later grips had a tapered, V-shaped cut, which kept the grooves from wearing excessively. This was not an official change to the specification, but rather an improvement that was universally adopted by the makers not long after production began. The scabbard was simply a modified version of the fiberglass US M8, as had been used with the M3 trench knife since the abandonment of the leather M6 scabbard. The new version, designated M8A1 added a wire belt hanger to the belt loop, allowing the scabbard to be attached to the eyelets of either the standard rifle or pistol web belt.

During the course of the war some 2,469,956 Bayonet-Knife M4‘s were delivered by seven manufacturers. Production contracts for the bayonet were terminated across the board on September 1, 1945, and minimal numbers of bayonets that were already in the production pipeline were delivered after that date. Of the nearly 2.5 million bayonets produced, the production totals break down as follows:

The two largest makers, Imperial and Utica, were responsible for nearly 60% of the total production of M4 bayonets during the war, with the top three producing nearly “ of all the bayonets. This makes the ones produced by the four smaller makers much more difficult to find on the market today. Thanks to Gary Cunningham’s Bayonet Points #16 & #17 for the well researched information on M4 bayonets that provided most of the details noted above.

This example of the Bayonet-Knife M4 is in unissued condition and retains its original scabbard, wrapping papers, label and pasteboard box. The bayonet was produced by the PAL Blade Company of Holyoke, MA. Pal was the in the middle of the seven producers of M4 bayonets, with 268,000 produced, or about 11% of the total war time production. PAL’s first contract for the bayonets was for 52,880 and was awarded July 11, 1944. The price was $2.32 per bayonet. The contract was set to finish in February of 1945. Three additional contracts were subsequently awarded to Pal, including an October 21, 1944 contract which converted all of their outstanding M3 knife contracts to M4 bayonet contracts (66,589), a contract on December 16, 1944 for 100,531 bayonets and a final contract for 48,000, let on January 22, 1945. All of PAL’s contracts finish dates were between December of 1944 and May of 1945, making all of their bayonets war time production. The bayonet is in EXCELLENT & UNISSUED condition. The blade retains about 99% of its original medium gray factory parkerized finish, with some traces of the original Cosmoline like storage lubricant still in the nooks and crannies. The blade retains a perfect original factory edge with no additional sharpening or alteration. The bottom portion of the crossguard is crisply marked on the front side: US M4 / PAL and with the Flaming Ordnance Bomb acceptance stamp on the reverse. The pommel cap has a crisp, unmolested “starburst” peen. The rear plate has a clear intertwined SP Standard Products logo, as well as the heat lot code number 58. The rear plate is the pre-February 1945 pattern, with the tapered retaining pins. The locking mechanism functions perfectly, and again there are traces of the protective grease in the nooks and crannies. The leather washer handle rates NEAR EXCELLENT and shows only some light surface scuffing from storage and handling. The scabbard is in EXCELLENT and is unissued as well. The body of the scabbard retains 98% of the original olive drab paint, and the original protective shipping tape is in place around the scabbard throat. The scabbard shows only some minor surface scuffing from storage and handling. The original, unused leather leg tie down is in place on the scabbard as well. The web hanger is complete and full length with tight stitching throughout and the original blackened wire belt hanger is in place. The web hanger shows some minor discoloration due to oxidation of the reinforcing rivets, which have a light coating of light surface oxidation from storage. The original handle retention strap is in place and functional, but the snap shows oxidation as well. The bayonet and scabbard are retained in their original pasteboard shipping box which is clearly labeled on the outside:

The box is in EXCELLENT condition and remains crisp and tight. The box also contains the original typed label for the contents as well as the green protective wax wrapping paper for the bayonet and scabbard.

Overall this is simply an outstanding, unissued condition example of an M4 Bayonet by one of the less often encountered makers. The PAL Blade Company only produced 268,000 of the nearly 2.5 million bayonets produced during the war, or about 11% of the total production. While it is not impossible to find high condition examples of these bayonets on the market, finding an unissued one with the original box and packaging is not easy. This is a fantastic bayonet to add to your World War II collection, and since it has the early pattern rear plate attachment, we know it was delivered prior to the pattern changeover in February of 1945.