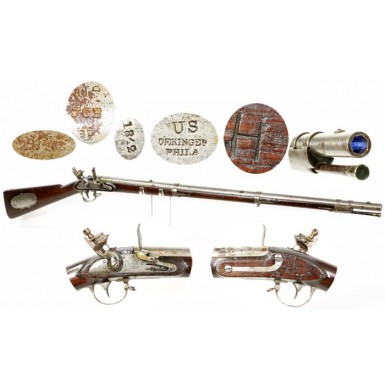 US M1817 Common Rifle by Deringer

The US M1817 Common Rifle was a unique long arm in that it was never produced at a National Armory, other than some sample models that were made up at Harpers Ferry, with all of its production being handle by contractors. 38,267 of the rifles were produced by five different contractors between 1819 and 1845. The contractors included Henry Deringer of Philadelphia, as well as Robert Johnson, Robert & J.D. Johnson, Simeon North and Nathan Starr & Sons, the last four all being located in Middletown, CT. Although the rifles were adopted in 1817, it appears that in some cases the US Ordnance Department thought of the rifle as the “M1819”. The 1841 Ordnance Manual refers to them as “Common Rifle, Full-Stocked; 1819”, which apparently refers to the first year the rifles were delivered. Most other period sources do use the model designation “M1817”.

The US M1817 “Common” Rifle was an elegant and graceful flintlock rifle. It had a 36” long, .54 caliber, round barrel, rifled with seven deep grooves with a high rate of twist for shooting a patched round ball. The barrel was secured to the stock by three barrel bands and a single tang screw, with the barrel and all of the rifle’s furniture being finished in a lacquer brown. The lock and hammer were color case hardened. The rifle had an oval patch box inlet into the obverse buttstock for the storage of cleaning implements and greased patches. As originally produced, the rear tang of the triggerguard extended to form a pistol grip, from which a sling swivel was suspended. Later production rifles eliminated the extended finger-rest tang, and relocated the lower swivel to the more conventional location of the triggerguard’s front bow. The upper swivel was mounted on the middle barrel band. The rifle was produced with a fixed, V-notch, rear sight and a front sight that was either a brass blade on the upper barrel band or a fixed blade on the barrel near the muzzle. As originally produced, the rifle did not accept a bayonet of any kind. The ramrod was a trumpet shaped iron rod with a brass tip to prevent damage to the rifling during the ramming process. The opposite end of the rammer was threaded for the attachment of implements, including a wiper, and ball puller.

The US M1817 Common Rifle was extremely popular during its period of use, and many of the guns were delivered to the various states under the terms of the Militia Act of 1808. The rifle saw significant use during the Seminole Wars in the south and during the Mexican American war as well. The rifles continued to serve well into the percussion age, and the National Armories, at the request of the states, altered many of these guns to percussion. The term other Common Rifle was a period appellation and was used to differentiate between the “common” muzzle loading rifle and the “less common” and certainly more unique Hall’s Patent breech loading rifle. With just over 38,000 of the rifles being produced by all of the contractors, the guns are far from “common” in the greater scheme of things, when you consider that approximately 900,000 US M1816/22/28 flintlock muskets were produced during the same time frame by the National Armories and about two dozen contractors. That production ratio indicates that roughly two-dozen US M1816 muskets were produced for every M1817 rifle!

With the coming of the American Civil War, thousands of US M1817 rifles (many already altered to percussion) were in state armories around the country. Thousands were in the hands of the Southern states that had seceded, but many were in Northern armories as well. Extant examples exist with state ownership marking of both North and South Carolina (markings are from the Seminole War era), as well as the state of New Jersey. Another 5,000 US M1817 Rifles were in storage at the Benicia Arsenal in San Francisco in 1861, and many of these rifles were issued to the 1st California Volunteer Cavalry, who fought in the far western theater against Confederate forces in New Mexico and Arizona. Even as late as March of 1863, “Common Rifles’ were showing up in Confederate arsenal inventories. With the significant number of M1817 rifles altered to percussion during the 1850s and the early Civil War years, finding a rifle in its original flintlock configuration is very difficult. As such, these guns demand a significant premium when found in original flint condition.

The US M1817 Common Rifle offered here is one of the guns produced Henry Deringer. Henry Deringer of Philadelphia, PA is probably one of the most famous gunmakers in American history. His name is so well known that even those who know nothing about firearms still use his name generically when referring to small pistols as “derringers”. While Deringer’s fame is most wide spread due to his finely crafted single-shot percussion pocket pistols, it was his long-standing relationship with the US Ordnance Department (and those lucrative contracts) that allowed him to grow his gun making business the way he did. Deringer produced thousands of rifles for the Ordnance Department during the early-to-mid 19th century, starting with 2,000 of the US M1814 flintlock rifle, the immediate predecessor to the M1817 rifle. He subsequently produced 12,800 of the US M1817 Common Rifles for the Ordnance Department, which he delivered across four contracts. His first Common Rifle contract was for 1,800 guns and was authorized on July 23, 1819. The contract price was $17.00 per rifle, with the guns to be delivered at the rate of 100 per month until all 1,800 had been delivered. His second contract was dated April 3, 1821 and it called for 2,000 rifles at a price of $15.50 each. His third contract was dated August 28, 1823 and specified that 3,000 rifles be delivered at $14.50 each over a five-year period. It would not be until 1840 that Deringer would again receive a contract to produce the M1817 Rifle, and this time it would be for nearly as many guns as he delivered under the first three contracts. The contract of March 7, 1840 called for 6,000 rifles to be delivered at the rate of 1,200 per year for five years, at a price of $14.50 each. These final contract guns were delivered with a variety minor differences in markings, hardware and furniture and it is supposed that Deringer not only used up some old stores of M1814 rifle parts, but also obtained some of the parts necessary to complete the contract from other Common Rifle contractors like Robert Johnson, Simeon North and Nathan Starr who still had parts on hand from their earlier contracts.

The gun is in about VERY GOOD condition overall, an most importantly remains in its original flintlock configuration. The lock of the rifle is marked clearly, forward of the hammer in three horizontal lines: U.S. / DERINGER / PHILA. The tail of the lock is marked in a single vertical line: 1842. The lock has a medium pewter patina and shows some smoky mottling as well as some scattered minor surface oxidation and age discoloration. The brass flash pan shows an old, light cleaning on its exterior, which is starting to tone down, and some erosion, debris and staining on its interior. The barrel is clearly marked at the breech with a US / JCB / P, with the “P” in a sunken starburst. The initials “JCB” are those of Joseph C. Bragg, civilian ordnance inspector of contract arms. Bragg worked as an inspector circa 1837 through 1855, when he took a job at Colt for better pay than he was receiving from the government. The left flat of the barrel, just above the stock line, is stamped with a JH sub-inspection mark. This is the mark of civilian ordnance inspector of contract arms Joseph Hannis. Hannis was one of the most prolific inspectors, spending more than twenty-five years in that position. His matching script cartouche is present on the counterpane of the stock as well. The barrel tang is marked with the same date as found on the tail of the lock, 1842. The barrel retains none of its original lacquer browned finish, and was likely cleaned to bright long ago, and now has a medium bright pewter patina. The markings on the barrel remain crisp and clear, but the barrel has suffered from poor storage. The barrel remains nearly completely smooth from the middle band forward to the muzzle, but shows scattered patches of light to moderate surface oxidation and corrosion from the middle band back to the breech. Nearly all of this surface crust is found left of the center line of the barrel, as if the rifle was leaning somewhere that allowed that portion of the barrel to be exposed to moisture; allowing the corrosion to occur. Some of these patches are minor enough that could be mostly removed with a careful cleaning, likely leaving only discoloration on the metal. Other patches are more severe and might leave some pitting if cleaned off. The bore of the rifle in in its original .54 caliber configuration and is in about VERY GOOD+ to NEAR FINE condition. It remains mostly bright and retains very deep, crisp rifling, with only some lightly scattered pitting along its length. The furniture has as the same lightly cleaned pewter patina as the barrel, and shows some lightly scattered age discoloration and minor surface oxidation as well, but not nearly as much as the barrel. The buttplate has the same patina as the balance of the furniture, and is clearly marked with a U.S. on the top of the tang. The lock of the rifle is in excellent mechanical condition and functions crisply on all positions. The touchhole is unmolested, and shows some typical oxidation and minor pitting. The hole is well centered in the pan and correctly angled and tapered. The rifle retains its original V-notch rear sight, as well at its original front sight near the muzzle. The original lower sling swivel is present on the rifle attached to the bow of the triggerguard. The upper swivel, located on the middle band, has been broken off and only the swivel stud remains. The original trumped head, brass-tipped 36” ramrod is present with the rifle as well, and retains its original threads at the end. The exposed steel portion of the rod’s shank is oxidized and shows moderate pitting, while the protected portion of the rod remains in very good condition. The stock of the rifle is in VERY GOOD condition as well. The stock remains solid and full-length, and is free of any breaks, major cracks or repairs. The stock shows numerous bumps, dings and handling marks from issue and use. The stock shows some rounding of the edges due to wear, but does not appear to have been sanded. The stock does have a couple of minor, surface grain cracks around the lock mortise, but these are quite minor. There are also a couple of old, tiny chips of wood missing at the breech plug tang and around the leading and trailing edges of the lock area. The flat opposite the lock has the readable script JH cartouche of Joseph Hannis. This cartouche is partially obscured by a deeply carved initial H, which appears to be quite period. No second cartouche of the accepting ordnance officer is present.

Overall this is a nice, solid example of a US M1817 “Common” Rifle that remains in its original flint configuration. These rifles are rarely encountered in original flint and although this gun shows use, it remains complete and original throughout. Considering the prices that some percussion altered M1817 rifles are selling for and what high condition original flint guns are selling for, this is a solid example that is reasonably priced and will fill the hole of a US flintlock martial rifle in your collection.