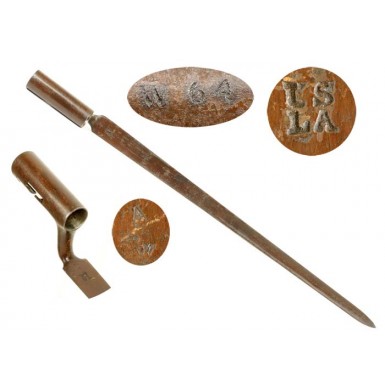 This is a VERY FINE to NEAR EXCELLENT condition example of what is technically the US M1827 Socket Bayonet. The M-1827 socket bayonet was an improved version of the earlier M1822, which was the improved M1816 socket bayonet. While all three of these bayonets look very similar and often not distinguishable without the use of calipers, to the US Ordnance Department they were all separate patterns. The M1822 was an attempt to make the M1816 bayonet more standardized in terms of dimensions and in its ability to interchange on M1816/22 muskets. The M1827 is identifiable by the increased diameter of the neck (or shank) of the bayonet, which was done in an effort to increase the strength of the blade to socket junction. Those bayonets that match the M1822 pattern, with a neck diameter of more than .450” are officially M-1827 bayonets. This bayonet has a minimum neck diameter of .534”, which places it squarely in the M1827 production series. This bayonet was produced at the Springfield Armory between the years of 1827-1831. The years from 1821-1831 were the National Armory Brown period, during which time both muskets and bayonets were finished with a rich lacquer brown color instead of with polished “National Armory Bright” metal. This very nice example of a bayonet from the National Armory Brown period retains well over 80%+ of the original lacquer brown finish, which has faded, dulled and worn, somewhat. The areas where the finish was worn or faded have developed an oxidized brown patina. The bayonet is full length and has a crisp, undamaged socket. The face of the blade is clearly marked US / LA. The LA mark is that of Springfield Arsenal bayonet forger Lucius Allen, whose primary job appears to have been to mill bayonet sockets. The blade is also marked with the inspection initial A / W at the base of the blade where it meets the shank. The socket of the bayonet is marked with the alphanumeric rack number W 64 forward of the mortise cut, a mating number to match it to the musket to which it had been fit. The blade is mostly smooth, except for some very lightly scattered peppering and pinpricking, along with some speckled areas of minor surface oxidation. The socket shows some scattered areas of minor oxidized freckling as well.