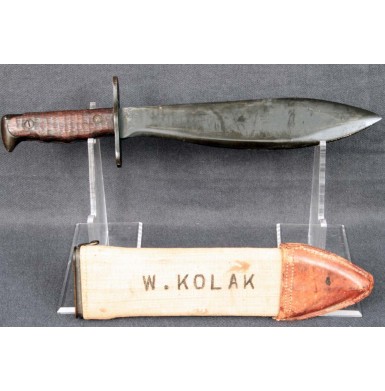 This is a fine condition example of the US M-1917 Bolo Knife & Scabbard. The M-1917 Bolo was a simplified, contractor produced variant of the earlier US M-1910 Bolo that was manufactured at Springfield Arsenal. The primary difference between the earlier M-1910 and later M-1917 was the elimination of the scabbard catch mechanism on the M-1917 knife, making it cheaper, quicker and easier to produce. The Bolo knife was designed to be a multi-purpose field tool, handling the jobs of the machete, camp axe and tradition field knife, all in a single package. The knives were typically issued to machine gun crews for clearing fields of fire, and were distributed at a rate of one for every two squads for the line infantry. The bolo knife was the alternate tool that was issued in limited quantities within squads, like the pick-mattock and hand axe. The balance of the men in the squad carried entrenching shovels. The knives were issued in large quantities to American soldiers that were part of the American Expeditionary Forces that served in Europe during World War I. The knives were produced with a 10 3/8” bolo style blade, with a straight hilt and two-piece, rough-hewn wooden grip panels, secured by two screws. The blades and all other metal parts were blackened. The standard scabbard was a wooden body with a sheet metal throat, contained in a tan webbing cover with a leather tip. The tip had a small, blackened brass reinforcement grommet on the bottom of the reverse, to act as a drain to remove any water that may have accumulated in the empty scabbard, when the knife was used in the rain or wet condition. A significant number of M-1917 Bolos were produced in 1917 and 1918, resulting in large stores that were available for use during the beginning of World War II. The contract M-1917 bolo knives were produced by the Fayette R Plumb Company (Philadelphia & St Louis), and by the American Cutlery Company (Chicago).

This fine condition M-1917 Bolo Knife is one that was produced by the Plumb company in Philadelphia. Fayette R Plumb was a tool manufacturer that went into business in Philadelphia, PA in 1869, in a partnership with Jonathan Yerkes by purchasing 50% of Yerkes Company. Early production items were marked with the names of both partners. Sometime around 1887 Plumb took full control and ownership of the company, which remained in the Plumb family until 1971, when it was purchased by the famous Ames Manufacturing Company. Since 1981, the Cooper Group has owned the Plumb Company. During the life of the company, it produced a variety of tools (especially hammers and axes) under a variety of trade names, including Yerkes & Plumb (Anchor Brand), James West & Co., Vulcan Tool Co., Quaker City Mfg Co., and Philadelphia Tool Co. The company expanded in 1910 by adding a second manufacturing facility in 1910.

This M-1917 Bolo Knife is marked on the obverse ricasso U.S. / MOD 1917 and on the reverse ricasso PLUMB / PHILA / 1918. The blade retains about 90%+ of the blackened finish, and does not appear to have been sharpened. The rough-hewn tow-piece wooden grips are in fine condition as well, and are secured by two blackened screws and washers. The knife is contained in the typically encountered Type I scabbard, a canvas covered wooden scabbard with a sheet metal throat. The scabbard is in very good condition, and the tan canvas shows only some light staining and minor wear. The original wire mounting hook, which allowed the scabbard to be attached to the eyelets of the rifleman’s belt, is in place at the upper rear of the canvas scabbard cover and is in fine condition. The leather scabbard tip is also in very good condition, with tight stitching, and showing only some scattered scuffling. The rear of the leather tip is marked in three lines with the makers mark, date of manufacture and the US Ordnance inspectors initials: A-K-CO / 1918 / R.H.S.. The scabbard is ink stamped on the front with the name of the man it was issued to: W. KOLAK. The only “W Kolak” I could find with any US military service was Chief Motor Machinists Mate Walter Kolak of the US Navy who served during World War II. I would doubt that he carried this bolo, but it would be difficult to know for sure. Since USN machinists made many of the theater knives that were carried during World War II, this bolo may have been given to CMOMM Kolak as payment for a theater knife that he produced.

Overall this is a great looking, high condition US M-1917 Bolo Knife that will be a great addition to any World War I or II or US military edged weapons display. It would be very difficult to upgrade this one and the possibility for an identification with the knife makes it that much more intriguing and worthy of additional research.