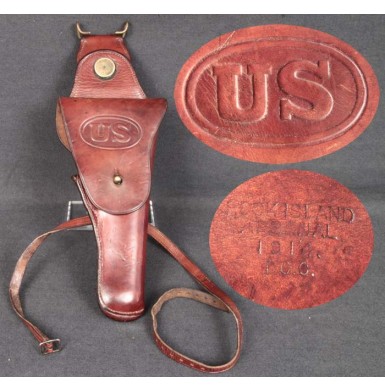 This is a FINE condition example of the US M-1912 Pistol Holster, the original holster issued with the newly adopted US M-1911 .45 ACP pistol. The holster was designed for cavalry use and featured a separate swiveling belt hanger piece, which attached to the pistol belt. The hanger was attached to the main holster body by a large brass swiveling connector, which allowed the holster to move with the leg of the wearer. This was particularly important for a mounted cavalryman. The US M-1912 Holster was in official use by the US cavalry from 1913 through 1940, although some holsters certainly saw combat use during WWII. The holster is clearly marked in four lines on the back: ROCK ISLAND / ARSENAL / 1914 / T.C.C.. The holster was manufactured in 1914 at the famous Rock Island Arsenal. The Rock Island Arsenal was established by an act of Congress in July of 1862. Rock Island is a 945-acre island in the middle of the Mississippi River, situated between Rock Island & Moline, IL and Davenport, IA. In December of 1863 Rock Island became a Civil War prison camp, and eventually held a total of 12, 215 Confederate prisoners between December of 1863 and the end of the war. In 1865 it was decided to build a combined arsenal and armory on the island. In 1875 a leather and harness shop was established at the arsenal, and the manufacturing of military harnesses, holsters, pouches and assorted other leather goods and accoutrements began. The harness shop also repaired and refurbished military saddles. In 1891 all of the accoutrement production equipment from the Watervliet Arsenal was moved to Rock Island, and the Watervliet production facility was closed. With the closing of the Watervliet plant, Rock Island became the primary production facility for US military leather accouterments and remained so through World War I. The Rock Island leather and harness shop was closed in 1922.

The US M-1912 Holster offered here is in about FINE condition. The holster remains in solid condition with supple leather. All of the original stitching is in place and remains tight and secure. The holster retains nearly all of its original finish, which is a deep, rich brown color and is of the quality one would expect to find on high-end leather goods and furniture. The holster is 100% complete, correct and original, and even retains the original leg tie down strap. The tie down has the same lovely finish as the holster, but as would be expected, does show somewhat more wear, and some minor finish crazing. The tie down retains its original iron buckle. The holster also retains its original swivel belt mount with the brass wire pistol belt hanger. The leather belt hanger shows the expected wrinkling and flex wear from use, but still retains nearly all of its original finish and remains quite supple and usable. The brass original brass swivel is in place and functions very smoothly. All of the brass furniture has a nice, untouched, mellow mustard patina. The brass hardware and the copper construction rivets all show traces of green verdigris, as would be expected. The verdigris is a chemical reaction between the metal and the chemicals used to tan the leather, and is typical on older leather, especially on a holster that is just under 100 years old. The holster still has a crisply embossed US in an oval on the closure flap, and the flap still closes securely on the brass closure button.

Overall this is a very solid and extremely attractive example of a scarce, early production US military holster for the M-1911 pistol. The holster remains fully functional and is in really lovely condition, showing some light use but absolutely no abuse. For any collector of early 1911’s and accessories or for a Great War era cavalry collector, this would be a great holster to add to their collection. It is a really fantastic looking example that I am very sure you will be proud to own.