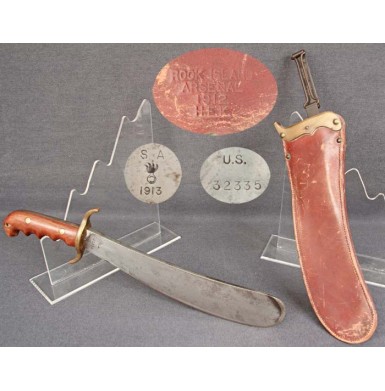 This is a FINE condition example of the U.S. M-1904 Hospital Corps Knife, often referred to by collectors as the M-1904 Bolo. The M-1904 was adopted by the US military in 1904, and all of the bolo style knives were manufactured at Springfield Armory, in Springfield, MA. During the production run from 1904 to 1914, some 40,000 Hospital Corps Knives were produced at Springfield, although none have ever been noted that were dated 1906. The M-1904 was the second knife specific to the medical department to be manufactured at Springfield, with the M-1887 being the first. Only 1,056 of the M-1889 knives were produced (650 “Type I” knives in 1889 and 406 “Type II” knives in 1891), and they are extremely rare. The M-1904 was the first widely issued medical department knife. While legend and lore the knives had no direct medical purpose, but rather were designed for use in clearing brush, cutting field expedient splints, and in some cases, stretcher poles. It was a simple utility machete for the medical corpsman to use. The knives were heavy duty with a 12” long rounded tip bolo style blade that was 2 ““ wide at the widest point and 3/8” thick. The bolo knife had an overall length of 17 “. The knives had a re-curved brass handguard and two piece walnut scales (grip panels), which had 4 finger grooves and Mameluke style curved pommel cap. The scales were secured to the tang by three large brass rivets, and a hole for a lanyard loop was in the pommel cap. The knives were marked U.S. on the obverse ricasso, over a serial number. Interestingly the first 236 knives were produced without serial numbers, and only prompting from Surgeon General of the US Army resulted in the addition of the serial numbers. The reverse ricasso was marked with the Springfield Armory mark, over a Flaming Ordnance Bomb acceptance stamp, over the year of manufacture. The knives were issued with a heavy-duty leather scabbard with a large brass throat. The majority of the scabbards had metal, Krag bayonet style metal belt hangers, but some of the early knives were issued with scabbards that had a simple leather belt loop.

The M-1904 Hospital Corps Knife offered here is in FINE condition. The knife is clearly marked on the obverse ricasso: U.S. / 32335, and the reverse ricasso is marked S A / (Flaming Ordnance Bomb) / 1913. The serial number places the knife in the final quarter of all knives produced. The blade retains much of the original arsenal bright polish and retains its original arsenal applied edge with no additional sharpening. The blade shows some light, scattered oxidized age discoloration and some scattered minor peppering and pinpricking. The wooden grip is in FINE condition as well. The grips are free of any breaks, cracks or repairs. There is a small surface chip missing from the wood at the leading edge of the ferrule for the lanyard loop on the obverse grip panel. Otherwise the grips are in lovely condition, showing only some minor bumps, dings and handling marks. The brass guard, rivets and pommel cap show a lovely umber patina that is very attractive. The scabbard is in equally FINE condition as well. The scabbard is 100% complete and retains all of its original stitching. The stitching is solid and secure and tight throughout. The surface of the leather shows a few minor scuffs and some very small areas of minor finish loss. The brass scabbard throat has the same lovely umber patina as the mountings of the knife. The original Krag style belt hanger is in place on the scabbard and retains about 85% or its original brightly blued finish, with some minor fading, wear and finish loss. The belt hanger is complete and fully functional. The bottom reverse of the scabbard is clearly marked in four lines: ROCK ISLAND / ARSENAL / 1912 /H.E.K.. The initials “H.E.K.” are those of Rock Island Arsenal inspector Henry E. Kelsey, who inspected all varieties of leather accouterments that were manufactured there during the early decades of the 1900’s. Kelsey transferred to the Quartermaster Corps at Jeffersonville, Indiana, when the leather shop at Rock Island was closed in 1921 and relocated to that location.

Overall this is a really nice example of a US M-1904 Hospital Corps Knife, complete with a wonderful scabbard. The knife is in FINE condition and displays wonderfully. It would be a great addition to any collection of US Army medical items, pre-WWI items or any collection of US edged weapons, especially those produced at Springfield Arsenal.