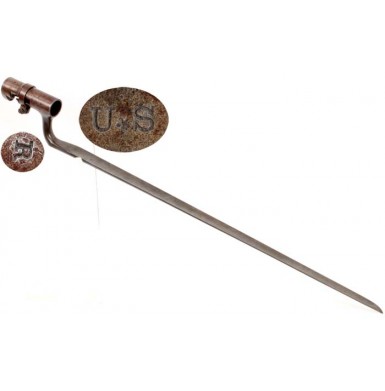 US M-1855 Socket Bayonet by Amoskeag

During the American Civil War, well over 1,000,000 US Model 1855 .58 Caliber Socket Bayonets were produced by the Springfield Armory and some two-dozen contractors. The large majority of these bayonets bear no distinguishing markings that allow today’s collectors to determine what company manufactured them. One of the rare exceptions are the bayonets that were produced by Collins & Company, which are marked on the socket with a small C&Co mark. The other notable exceptions are the .58 socket bayonets delivered by the Amoskeag Manufacturing Company of Manchester, NH. In 1862 Amoskeag Manufacturing Company received their first contract to deliver M-1861 Rifle Muskets to the US government. Due to a delay in the availability of gauges and a sample arm from Springfield Armory, Amoskeag was forced to share a sample musket that had been delivered to the firm of Lamson, Goodnow & Yale (LG&Y) of Windsor, VT. LG&Y had purchased a large amount of equipment and some gun parts from the bankrupt firm of Robbins & Lawrence who had produced Enfield pattern rifle muskets for the British government during the Crimean War. As a result, LG&Y wanted to produce guns that were more “Enfield” style than US M-1861 style. This meant that they were going to produce the US M-1861 Rifle Musket that had been developed by Samuel Colt as a sort of Springfield-Enfield hybrid. As Amoskeag had to share the LG&Y sample musket, and it was of the “Special Model” pattern, Amoskeag was destined to produce M-1861 Special Model rifle muskets as well. Amoskeag would proceed to deliver 27,001 of the M-1861 Special Model rifle muskets between 1863 and early 1865. All of these were complete stands of arms that included a M-1855 socket bayonet as well. Amoskeag marked the butt plate tangs of their muskets in a unique way, with a 5-pointed star between the letters “U” and “S”, and they used this same marking system on the ricassos of the bayonet that they delivered. The Amoskeag delivered US M-1855 socket bayonets are all crisply stamped U * S on the face of the blade, near the neck, making them one of few examples that can be identified as to maker. As no contracts have been uncovered that show Amoskeag sub-contracted their bayonet production, it is generally believed that they made them in house. In addition to the 27,001 muskets and bayonets delivered to the US Ordnance Department, Amoskeag sold an additional 1,837 socket bayonets to the Springfield Arsenal after the end of the war for $2,266.66 (or about $1.23 each). This suggests that only 28,838 US M-1855 socket bayonets were produced by Amoskeag, a very small number when compared to other contractors and the total overall production numbers. In fact, with a total of more than 1 million of the bayonets being produced by all sources, Amoskeag bayonets represent about 2% of the total production. This makes the Amoskeag produced M-1855 socket bayonets very scarce today.

This Amoskeag Manufacturing Company US M-1855 Socket Bayonet is in VERY FINE, untouched condition. The bayonet has a beautiful, uncleaned brown patina with some plum tones over almost its entire surface. The bayonet is mostly smooth, with only a couple of small areas of lightly scattered pinpricking. The ricasso is clearly and deeply stamped U * S, and the sum inspection initial R is deeply struck sideways into the right side of the socket, forward of the mortise cut. The blade is full length and the original locking ring and tension screw are in place on the socket. The locking ring functions smoothly and correctly. The socket shows some small patches of light surface oxidation and minor roughness that could probably be easily cleaned.

Overall this is a really crisp and well marked example of a very scarce US M-1855 socket bayonet produced by the Amoskeag Manufacturing Company. Examples of their bayonets rarely appear for sale and command large premiums over the more common variants with no maker marks. If you have an Amoskeag contract M-1861 Special Model Rifle Musket, this is a must have accessory for your gun. If you are a bayonet collector, this is a hard example to find and great opportunity to add one to your collection. As these bayonets are about 50 times rarer than the standard examples with no maker marks, they should be worth 50 times as much; but this one is only about twice as expensive as a similar M-1855 socket bayonet. Based upon what I have seen charged for these scarce bayonets in the past, that is a pretty good deal!