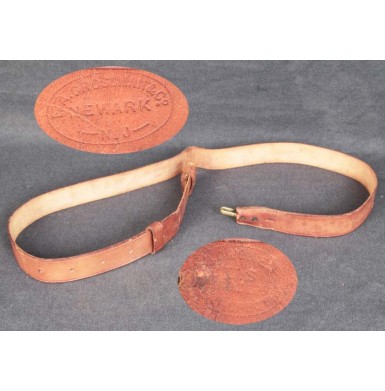 This is a great example of a US contractor made sling for use with US Civil War era rifle muskets. This is a Pattern 1857 musket sling which was originally designated for issue with the US M-1855 rifle musket, and subsequently saw use with the M-1861, M-1863 and M-1864 rifle muskets. The Pattern 1857 sling replaced the earlier Pattern 1839 sling. Both slings incorporated a standing leather loop through which the sling passed at the triggerguard end of the musket. The other end had a flat brass adjustment hook, which was retained by a pair of brass brads and a sewn flap at the end of the sling. The hook engaged one of several holes along the length of the sling, which allowed the length to be adjusted. A slinging leather loop allowed the looped section of the sling to be kept tight and out of the way. The primary differences between the two patterns of slings were that the length of the Pattern 1857 sling was increased 2” (from 44” to 46”) and the folded leather end with the brass hook was tapered, rather than squared off. In both cases, the regulations called for the slings to be manufactured either of “fair” leather or “stained leather”. Fair leather was high grade, chestnut oak tanned leather that was free of blemishes. The leather was not dyed, but was only oiled, leaving it yellowish-tan color, which modern collectors often refer to as “russet”, even though that is not really a correct description. The “stained” leather was slightly lower quality and had some visible blemishes. The leather was “stained” to even out the appearance of the leather. Over the years of service, wear and the accumulation of oils and dirt, many “Fair” leather slings are found a dark brown or dark tan color today and are often thought to have faded from an even darker color. This is not the case, as when these slings were new they were a very light, yellowish-tan color. During the course of the American Civil War, lower quality hemlock tanned leather was often substituted for “fair” leather, and the accoutrements produced of chestnut tanned leather tend to have a dark chocolate brown color today. (Thank you to David Jarnagin for sharing his research into 19th century leather & tanning techniques.)

This US Pattern 1857 Rifle Musket Sling is in VERY FINE condition and is well marked. The sling was manufactured by E.A. Crosman & Co of Newark, NJ. A crisp and clear oval makers cartouche reads in three lines: E. A. CROSSMAN & Co./ NEWARK / “ N . J “. E.A. Crossman was listed in the Newark directories as a harness maker from 1861-1865, and listed at 164 Walnut Street (1861-62), 13 Franklin Street (1863-64), and 104 Railroad Ave (1865). The firm received US Ordnance Department contracts in 1864 and 1865 for 15,000 sets of infantry accouterments, 5,000 saber belts & belt plates, 6,100 carbine slings, 2,500 carbine cartridge boxes, as well as orders for halter and stirrup straps. The musket slings were likely a part of the “infantry accouterments’ order, which would have also included cartridge boxes & slings, cap pouches, waist belts and bayonet scabbards. The firm remained in business after the war and changed its name to E.A. Crossman Jr. in 1868. As late as 1874 they were still producing harnesses and employed 15 people. The directory noted that they produced “harnesses exclusively, and a specialty is made of the finer grades, comprising road, coach and track harnesses”.The goods are mainly sold in the eastern markets.” The sling also bears an oval US Ordnance Department inspectors cartouche that reads in four lines: W.H. JONES / U.S. / ORD DEPT /SUB INSPECTOR. This mark is not as crisp as the maker’s mark, but and the left side is difficult to read due to crazing and bending of the leather around hook adjustment hole that kept the sling taught and out of the way when not in use. The sling is full length at 46” and retains both the original standing loop and the adjustable sliding loop. Both loops are in very good condition and remain both strong and supple with all of their original stitching present. The sling itself is of “fair” leather and retains a light tan with a hint of yellow color. The sling is strong and supple, with only a couple of areas of noticeable wear or crazing, mostly in the areas where the sling bent around the sling swivels that it was attached to. The sling does show some scattered light staining from oil and dirt, but nothing significant. The sling is free of any rips, tears, gouges or repairs and all of the original stitching remains intact, tight and secure. The original flat brass wire adjustment hook has an untouched mustard patina and both of the original brass brads are in place, with some lovely green verdigris around them. The only areas that show any potential weakness are the bends where the sling was previously mounted on a rifle. However, with careful handling there is no reason the sling could not be installed on rifle musket to enhance the display of the weapon.

Overall, this is a really nice example of a Civil War musket sling in much better condition than they are normally encountered. The sling displays well with an excellent maker’s mark and mostly legible inspector’s mark. It would be a great addition to a high grade US rifle musket or for display on its own. Rarely does one find a sling for sale in this solid, but actually used condition, with most slings being found in either very worn or (occasionally) unissued conditions. Its been a long time since I’ve seen a sling like this available loose from a gun, and I’m sure you will be glad to add it to the display of your rifle musket.