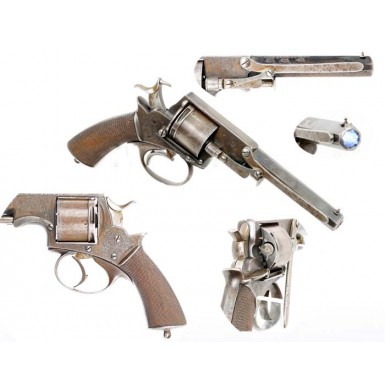 Offered here is what at first glance appears to be a very scarce Tranter Model 1863 .450 Center Fire Revolver. The gun has the usual earmarks of such pistols with the specialized compound ejector system on the right-hand side and a 6” barrel, rather than the 6 ““ barrel that was standard on the rimfire version. However, the gun is completely unmarked, with the exception of Birmingham commercial proofs on the upper left barrel flat and between the cylinder chambers, and the number 1945.2 stamped on the interior of the ejector rod operating lever. Under close scrutiny, other small differences quickly become apparent. The Tranter revolver has a 6-shot cylinder and the centerfire variant used a frame mounted firing pin. Additionally, the Tranter version had a loading gate that rotated to right hand side. This example has a 5-shot cylinder, a conventional firing pin on the face of the hammer and a loading gate that rotates to the rear, with a long spring under it that is similar to that found on some of the Tranter “House Defence” pistols. Other small differences between the Tranter revolver and this pistol include a two-piece, rather than the usual Tranter one-piece grip, a hammer screw that enters from the left, rather than the right side of the frame, and a slightly shorter than usual spur at the rear of the trigger to trip the sear. It is generally believed that Tranter relied upon many smaller Birmingham makers to produce some of his smaller frame revolvers under contract for him, in an attempt to keep costs down and to increase production capacity. This revolver, may well be an example of such Tranter sub-contracting, or may simply be a direct patent infringement that would rely upon the instantly recognizable Tranter features to create a gun that appeared to be a Tranter. No matter who the maker was, they executed the Tranter design with a high level of competency, fit and finish and produced a very high quality double-action centerfire revolver.

This Tranter Model 1863 Type Revolver is in NEAR FINE condition overall. The gun retains about 10%-15% of its original blued finish, mostly on the barrel with some blue in the protected areas of the frame. The balance of the gun has a smooth brownish gray patina with some darker age discoloration and minor surface oxidation. The revolver is free of any pitting, but does show some very lightly scattered pinpricking and minor surface oxidation. The frame of the revolver is finely engraved with tight floral scrolls, with the first 1 ““ of each of the upper angled barrel flats engraved en-suite. The same patters are used very delicately on the leading edge of the cylinder between each chamber. The front edge of the cylinder is engraved with a delicate boarder line pattern that is duplicated around the muzzle and the outer edge of the topstrap, terminating in more floral splays at each end and a shell pattern at the rear, near the hammer. The quality of the engraving in no way suggests “cheap knockoff” and is all expertly applied. Delicate floral scrolls enhance the backstrap as well. As noted, other than the Birmingham proof marks and the number on the reverse of the ejector system handle, there are no other markings present on the gun. The center of the topstrap was obviously left unadorned to allow the application of a retailer’s name. The revolver has a 6” octagonal barrel with a narrow top flat that gives the barrel a slightly peaked appearance. The gun is approximately 10 ““ in overall length, and has a solid frame with a reward hinged loading gate on the right side. The right side also has the Tranter M-1863 compound ejector system. The barrel is rifled with eight deep, narrow grooves and measures .471” groove-to-groove at the muzzle and .430” land-to-land. The five-shot cylinder rotates clockwise, and the chamber mouths measure .448”, with the rear of the chambers measuring .454”. The chambers are not recessed to accept a cartridge rim. The double action mechanism functions flawlessly as does single action operation, and the revolver times, indexes and locks up exactly as it should. The compound ejector system and loading gate work appropriately as well. The bore of the revolver is in VERY GOOD condition, and remains mostly bright with lightly scattered pitting along its length and a few small patches of more moderate pitting. The original peppercorn front sight is dovetailed in place near the muzzle of the revolver and the original small lanyard ring is present in the buttcap. The two-piece checkered walnut grips are secured by a single screw in the bottom of each grip, which passes through the buttcap of the revolver, and by a tab at their top edge that engages the frame. The grips are slightly loose due to wear in the screw holes, preventing the screws from applying enough torque to properly secure the panels. The grips are in about VERY GOOD+ condition and are solid and complete with no breaks, chips, cracks or repairs. They do show some light wear and some smoothing to the checkering as well as some minor bumps and dings from handling and use. Otherwise they remain in very nice condition with no indication of sanding.

Overall this is a crisp condition example of a Birmingham trade made Tranter Model 1863 .450 CF revolver. The gun shows some real-world use, but no abuse and remains 100% complete, correct and fully functional. It is a very nice example of a pattern of English revolver that is rarely found for sale in America and when it is, the gun is the .442 RF version. These are nearly never found in .450 CF. This is a great opportunity to own a very important transitional revolver design that helped to forge the path from percussion to cartridge revolvers in Great Britain.