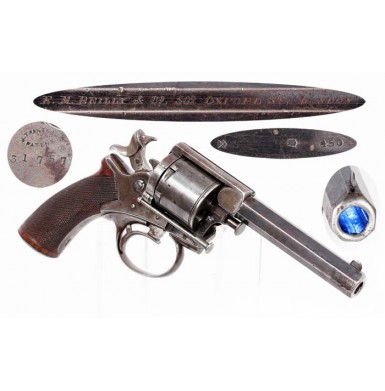 This is a VERY FINE example of a Tranter M-1868 Double Action Revolver. The M-1868 was one of first mass produced English cartridge revolvers, and was patented in early 1868 by the famous Birmingham gun designer and maker, William Tranter. William Tranter was born in 1816 and died in 1890. He appears to have entered the gun trade as an apprentice to Robert Dugard, at 29 “ Whittall Street, sometime during the 1830s. In 1840, Tranter took over Dugard’s business and he remained at the Whittall Street address until 1849, when he moved to 13 St. Mary’s Row. He remained at that location for the majority of his career, working there from 1849 until 1874. From 1854-1860 he also operated a second location (possibly a retail location versus a manufacturing location) at 50 Loveday Street. In 1874 he moved his business to 31 Lichfield Road, where he remained until his left the trade in 1883. Tranter worked closely with John & Isaac Hollis during the second half of the 1840s, as well as with Isaac Sheath (who later formed the partnership of Hollis & Sheath). In 1854, he became a founding member of the newly formed Birmingham Small Arms Trade (BSAT) association, and was also a founding partner in the Birmingham Small Arms Company (BSA) in 1861. During his career, Tranter received numerous English patents for innovations and improvements in the field of firearms. Although the revolver was certainly not the focus of his business during its early days, many of his patents obtained to innovations in revolver designs. As a result, revolvers made up much of his manufacturing, sales and design efforts from the early 1850s through the end of his career. One of Tranter’s most important designs was that of a “double trigger” percussion revolver, which was protected in 1853 under British Patent #212/1853. Additional patents such as #2067/1862 and #1862/1863 covered additional refinements to both the lockwork and mechanisms of revolvers, as well as loading gates for cartridge revolvers. Additional improvements to cartridge revolver designs were covered by his patents #1889/1865, #2113/1866 and #285/1868. #258 of 1868 was a truly innovative improvement that utilized a hammer that struck a firing pin in the frame of the revolver, instead of a hammer with a permanently attached firing pin. This invention anticipated a system (in combination with a transfer bar safety) that would be standard in most revolvers produced from the mid-20th century and onward. Tranter’s patent #3622/1868 covered two types of cartridge extractors, including the one utilized in his early production M-1868 revolvers, where the extractor rod lay against the frame of the revolver when not in use. Tranter was a believer in the strength of a solid frame revolver, with the frame and barrel made from a single forging. Robert Adams had patented the design, and Tranter licensed the rights to manufacture one-piece revolver forgings from Adams, paying patent royalties to Adams until the patent expired. Tranter also licensed his designs, allowing other manufactures to utilize his patents in return for the payment of patent royalties.

As successful as Tranter’s “double trigger” percussion revolvers were, especially the 3rd Model revolvers, his M-1868 cartridge revolvers overshadowed that success; both in sales and in licensing of the design ot other makers. The pistols were offered in both rimfire and centerfire variants, with calibers ranging from .32 to .50. The barrel lengths of the revolvers varied with caliber and frame size, and the revolvers were produced with both 5 and 6 shot cylinders. The early pattern M-1868 revolvers utilized a pivoting ejector rod that was stored in an exposed position under the cylinder, along the right side of the frame. The later production M-1868 revolvers had an ejector rod that was stored in the center of the cylinder arbor pin. The action of the M-1868 was based on Tranter’s “Fourth Model” self-cocking percussion lockwork, and employed a single trigger that actuated the rotation of the cylinder and the cocking of the hammer. A spur on the rear of the trigger engaged the sear inside the frame of the pistol, which released the hammer to fire the revolver. The pistols could also be used in the traditional single-action mode by thumb cocking the hammer. Loading and unloading was accomplished via a hinged loading gate on the right side of the frame. In typical Tranter style, the guns had blued steel frames that were forged from a single piece of metal, based upon the patented design of Robert Adams. The cylinders of the revolvers were often case hardened in mottled colors and the one-piece walnut grips were typically finely checkered and varnished.

This Tranter M-1868 Double Action Revolver is in VERY FINE condition. This revolver is sometimes referred to as the “Army Model” because it is chambered for the English .450 Center Fire cartridge. This cartridge is most often referred to as the “.450 Adams”, and was the first centerfire cartridge adopted for use by the British Military. It remained the standard British service revolver cartridge until 1880, when it was replaced by the .476 Enfield cartridge. The .450 was known by a variety of names including “.450 Center Fire”, “.450 Colt”, “.450 Short” and “.450 Revolver”. The cartridge was typically loaded with a 226-grain lead bullet that traveled at about 700 fps with about 245 ft/lbs of muzzle energy. The cartridge ballistics were quite similar to the .44 Smith & Wesson Russian. The pistol has a nominal 5” octagon barrel, and is about 10 ““ in overall length, and has a 6 shot cylinder. The top barrel flat is engraved with the retailer mark E.M. REILLY & Co, 502 OXFORD St, LONDON. Edward M. Reilly was born in 1816, and learned his trade from his father, who was a London jeweler and gunmaker. Together they operated at 502 Oxford Street from 1848 to 1861, when the firm became E.M. Reilly & Co. The business remained at that address and under that name until 1882. Reilly retailed gums from other makers as well as manufacturing his own. During the early 1870s he maintained a second location at 315 Oxford Street as well. The firm remained in business, at a variety of locations through 1917, when the business was absorbed by Charles Riggs & Co.

The pistol retains about 70%+ original bright blue on the barrel and about 10%+ on frame, mixed with smooth grayish-brown patina. The cylinder retains about 30%+ original mottled case coloring, much of which has faded to a silvery gray patina. The metal of the pistol is smooth and almost completely pit free, with only a couple of small areas of the pinpricking and very light pitting present, near the muzzle on the right side of the barrel. The bore of the revolver is in VERY FINE+ condition as well. It remains mostly bright with crisp 5-groove rifling, and shows only some very lightly scattered pitting and light frosting it the grooves. The action of the pistol is excellent and the gun functions flawlessly, with perfect indexing, timing and lock up. The pivoting ejector rod works smooth and flawlessly as well. The upper portion of the left side of the frame, forward of the cylinder is marked with the usual Tranter two line trademark: W TRANTER’s / PATENT with the serial number 31757 is under the trademark. The pistol is marked with the usual Birmingham commercial proof marks on the barrel and on the cylinder between the chambers. The barrel is also marked 450, indicating the caliber of the revolver. The rear face of the cylinder and the inside of the loading gate are marked with the assembly number 83. The one-piece checkered walnut grip is in NEAR EXCELLENT condition, with absolutely no chips, cracks, breaks or repairs. The grip retains about 80%+ of its original varnished finish and the checkering remains mostly crisp and sharp throughout. The grip shows only the most minor indication of lightly handling.

Overall this is a really wonderful example of a large frame Tranter M-1868 Revolver, in the desirable .450CF caliber. This will be a fantastic addition to any collection of early cartridge revolvers, of 19th century English handguns or of Tranter arms. The pistol is in great condition, is mechanically excellent and would likely be a nice a shooter as it would be a collectors piece. Either way, it will be a great addition to your collection of 19th century handguns.