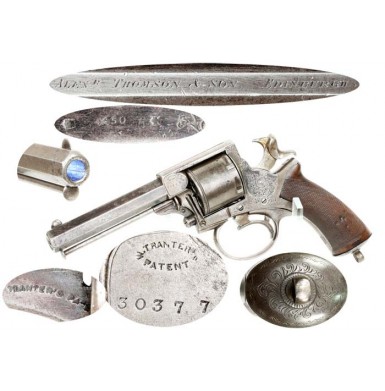 Offered here is a very scarce Tranter Model 1868 .450 Center Fire Revolver. Although these guns appear to have been made in greater numbers than their Model 1863 predecessors, and were certainly manufactured for a longer period of time, they appear to be equally rare in the market place. The revolver bears the usual TRANTER’s PATENT mark in two-line, arched cartouche on the upper left side of the frame, just behind the barrel, over the serial number 30377. This number places the gun very early in the production run of M-1868s that is generally believed to have commenced at about serial number 30,000 and continued through about the 60,000 range. It appears that all Tranter revolvers were numbered consecutively, without regard to model, thus during the early days of M-1868 production, when M-1863 revolvers were being produced as well, it would not be uncommon for consecutive numbers to be different models. The revolver is also marked TRANTER’s PATENT in a single-line arc on the left side of the cylinder arbor pin release. The matching assembly number 21 is found on the bottom of the barrel (concealed by the ejector rod) and on the rear face of the cylinder. The top flat of the asymmetrical octagonal barrel is marked ALEXR THOMSON & SON EDINBURGH. The firm of Alexander Thomson and Son was established by Alexander Thomson at 3 Drummond Street in Edinburgh in 1820. Thomson was a gunmaker and retailer. In 1833 Thomson moved to 16 Union Place and in 1869 the firm became Alexander Thomson & Son, moving to new premises at 95 Princes Street, where they remained through 1875, relocating to 3 Hanover Street in 1876 and remaining there through the end of the firm’s existence circa 1878-1879. This time line correlates with the very low serial number (for this model) on the gun, indicating it was certainly produced circa 1868-69. The only other markings are the caliber mark 450 on the upper left angled flat of the barrel, along with Birmingham commercial proof marks, which are also found on the cylinder, between the chambers.

This Tranter Model 1868 Revolver is in VERY GOOD+ to NEAR FINE condition overall. The gun retains about 10%-15% of its original blued finish, mostly on the barrel with some blue in the protected areas of the frame. The balance of the gun has a smooth brownish gray patina with some darker age discoloration and minor surface oxidation. The revolver is free of any serious pitting, but does show some very scattered pinpricking and minor surface oxidation, most rom. The frame of the revolver is finely engraved with tight floral scrolls, both in front and behind the cylinder. The first 1” of each of the upper angled barrel flats engraved as well with a floral splay and shell motif. The front edge of the cylinder is engraved with a delicate boarder line pattern and a similar, but larger boarder line is engraved around the muzzle. The quality of the engraving is quite fine. Delicate floral scrolls also enhance the triggerguard, as well as the buttcap. While most Tranter revolvers prior to this model had flat topstraps, this one has a slightly convex topstrap with a sighting groove machined in it, giving the gun a much more “modern” appearance when compared to the percussion and early cartridge models. The revolver has a 5 1/8” octagonal barrel with a narrow top flat that gives the barrel a slightly peaked appearance. The gun is approximately 10 1/8” in overall length, and has a solid frame with a hinged loading gate on the right side of the frame that opens down and to the right. The barrel is rifled with five wide grooves and measures .440” groove-to-groove at the muzzle and .430” land-to-groove. The six-shot cylinder rotates clockwise, and the chamber mouths measure .446”, with the rear of the chambers measuring .484”. The chambers are not recessed to accept a cartridge rim. The double action mechanism functions flawlessly as does single action operation, and the revolver times, indexes and locks up exactly as it should. The under-barrel ejector system and loading gate both function appropriately as well. The bore of the revolver is in VERY GOOD+ to NEAR FINE condition, and remains mostly bright with some lightly scattered pitting along its length. The original round blade front sight is in place on top of the barrel, near the muzzle of the revolver and the original small lanyard ring is present in the buttcap. The one-piece checkered walnut grip is secured by two screws, one in the upper tang and one in the bottom of the gripstrap. The grip is in about VERY GOOD condition and remains solid and complete with no breaks, chips, cracks or repairs. The grip does show some light to moderate wear and some smoothing to the checkering, as well as some minor bumps and dings from handling and use. There is a small cluster of dings in the left-hand side of the grip. Otherwise the remains in very nice condition with no indication of sanding.

Overall this is a crisp condition example of a fairly uncommon Tranter Model 1868 .450 CF revolver. The gun shows some real-world use, but no abuse and remains 100% complete, correct and fully functional. It is a very nice example of a pattern of English revolver that is rarely found for sale in America. This is a great opportunity to own a very important transitional revolver design that helped to forge the path from percussion to cartridge revolvers in Great Britain.