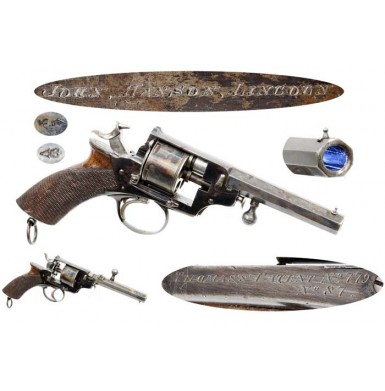 With the introduction of successful self-contained metallic cartridges in the mid-19th century, the race began to “build the better mouse trap” for repeating handguns. Two basic types of metallic cartridge revolvers came to dominate the basic designs of the period. The first was the solid frame revolver that was loaded and unloaded one cartridge at a time via a gate on the side of the frame, typified by the Colt Single Action Army in America and early Adams and Tranter revolvers in Great Britain. The other primary design was a “break open” action that allowed for simultaneous extraction of spent cartridges and more rapid reloading. In America, the Smith & Wesson design predominated, while in Great Britain it was the Webley that best represented this type of revolver. While the top break system certainly had advantages in loading and unloading, it had limitations as well. The system was not well adapted to long cartridges or cartridges that had small rims. Longer cartridges meant a longer extraction system which was weaker and less reliable and small case rims had the potential to slip through the extractor star, fall back into the chamber and the revolver useless until the case could be punched out of the chamber. These two failings were the reason that the Smith & Wesson Schofield was not chambered for the standard service revolver ammunition, the .45 Colt cartridge. It was too long with too small a rim to function reliably with the extractor system. In an attempt to circumvent the design limitations of the break open action design, several competing “simultaneous’ extraction systems were patented around the world. The best known in the United States was that used by Merwin, Hulbert & Company. In Europe, the most successful design was that of Charles François Galand, and in Great Britain it was the design of John Thomas. All three systems used a similar concept, in that opening the action allowed the barrel and cylinder to be drawn forward on the cylinder arbor pin, which by a variety of methods removed the spent cartridges from the chambers and allowed unfired cartridges to remain in the action of the revolver. While the Merwin, Hulbert & Company design is well known to collectors, and most have at least heard of the French Galand patent design, the Thomas Patent Revolver remains a relatively obscure and unknown design to most collectors.

Offered here is a VERY FINE+ condition example of a scarce and early production Thomas Patent Revolver. The gun is one of the large-bore, .450 CF handguns, with a five-shot cylinder and a 5 ““ octagonal barrel. The revolver is clearly marked in two lines on the lower left side of the frame: THOMAS’ PATENT No 799 over No 87. The “799” refers to the actual patent number assigned to Thomas in 1869, and “87” is the serial number. The topstrap is engraved with the retailer mark: JOHN HANSON, LINCOLN. John Hanson was a gunmaker and retailer located at 244 High Street in Lincoln (Lincolnshire) from about 1860 to 1883. The revolver bears the usual London commercial proof marks of the period, a (CROWN) / GP and a (CROWN) / V, and they are found between the cylinder chambers and on the bottom of the barrel. This indicates that the revolver originated in the Tipping & Lawden London manufactory. All of the markings remain crisp, sharp and very legible.

As previously noted, the revolver is in VERY FINE+ condition and retains much of its original finish. The revolver has a color case hardened cylinder and barrel, with a blued frame. The barrel retains about 65%+ original vivid case coloring with some fading, dulling and wear. The largest area of loss is along the left side of the barrel, near the frame juncture, where some small scratches and scuffs are present as well. It is possible that some oxidation occurred here and was subsequently cleaned off. The areas of the barrel where the color had faded or worn have a dull pewter gray patina. There is some lightly scattered oxidized discoloration and staining flecked along the barrel, but it is minimal and blends well with the mottled coloring. The cylinder retains about 80%+ vivid case coloring and is very striking. There is some lightly oxidized discoloration and staining present on the cylinder as well, mostly on the front and rear faces. The frame retains about 35% of its original bright blued finish with the majority of the fading, flaking and loss on the left side of the frame. The areas of fading and loss have a similar dull pewter gray patina as found on the barrel on the forward portion and a smooth plum-brown patina at the rear of the frame. Again, small areas of minor oxidized discoloration and staining are present on the frame, as well as some flecks of minor surface roughness and very minor pinpricking. The blued triggerguard and buttcap retain only traces of original blue, and show a smooth plum-brown patina as well. The hammer is finished it the white and shows flecks of oxidized discoloration on its surfaces. The bore of the revolver is in EXCELLENT condition and remains bright and shiny, with only some minor frosting in the grooves. The bore is rifled with four broad grooves and four narrow lands, that all remain quite crisp and sharp. The revolver retains its original lanyard ring in the butt and the original front sight in the dove tail on the top of the barrel near the muzzle. The revolver is mechanically EXCELLENT and functions perfectly in every way. The double action mechanism functions flawlessly and the revolver times, indexes and locks up exactly as it should. The unique hammer safety mechanism is fully functional as well. The barrel locks securely into place as it should and when the frame released is pressed, the barrel can be rotated and pulled forward to open the action exactly as it was designed to nearly 150 years ago. This entire operation still works smoothly and locks up tight as a drum. The loading gate operates smoothly and correctly as well. The checkered one-piece walnut grip remains in about FINE condition as well. The grip is solid and complete and free of any breaks, cracks or repairs. The grip shows some scattered bumps, dings and bruises from handling and use, but no abuse, and the majority of the checkering remains crisp and sharp.

Overall this is a really wonderful example of a very scarce Thomas’ Patent Revolver that is 100% complete, correct and original in every way. The gun retains most of its original finish and the color case hardened barrel and cylinder are very striking in appearance. The revolver and its unique mechanism operate flawlessly, and the gun remains in crisp condition throughout. This is a very interesting gun and wonderful example of a scarce variant in the quest in improved system for simultaneous extraction. While never as successful as the competing designs of the time, the fact that similar systems were developed and marketed in America and on the Continent during the same period speaks to the practicality of the system. This would be a great addition to any advanced collection of early cartridge revolvers, English cartridge revolvers or any display that follows the mechanical advances in cartridge revolver design. From a systems standpoint, a display with a Merwin, Hulbert & Co revolver a Galand revolver and a Thomas’ Patent revolver would be very interesting and educational. These Thomas’ Patent handguns rarely come up for sale, and when they do they often have condition issues or mechanical issues with the hammer safety. This gun is 100% in every way and will be a great addition to your collection of 19th century cartridge handguns.