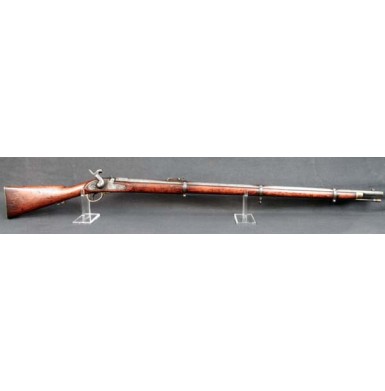 This is a great example of a percussion long arm that is rarely encountered in the United States. It is a Spanish Modelo 1857 Rifle Musket. In the 1850’s the Spanish adopted a series of percussion long arms that were nearly exact copies of the English Pattern 1853 Enfield family of arms. While all Spanish percussion military arms are scarce, a number of the M-1857 rifles (two band length) exist today “ most of which have a very strong association with Confederate importation and purchase. The longer, “3-band” rifle muskets are extremely scarce. In fact, this is only the 2nd one I have ever had the opportunity to own, and I am always searching for unique European arms with possible Civil War association. We had long known that the Birmingham Small Arms Trade in England helped produce at least some of the Spanish contract bayonets, as a handful of the M-1857 socket bayonet are known with BSAT marks on their blades. This contract produced Spanish M-1857 Rifle Musket takes that association a step farther, in that it is a pure Spanish pattern gun, produced by the famous Birmingham gunmaker Thomas Turner and retailed by Glukman. As is so often the case with Birmingham produced arms of the era, the gun is profusely marked, and shows the involvement of several contractors. The toe of the buttstock bears the mark T TURNER and this same mark appears on the bottom of the barrel and inside the lock, above the mainspring. Thomas Turner was one of the most successful and powerful gunmakers in Birmingham during the 19th Century and operated at 8 Fisher Street from 1838 until 1890, when he died. The inside of the barrel channel is marked with the name S SWINFEN. Swinfen was a Birmingham gun stocker who went into business about the same time as Turner and operated just a few doors down at 2 “ Fisher Street. The inside of the lock also bears the initials RW, possibly the lock maker or the setter up who assembled the gun. The bottom of the barrel also has a number of initials, numbers and various assembly and inspection marks. The 39 ““ barrel has a 2 ““ octagonal breech section that is typical of Spanish rifle muskets of the period (as well as some Confederate imported guns with the 40” long, “Diamond C” barrels), and bears the usual Birmingham commercial proofs, along with the dual gauge marks 26, indicating .57 caliber. The breech area also contains a small BSAT mark and a Circle-Z Spanish proof mark, and the opposite side of the breech is serial numbered the way most Spanish military percussion arms of the mid-19th Century are. In this case, the serial number appears to be 627. The top of the breech and the lock are both marked with what I believe is a retailers cartouche. The mark reads in three lines (with the top and bottom lines arced): GLUKMAN / 1862 / BIRMINGHAM. I could find no reference to a Glukman (or C Lukman if that is what it says) in any of my extensive references to the Birmingham gun trade, and have to believe that he was the retailer who sold the gun or acquired the contract to provide the guns that this musket was a part of. The lock is additionally marked with a small (CROWN) / J” forward of the hammer, with the second letter not entirely legible, although it appears to be a T. A small Circle L mark appears on the buttplate tang, the triggerguard and the front of the brass nose cap of the musket. The meaning of the mark is completely unknown to me, although an 1862 Tower, BSAT marked P-1853 Enfield recently appeared on the market with this same mark in the stock, just in front of the butt plate tang. Like the M-1857 Rifle, this rifle musket has the distinguishing characteristics of a spanner nut to retain the barrel band screws, a brass wrapped head on the ramrod and sling swivels at the rear of the triggerguard tang, instead of on the triggerguard bow. The rifle musket also has a distinctive rear site that is very similar in appearance to the site on the rifle, but that is soldered directly to the barrel and not secured by a band around the barrel.

The gun is in about VERY GOOD condition overall, although it has seen significant service and as such shows some scattered light pitting over most of the iron components. The breech area shows the most pitting, and this makes the cartouche of the retailer somewhat difficult to read. The lock plate shows similar pitting forward of the hammer. All of this wear is the result of the caustic cap flash from the caustic mercury based percussion caps used to ignite the powder charge in the barrel. The pitting thins out and becomes more scattered the further you get from the breech. The gun has a medium dove gray color to most of the iron furniture and the barrel, with scattered patches of age discoloration and minor oxidation. The brass furniture has all been lightly cleaned and has a pleasing brass tone that is starting to mellow just a little bit. The lock functions crisply and correctly on all positions and remains mechanically excellent. The musket retains the original rear site, as well as the original and correct ramrod, which is full length and retains excellent threads on its end. The original upper sling swivel is in place, but the swivel and screw mounted on the triggerguard tang are more modern replacements. The hammer screw also appears to be a modern replacement, as is the cone (nipple). The bore rates about GOOD condition overall, with strong rifling present, and light to moderate pitting along its entire length. A good scrubbing might improve the bore somewhat, but I can’t guarantee that it will. The stock is in about GOOD+, and shows the usual assortment of bumps, dings, gouges and wear marks that are associated with a 150 year old military musket. The stock does retain decent edges and most of the stock marks are clear, other than a few marks in the wood, just forward of the buttplate tang “ the very place where Confederate import marks can sometimes be found. There are clearly the remnants of marks there, but they are no longer legible. There is a small chip of wood that has been repaired on the stock, behind the breech and to the left of the barrel tang. The chip was likely the result of improper barrel removal, and the original piece of wood has been re-glued into place. The repair does not materially detract from the display of the musket and is visible in the accompanying photographs. Otherwise the stock appears to structurally sound and free of any other repairs or damage.

Overall this is an attractive and relatively complete example of a percussion rifle musket that is rarely encountered in America. It is difficult to know for sure how this musket arrived here, and whether or not it has a direct Civil War link, like the M-1857 Spanish Short Rifle does. Since this gun was produced and retailed in Birmingham, it is not unlikely that it may have been part of a Spanish contract production overrun or even a cancelled contract, which was subsequently sold to arms purchasers for the North or South. It is highly unlikely that either side would have turned down a small order of percussion rifle muskets that were for all practical purposes “Enfield’s” when they were offered for sale. One way or the other, this is a scarce arm that would be a great addition to any advanced collection of 19th Century percussion military muskets, or to a collection of arms that concentrates on those guns made in Birmingham. This is one of those neat items that you simply don’t have to worry about all of your collecting buddies saying, “I’ve got one of those” when you show it to them!