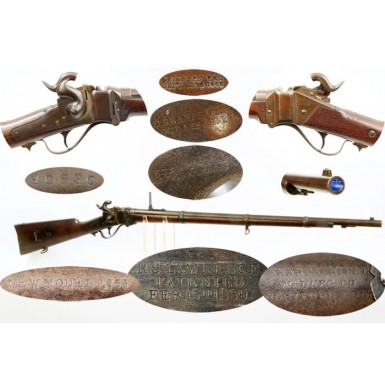 Offered here is a VERY GOOD+ to NEAR FINE condition example of a Mitchell US Navy Contract Sharps New Model 1859 Rifle. The gun is one of the fairly scarce NM-1859 Rifles with a saber bayonet lug under the barrel, shows no inspection markings, and which falls in the correct serial number range for the Mitchell Contract arms. The rifle has the serial number 40630 clearly stamped on the tang, with the matching serial number 40630 under the barrel. The rifle also bears the rack number 56 on top of the stock comb, further indication of military use and issue. The barrel is marked SHARPS RIFLE / MANFG. CO. / HARTFORD, CONN in three lines, forward of the rear sight and NEW MODEL 1859 between the rear sight and the receiver. The Lawrence Patent sight base is marked in three lines as well: R.S. LAWRENCE / PATENTED / FEB 15TH 1859. The lock plate is marked in the center, behind the hammer, in two horizontal lines: C SHARPS’ PAT. / OCT. 5TH 1852 and is also marked near the top of the lock plate, behind the hammer: R.S. LAWRENCE PAT. / APRIL 12TH 1859. The left side of the breechblock is marked in two horizontal lines: C SHARPS PAT. / SEPT. 12TH 1848. The interior rear of the breechblock is clearly stamped R.S. LAWRENCE / PATENT / DEC. 20TH 1859 in three lines on the left side and H. CONANT / PATENT / APR. 1ST 1856 in three lines on the right side. As mentioned the rifle is in about VERY GOOD+ to NEAR FINE condition and retains some strong traces of original finish, combined with a really lovely and completely untouched plum-brown patina. The receiver, lock plate and hammer all have a deep, unmolested plum-brown patina, retain some trace hints of case coloring showing some mottled browns and blue flecks within the patina. The interior of the receiver shows nicely faded and dulled case coloring. The iron patch box retains a similar deep plum patina as well. The breechblock lever and trigger plate show a similar, slightly mottled plum brown coloration, with an even richer tobacco tone. The case hardened iron buttplate matches the balance of the furniture as well, as do the barrel bands and nose cap. The barrel retains some traces of the original factory blued finish on its surface, shown as flecks within the deep plum patina. The underside of the barrel, protected by the forend retains a strong amount of the original blue, maybe as much as 70% of the blue in the area that was protected. The metal of the rifle is free of any significant pitting, but does show some very lightly scattered flecks of minor surface oxidation and some lightly scattered areas of pinpricking, along with some very lightly scattered pitting on the receiver. The rifle has a very FINE bore, that remains nearly mirror bright and retains extremely crisp and sharp rifling. There is no real pitting to speak of visible in the bore, although there appears to be some minor frosting and possibly some scattered pinpricking in the grooves. A good scrubbing might bring the bore up to about mint condition. The action of the rifle works perfectly. Both the hammer and trigger system and the breechblock and lever work exactly as they should. The breech lever lock is also in place and fully functional. The Lawrence patent pellet primer system appears to be 100% complete and fully functional as well. This is nice, as the pellet priming system is often missing parts and completely non-functional, especially on the earlier production New Model 1859 rifles and carbines. The rifle retains the original long-range rear sight, as well as the original front sight and the previously mentioned saber bayonet lug. Both of the original sling swivels are also present on the rifle. The rifle has a FINE to VERY FINE condition stock and forend. Both pieces of wood are solid and complete without any breaks, cracks or repairs. Both are very crisp with very nice edges and no sign of ever having been sanded. Both piece of wood do show some scattered bumps, dings and surface mars from handling, storage and use, but show no signs of abuse or significant damage, other than a small chip forward of the rear swivel in the stock toe. The top of the comb, forward of the buttplate tang is stamped with a rack number which appears to read 56, no doubt the rack number or position the rifle held on the Civil War era US warship that the rifle was issued to.

Overall this is a really attractive and quite scarce Mitchell Contract Sharps New Model 1859 US Naval Rifle. The rifle is 100% complete, correct and un-messed with a really gorgeous and completely untouched patina. The gun remains very crisp and has a really wonderful look to it, giving it lots of eye appeal. The rifle is mechanically excellent with a fine stock and bore and retains strong legible markings throughout. These rifles are very scarce and with only 1,500 acquired are very difficult to find for sale. This rifle has survived in very nice, complete condition and would a wonderful addition to any collection of Sharps firearms or a US Navy small arms collection. The possibility that this rifle could well have been onboard the Kearsarge when she sank the Alabama only makes you wish that this rifle could talk and tell you its tales of adventure upon the high seas!