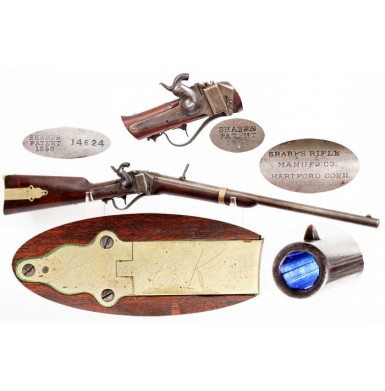 This is a FINE condition example of the Sharps Model 1853 Slanting Breech Carbine. About 10,500 of the carbines were produced between 1854 and 1857. The Sharps family of breech loading carbines is probably the most famous and recognizable breech-loading percussion arms to be developed during the American Civil War era. The “Sharps’ was the invention of Christian Sharps who was born in New Jersey sometime in 1811. In 1830 Christian went to work at the famous US Armory at Harpers Ferry, under the direction of firearms inventor and interchangeable parts pioneer John Hall. Sharps worked at Harpers Ferry for over a decade, learning the arms making trade, as well as the early concepts of assembly line production. In 1848 Sharps received his first patent for a breech-loading carbine. A.S. Nippes of Mill Creek, PA produced the first Sharps patent firearms in 1849 and 1850. By 1851, Sharps formed the Sharps Rifle Manufacturing Company in Hartford, CT. As the company was not yet ready to produce arms, Sharps entered into an agreement with Robbins & Lawrence of Windsor, VT to manufacture arms for him. By 1852 RS Lawrence (formerly of Robbins & Lawrence) moved to Hartford and became the master armorer of the new Sharps Rifle Manufacturing Company. The transition to the production of guns at the Sharps Rifle Manufacturing Company was rather slow, and many of the Model 1853 carbines were produced by Robbins & Lawrence. The Sharps Rifle Manufacturing Company finally took over production in Hartford in October of 1856. Like most of the Sharps produced arms, the guns were serial numbered consecutively, with all models in production at that time within the same serial number series. Each model did not begin with serial number “1”, but instead received a number representing its place in the production of all Sharps firearms. This means that other models do appear within the serial number range of the M-1853 carbine, which is generally considered to be from about 9,000 to 19,000. The Sharps M-1853 Carbine was produced with a variety of sling bar and ring arrangements, and the sporting models were often produced without the sling bar system. All of the M-1853 “Slant Breech” carbines were .52 caliber, single-shot, percussion breechloading carbines. They had 21.5” round barrels, and the large majority of the production run was brass mounted. Sharps received only a very small US military contract for the M-1853 “Slanting Breech” Carbine, with some 250 guns being contracted for. These guns saw service with the 1st and 2nd US Dragoons on the western frontier in the years prior to the Civil War. The majority of the carbines were sold privately, with some going to state militias. The biggest claim to fame of the M-1853 Carbine was its association with abolitionist John Brown. Brown and his supporters purchased approximately 900 of the guns during the mid-1850s. Many of those guns were used (and subsequently captured) during Brown’s famous raid on the US armory at Harper’s Ferry in 1859. The guns involved in that raid were in the 10,XXX range, as well as the 12,XXX “ 18,XXX range. Due to the association with Brown, these guns are often referred to by collectors a “John Brown Sharps”.

This Sharps Model 1853 Slanting Breech Carbine is in about FINE condition. The gun shows use, but no abuse and remains extremely crisp and sharp throughout. The gun is clearly marked on the lock plate, to the rear of the hammer: SHARP’s / PATENT / 1852, although the “1852” date is a little weaker than the rest of the mark. This is the earlier patent marking, with the apostrophe in the word “SHARP’S”. The tang of the carbine is marked SHARPS / PATENT / 1848 along with the serial number 14624. The matching serial number is present under the barrel, and is concealed by the forend. The top of the barrel is marked in three lines: SHARPS RIFLE / MANUFG. CO. / HARTFORD CONN.. The left flat of the barrel is marked with a military style sub-inspectors mark, a single K. A similar inspection mark, a single T is present in the stock, immediately behind the sling bar and ring. No other indications of government or military inspection are present, suggesting that these may be state inspection marks, placed on the carbine when it was obtained on the open market. The action of the carbine functions perfectly, and the gun is mechanically excellent. The Lawrence Pellet Primer System appears to be complete and functional as well. The falling-block loading system functions correctly as well. During the production of the Sharps M-1853 carbines, three different styles of breechblock designs were employed. The earliest (and most desirable to many collectors) had a platinum ring that sealed the breech of the carbine. This carbine has the platinum ring breechblock. The gun retains only traces of its original finish. The lock shows some traces of the original color case hardened mottling, most to which has faded and silvered out, with some dull mottled grays and browns visible in the protected areas. The barrel is mostly a smooth dove gray patina, with scattered areas of old dried oil, and some lightly oxidized age discoloration. Some minute traces of original finish are present in the protected nooks and crannies. The metal is extremely smooth, with very small, scattered patches of light surface pinpricking present on the barrel and breech area. The screws are all in good condition and most of them retain between 30% and 50% of their original blued finish (a few retain no finish). In general the screws show light slot wear, but nothing extreme. The bore of the carbine is in about FINE condition. It is mostly bright and retains crisp rifling, with some lightly scattered pinpricking minor pitting along the length of the bore. The gun retains its original and correct, early pattern (pre RS Lawrence patent) rear sight. The original long pattern, military style sling bar and ring are present on the left side of the carbine. The bar is mounted opposite the lock and terminates on the left side of the brass barrel band. The screw that secures the sling bar to the barrel band is missing, but should be an easy (and inexpensive) piece to replace. The brass furniture has a lovely, untouched, mustard patina, which is very attractive. The brass patchbox is lightly scratched with the name and unit information: John Golden Co K. Several soldiers named John Golden served in Company K of a Union regiment during the Civil War. The two most likely candidates both served in the “K” companies of Pennsylvania volunteer cavalry regiments. They are John Golden of the 17th PA cavalry, Co K and John Golden who served in K company of the 6th PA cavalry, better known to history as Rush’s Lancers. Further research may be able to determine which of these men (if either) carried this fine M-1853 Sharps carbine. The stock of the carbine rates about FINE+ and remains extremely crisp and sharp throughout. Both the buttstock and forend show the expected array of scattered bumps, dings and mars that are accumulated in military service. The toe of the stock shows a very small and extremely well executed repair that appears quite old. This tiny repaired chip is shown in the pictures below, but is almost unnoticeable unless you are really looking for it. The stock retains fine lines and relatively crisp edges, with no indication of sanding, excessive wear or abuse. The wood to metal fit throughout is excellent.

Overall this is a very crisp and fine displaying example of a fairly scarce and very collectible Sharps carbine. These guns often show up in very rough condition, as they tended to see heavy use both before and during the Civil War. Many of these guns went west with early settlers and pioneers and saw double duty both protecting and feeding those hearty Americans. Although this gun is within the range of potential John Brown carbines, it is not listed as one of the known John Brown guns. The gun is probably not one of the 250 carbines purchased for the 1st & 2nd Dragoon either. However, the military sub-inspection marks suggest that at the very least this gun was purchased for and inspected for state military use, and the name “John Golden Co K” provides a wonderful platform for further research regarding the use of this carbine during the American Civil War. This gun is in much better condition than the typical example of a “slant breech” M-1853 carbine, and will be a fantastic Sharps to add to your collection.