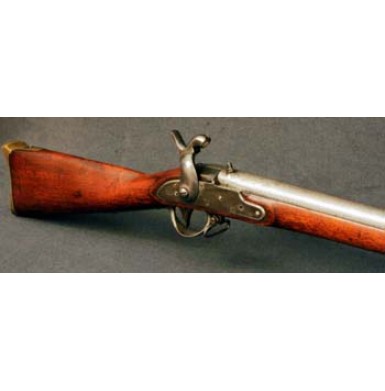 This is absolutely one of my favorite styles of conversion musket out there. I have always been fascinated by the many variations of flintlock conversion of military muskets that were produced in the decade prior to the Civil War, up through the early 1860’s. While the actual conversion process used for these muskets was not special or remarkable, the other modifications just make you wonder a little bit. These muskets have been called Sea Fencibles, Coast Artillery or even Navy Contract muskets. However, the designation of Massachusetts Militia Muskets is probably the most accurate name. We do know that Eli Whitney provided about 100 flintlock muskets similarly styled, and of the M-1812 pattern, to the State of Massachusetts around 1815. This is one of the percussion conversion Sea Fencibles that appear to have been delivered by Whitney in 1851. Approximately 300 were produced. Whitney is credited with the contract as the majority of those encountered today are muskets produced by his company, although occasionally one produced by Asa Waters or Springfield Armory will be encountered.

This particular musket is even less common as it is not only a Springfield Armory musket, but also a US M-1812 Type III (current collector terminology) or rather a Standard Model of 1815 Type IV using the new terminology established in Peter Schmidt’s recent two volume edition on US flintlock muskets. The gun is clearly marked on the lock plate with the typical Eagle / US forward of the hammer, and in three vertical lines SPRING / FIELD /1817 behind the hammer. The matching date 1817 appears on the barrel tang. The breech is marked with a small P / Eagle Head and with the number 8 8 stamped in front of the percussion conversion cone. The breech is also stamped MS for Massachusetts, and the same MS stamp is present on the stock flat opposite the lock. Traces of original US inspection cartouches are present at the tail of the flat opposite the lock and in the belly of the butt stock, behind the trigger guard. The defining “features’ of the Sea Fencible is the massive brass butt plate and the thinned down butt stock that has been altered to accept it. Both of these features are present, and the uniquely shaped heavy brass butt plate is numbered 25 on the top. The action of the gun functions crisply on all positions and the hammer responds to the trigger as is should. The gun retains a pair of sling swivels that appear to be period, and likely date from the time of conversion. However, they are not the original M-1812 swivels, as these swivels are retained by screws and the original ones produced at Springfield were the early style solid swivels that simply passed through the swivel stud hole and were brazed together, not relying on either a rivet or screw to retain them. This style of swivel was replaced wit the M-1816 and the gun may simply have been upgraded to the current swivel style at the time of conversion. The gun retains a very nice, original, ramrod that is full length and retains fine threads.

The gun has an overall medium pewter gray color to the metal, with scattered peppering, pinpricking and patches of age discoloration and darker staining. The metal is mostly smooth, with most of the wear and roughness in the breech area. This would be expected as the gun was converted by the Belgian and the area around the cone tapped into the barrel was exposed to significant wear from the corrosive mercury based primers used at the time. The bore is about good, with a dark color and large amount of relatively loose grit and light debris that would clearly benefit from a good scrubbing. The stock is in about fine condition, as altered during the period of use. The stock shows no breaks or repairs and retains good edges with no indication of sanding. There are scattered bumps, dings and bruises from handling and use as one would expect, but no signs of abuse. The stock has a very thin old coating of varnish that may well have been part of the conversion process as well. I believe this because the only other one of these rare muskets that I have owned (a Waters contract) had the same light added varnish.

Overall this musket rates between Very Good + and Fine. It is a wonderful, complete and unmolested example of one of the rarest of the many US flintlock conversion muskets. With a total of only about 300 produced, these rare guns are not often found on the market. This is a gun that could be the core of any collection of conversion muskets or a centerpiece of a collection that concentrated on Massachusetts’s arms and militaria. Even advanced collections rarely have one of these unique muskets in them. This is a great looking “no excuses’ example of a gun that is rarely found on the market at such a reasonable price.