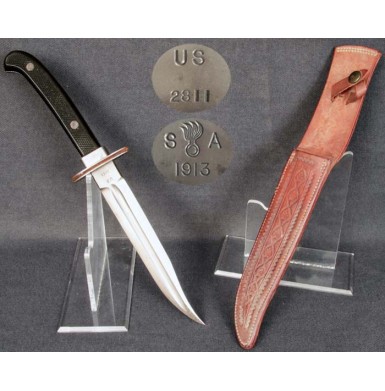 This is a NEAR EXCELLENT condition example of the World War II era fighting knives produced by San Antonio Iron Works. During World War II, hundreds of small machine shops and knife makers turned out thousands of combat knives for use by US troops. These knives have been grouped by collectors as “Theater Knives”, like those combat knives that were produced or modified “in theater” by US servicemen, even though these purpose made fighting knives were produced in the United States. The San Antonio Iron Works knives were mostly produced from obsolete US M-1913 “Patton Sabers”. Three fighting knives were manufactured from each sword. One used the original hilt, ricasso and the first few inches of the blade, and the next two were produced with new hilts and with blades made from the middle and end portions of the original sword blades. The knives were unmarked (other than any original marking that were present on the swords), but are identifiable by their very well made and decorated leather scabbards. Many of the sword-knives were produced with Bowie style blades that were quite intimidating in appearance, and the blades were often sharpened to a razor-like edge.

This particular San Antonio Iron Works fighting knife is in NEAR EXCELLENT condition, and is the most desirable of the knives, in that it is made from the hilt end of the original Patton saber. The retains 8 ““ of the original Patton saber blade, which has been shaped into a wicked Bowie knife shape, with an exaggerated 3” concave Bowie style clip-point with a false edge. The knife is about 14 ““ in overall length and retains the original hilt from the Patton saber. The cross guard is a 3” long, 1” wide oval with a thick leather washer sandwiched between two pieces of steel. The original Patton saber hard rubber grips are retained, and they remain in very fine condition, with sharp checkering and no chips or breaks. The saber blade has a light gunmetal gray patina, with only some very minor scattered patches of light age discoloration. The blade is smooth and free of any pitting, and appears to retain the original factory edge, with no signs of sharpening. The ricasso of the knife is still crisply and clearly marked on the obverse with US / 2811 and the reverse ricasso is marked S (FLAMING ORDNANCE BOMB) A / 1913. The marking indicate the original saber was serial number 2811, produced by the Springfield Armory in 1913. The leather scabbard is in NEAR EXCELLENT condition. The embossed decorations on the front of the scabbard remain very crisp and sharp, with only some light accumulation of dust and dirt present in the crisp recesses of the embossing. The stitching is all-original, is 100% present & complete and remains as tight as the day the scabbard was manufactured. The leather shows some very minor crazing to the finish on the rear and the leather remains in fantastic condition. The original hilt-retaining strap is present and the brass snap functions perfectly. The scabbard is designed to accommodate a belt up to about 5” in width, but shows no signs of having spent any significant time on a belt. The knife fits the scabbard well, but the scabbard seems to have shrunk slightly over the last 60 years, and about ““ of ricasso remains exposed when the knife is sheathed.

Overall this is a really fantastic example of one of the better known, factory produced US fighting knives of World War II. These knives made a real difference to the men who went to fight in the Pacific and Europe, as in the early months of the war, the only standard US fighting knife was the brass-knuckle Mark 1 1918 Trench Knife, which was good for fighting but not a good general purpose knife. These knives are a great example of a knife made from a recycled sword. These knives are well documented in Bill & Debbie Wright’s Theater Made Military Knives of World War II. They are featured in both Chapter 4, which covers “Identified Knife Makers”, as well as Chapter 6, which covers “Sword Knives”. An identical San Antonio Iron Works fighting knife and scabbard is also pictured on page 222 of Michael Silvey’s Knives of the United States Military “ World War II. Many WWII Theater Knives remain anonymous today, with their crafters completely unknown to us, so these identifiable maker knives hold a special place in World War II edged weapons collections. Few of these knives are as well documented and identifiable as those produced by San Antonio Iron Works. This one is just a fantastic example, which would be an outstanding addition to any World War II knife collection.