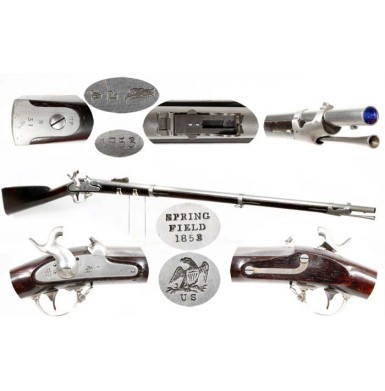 In May of 1851 the Ordnance Department authorized the manufacture of 2,000 percussion cadet muskets. The production of these muskets was necessary to supply various state military academies with arms under the Militia Act of 1808. The supplies of M1841 Cadet Muskets, which had been produced at Springfield between 1844 and 1846, had all been issued to the United States Military Academy at West Point, and only full-sized percussion conversion muskets were available for issue to the states. These guns were considered too large and heavy for cadet use, and this resulted in the authorization to manufacture new cadet muskets at Springfield. The M1851 Cadet Musket was quite similar to the M1841 Cadet Musket, both being .57 caliber smoothbore percussion muzzle loaders that were essentially scaled down versions of the standard issue US infantry musket, the M1842. Much of the pressure to approve these new muskets came from the state of Virginia, which had been trying to secure percussion cadet muskets for nearly a decade. The state had been consistently told that once the supply needed for West Point was produced that any additional muskets would be sent to Virginia for the use of the cadets at The Virginia Military Institute (VMI). This never occurred, so it is no surprising that President Zachary Taylor, a Virginia native, ordered that the initial production of M1851 Cadet Muskets be sent to VMI. A total of 4,000 of these muskets were produced between 1851 and 1853. Springfield production records indicate that 2,000 were completed and received into stores in fiscal year 1852 (July 1, 1851 through June 30, 1852) and an additional 2,000 were completed in fiscal year 1853 (July 1, 1852 through June 30, 1853). Of the 4,000 Cadet Musket produced, the first 300 were sent to VMI by order of President Zachary Taylor. These guns were shipped on May 5,1 852. Due to the fiscal year accounting system these guns were listed as having been “manufactured” in 1852, but the gunlocks and barrels were dated based upon the calendar year, 1851. This explains why all of the concretely identified examples of VMI issued M1851 muskets are dated 1851. An additional group of 200 M1851 Cadet Muskets were shipped to Virginia on August 4 of 1852 and were probably sent to VMI as well. Several other southern states received US M1851 Cadet Muskets during 1852, including: Alabama (245), Georgia (235), Kentucky (225), Mississippi (150), North Carolina (65), South Carolina (100) and Tennessee (80). In 1856, Virginia received 10 more US M1851 Cadet Muskets, and the state of New York received a total of 1,150 of the guns, with 150 shipping in 1855 and 1,000 in 1857. Up to this point none of the M1851 Cadet Muskets were issued to the US Military Academy at West Point. It was determined that since there was not a substantial change or improvement between the M1841 Cadet Musket then in use by the cadets and the new M1851, there was no reason replace the M1841 Cadet Muskets in service at West Point. This changed in 1855, with the official adoption of the M1855 Rifle Musket and the subsequent family M1855 rifled arms for issue to the US military. It was determined that the cadets at West Point needed to have experience and knowledge regarding the new rifled and sighted arms that were to become standard issue. As a result, in 1856 300 of the M1851 Cadet Muskets in store at Springfield were altered from smoothbore to rifled arms and had long range rear sights installed. An additional 14 were so altered the following year, and 9 more were altered in 1858, for a total of 323 rifled and sighted muskets. These guns were issued to the Corps of Cadets at West Point and were the first rifled arms to be used at a US military academy.

As originally produced the M1851 Cadet Musket was a single shot, muzzle loading, percussion musket in .57 caliber that was essentially a scaled down version of the musket that was in current service, the M1842. The musket was slightly smaller throughout, when compared to the M1842. The round barrel was 40” instead of 42”, and the lock was from the smaller M1847 family of percussion carbines and not a full-sized musket lock. The earlier M1841 Cadet Muskets had used locks of the size and configuration used on M-1841 Mississippi Rifles. The stock of the M1851 was also proportionally reduced in overall size compared to the M1842 musket and this is most visible in the smaller buttstock and much slimmer wrist. As previously mentioned, the guns were produced in .57 caliber instead of .69 caliber. When the M1851s were altered for use at West Point, they were rifled with 3 grooves, and had M1855 pattern long range sights installed. The rifling was .2” wide and was of progressive depth, being .015” deep at the breech end of the barrel and .005” deep at the muzzle. The rate of twist was a slow 1 turn in 72”, with a right-hand twist. The M1855 long-range sight was attached to the barrel with a dovetail notch for the rear portion of the base and a single spanner screw that secured the front portion of the base. A new, taller, iron front sight blade was soldered and riveted to the front strap of the upper barrel band, replacing the original brass blade front sight that was used on the smoothbore version of the musket. The trumpet shaped ramrod was also modified from its original configuration by machining a concave recess at its tip. This was to accept the newly adopted Burton designed, Mini” style conical ammunition. It is generally believed that all 323 of the Rifled & Sighted M-1851 Cadet Muskets were issued to West Point, although it is possible that only the first 300 were. The West Point issued M1851 Cadet Muskets are typically rack numbered on their buttplate tang and usually have an additional inventory number on the top of the lower barrel band.

This US M1851 Rifled & Sighted Cadet Musket (Flayderman 9A-306) is in VERY FINE condition. The lock of the musket is clearly and crisply marked behind the hammer in three vertical lines: SPRING / FIELD / 1853 and is marked with a spread-winged (EAGLE) / US forward of the hammer. The tang is crisply marked with the matching date 1853 as well. The upper left quadrant of the breech is crisply marked with the usual Springfield Arsenal V / P / (EAGLE HEAD) view, proof and inspection marks. The upper tang of the buttplate is marked with the usual US forward of the mounting screw and is also marked with the rack number B / 31 below the screw. This mark is stamped into the buttplate and is typical of West Point marked cadet muskets. However, no inventory number is stamped into the top of the lower barrel band. I have previously sold the M1851 Rifled & Sighted Cadet Musket that was rack numbered B / 15, and it was inventory numbered 155 on the lower band. The lock functions crisply and correctly on all positions and is in mechanically excellent condition. The original cone (nipple) is in place in the bolster and is in crisp condition, retaining about 50% of its original blued finish, which has dulled and faded from use and age. The iron barrel and furniture have a medium pewter patina. The metal is uniformly smooth throughout, with only some very tiny areas of light pinpricking and peppering present here and there, along with some scattered flecks of oxidized surface discoloration. These are most noticeable at the breech and bolster area and near the muzzle and ramrod tip. The bore is in FINE condition and shows very crisp 3-groove rifling its entire length. The bore is mostly bright with only some tiny scattered areas of oxidized darkness and some evenly distributed very light pitting along its entire length. The bore would probably be further improved with a good scrubbing but looks as if it would shoot wonderfully in its current condition. The original M1855 long-range rear sight is in place on the top of the barrel. It retains about 25%+ of its original faded and mottled original blue finish, most of which is present on the inside of the wall and the ladder. The sight functions correctly and adjusts smoothly. The correct, original long-range iron front sight is in place on the front strap of the upper barrel band. The original full-length ramrod is in place in the channel under the barrel and retains fine threads on the opposite end. The trumpet tip is correctly modified and dished for use with conical ammunition. The two sling swivels are both original to the musket. The stock is in about FINE condition overall and retains very nice edges and lines throughout. There is no indication that the stock was ever sanded, but there is some uneven toning to the coloration of the stock, suggesting that it may have received a coat of the oil or two over the years. The stock has a very attractive reddish-brown tone to it. The stock does show a handful of scattered bumps and dings from use and storage, as well as some minor surface scuffs and scrapes, but shows absolutely no abuse. The stock is solid and is free of any breaks or repairs. There is a tiny grain crack that runs from the rear of the lock mortise for about “. This does not in any way affect the displayability, appearance or structural integrity of the musket in any way. There are also some minor slivers of wood missing along the edges of the ramrod channel, mostly near the upper band, which is quite common with muzzle loading military muskets.

Overall this is a really attractive, very high condition example of an extremely scarce US M-1851 Rifled & Sighted Cadet Musket. With only 323 of these muskets produced with rifled bores and long-range rear sights, these guns are very scarce on today’s collectors market. These guns are particularly scarce in this kind of fine, original condition. If you like unique and rare US military weapons, it would hard to beat this one for condition, quality and uniqueness.