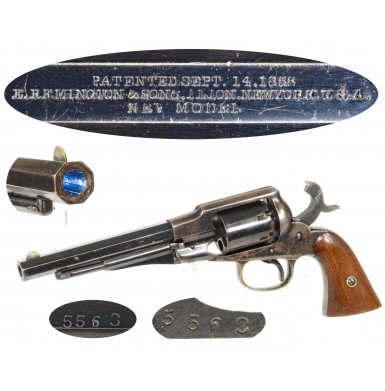 On August 17, 1858 firearms inventor Joseph Rider of Newark, OH received US patent #21,215. The patent covered “certain new and useful Improvements in that class of Fire-Arms known as ‘Revolvers’.” This patent utilized a single spring in the revolver’s action to serve not only as the mainspring, but to also act at the trigger spring and to operate the bolt stop that locked the revolver’s cylinder. While it appears that no firearms were ever produced based upon Rider’s “improvements”, the patent attracted the attention of E. Remington & Sons of Ilion, NY. Remington asked Rider to help develop a double action revolver. Rider relocated to Ilion, and by May 3, 1859 had been issued US Patent #23,861 for a double action percussion revolver. This design resulted in the Remington-Rider Pocket revolver which was introduced to the Remington product line circa 1860 and remained in production through 1873. Rider would go on to work for Remington for a number of years, becoming the Remington factory superintendent in 1865 and remaining in that job through 1883. During his tenure at Remington he received several firearms patents, including #40,887 on December 8, 1863, which resulted in the Remington-Rider Vest Pocket Pistol. On November 28, 1865 he received US Patent #51,269 for improvements to cartridge revolvers, and on July 29, 1873 he received US Patent #141,384 for improvements to  the “rolling block” action. Rider’s improvements to the Leonard Geiger patented action resulted in one of the strongest and most successful breechloading rifle actions of the latter half of the 19thcentury, and to many Rider is really the father of the rolling block.

As the American Civil War raged, and Remington’s production efforts were primarily concentrated on delivering .44 caliber percussion “Army” revolvers to the US government. However, it was clear that the war would not continue forever, and the Remington management team started to look towards developing arms that might be commercial successes when the war ended. One direction that the firm pursued was the production of a double action belt sized revolver. While the double action revolver mechanism had been extremely popular in Great Britain and Europe, this action system had met with limited success in America. Most of the double action revolvers in antebellum had been imported English Adams M1851 or M1854 patent revolvers, along with some 4thModel Tranter revolvers. The only American produced double action revolver to find favor with the US military during the per-war period was the Starr Model 1858, the acquisition of which was discontinued in favor of the more conventional Starr Model 1863 single action revolver. In the civilian market, the Cooper Firearms double action revolvers had met with moderate success, as had the Remington-Rider pocket revolvers. A handful of other domestically produced double action revolvers saw limited success, most notably the Pettengill revolver, which was also acquired by the military in limited numbers during the Civil War. Rider’s design project was to enlarge the earlier Remington-Rider pocket revolver design to create a larger framed double-action belt revolver in a more effective caliber. The end result was the Remington-Rider Double Action New Model Belt Revolver.

The new gun was introduced in 1863 and would remain in production for a decade, with total production between 3,000 and 5,000 revolvers. As the guns were serial numbered in the same range with the Remington New Model Single Action Revolvers, it is difficult to know for sure how many were produced, and a lack of surviving factory records make investigation into the matter difficult. The New Model Belt series of revolvers appear to be a concerted effort by Remington to produce a handy, personal defense type revolver that would be at home in a belt holster or even a large over coat pocket, with the power of a full-sized military handgun but in a smaller and more compact package. For the modern firearms enthusiast this new revolver would be considered the “compact” version of the “duty” sized firearm.

The New Model Belt Revolvers were scaled down New Model Navy revolvers with slightly smaller frames and shorter 6 ½” barrels, but retaining the 6-shot, .36 caliber cylinders. Between 2,500 and 3,000 of the guns were produced with a traditional single-action mechanism with the balance of 3,000 to 5,000 manufactured with Rider’s double action lock work. The earliest double action revolvers were produced with fluted cylinders, with the balance manufactured with conventional round cylinders. The fluted cylinder guns were produced circa 1863-1865 and appear in the serial number range under 1,000. The revolver design retained the familiar Remington silhouette with a solid frame that incorporated Fordyce Beals’ September 14, 1858 patent (#21,478) for a cylinder arbor pin that was retained by the web-shaped loading lever, which was only removable after the loading lever was lowered. The guns were primarily produced with a blued finish, a color casehardened hammer and a silver-plated brass triggerguard, with two-piece varnished walnut grips. A small number of revolvers were produced with nickel finishes, half-nickel half-blue finishes and more rarely silver plated finishes. Despite the quality of the revolver and its mechanism, combined with a handy and convenient size, the guns met with limited commercial success. It would be nearly two more decades before the double action revolver was widely embraced in America, and until that time the single action mechanism was the clear favorite for both the US military and for civilian handgun market as well. As the age of the percussion revolver came to an end and self-contained cartridge revolver became the wave of the future, Remington started to offer these double action revolvers as factory conversions to .38RF. Some were even offered with dual cylinders, allowing use as either a .36 percussion or a .38RF handgun. Production of the double action Remington-Rider Belt Revolver ended in 1873. The lack of commercial success when compared to other Remington handguns of the period is underscored by the fact that some 122,000 New Model Army revolvers were manufactured between 1863-1875, only two more years than the Remington-Rider DA Belt revolver was produced. That represents about a 25 fold difference in total production! As a result, the Remington-Rider Double Action Belt Revolver is a fairly scarce gun on the collector’s market today. As many were altered to cartridge, finding original percussion guns is particularly difficult, especially in the higher levels of condition.

This is a VERY FINE example of a scarce Remington-Rider Double Action Belt Revolver in its original percussion configuration. The pistol is serial number 5563, which places it in the latter half of production of these guns. The serial number is present on the bottom of the barrel (under the loading lever) and on the left side of the grip frame under the left grip. It is also written in pencil inside both grips and stamped numbered in the right grip as well. As is so often the case, the rear of the cylinder is not serial numbered, but is marked with a K and a 4. Some Remington authors feel that the guns with serial numbered cylinders required a significant amount of hand fitting to get the guns to time and index correctly, thus making it important that the cylinder remain with that specific gun. The top flat of the 6.5” octagon barrel is clearly marked in three lines:

As noted, the  pistol is in about VERY FINEcondition overall and retains 70%+ of the original blued finish overall. The majority of the original bright blue is present on the barrel, with some flaking, thinning and fading. The cylinder retains slightly less original bright blue, with the most loss present on the frame, backstrap and gripstrap. The areas where the finish had thinned, worn or flaked has developed a very attractive plum brown patina. The barrel flats and edges remain sharp and crisp throughout. The bore of the pistol is in about VERY FINEcondition as well. The bore is mostly bright with crisp rifling throughout and showing only some scattered frosting and light pinpricking. The case hardened hammer retains about 50% faded and dulled case colors, with a dark, smoky patina. The trigger retains about 80% of its bright niter blued finish with some edge wear and minor thinned loss. The brass triggerguard retains about 20%+ of the original silver-plating, which has worn and thinned from handling, carry and use. The metal is almost mostly smooth throughout, showing only some scattered flecks of light surface oxidation and some minute pinpricking here and there. The original loading lever is in place and works perfectly, locking into position as it should when not in use. The original half-moon shaped German silver front sight is in place on the top of the barrel, near the muzzle.

The double-action mechanism works perfectly. The action is crisp and works very well in both single and double action modes. The pistol times and locks up crisply and tightly. The cylinder retains all of the original cones (nipples), which remain in very good condition with minimal battering and wear. The two-piece walnut grips are in about VERY FINEcondition overall, with no breaks, cracks or repairs. They retain the majority of their original factory varnish, with some thinning, wear and loss. They do show a few bumps, dings and handling marks as would be expected, but they have not been abused. They fit the pistol very well and match its patina perfectly.

Overall this is really fantastic example of a relatively scarce Remington-Rider Double Action Belt Revolver. These guns do not appear for sale very often, and when they do, they are typically well-worn pistols that have been converted to metallic cartridge revolvers. This gun remains 100% complete, correct and original with a perfect action, clear markings and retains most of the original blued finish. For the advance Remington collector or American percussion revolver collector, this would be a find addition to your collection that would be rather difficult to upgrade.