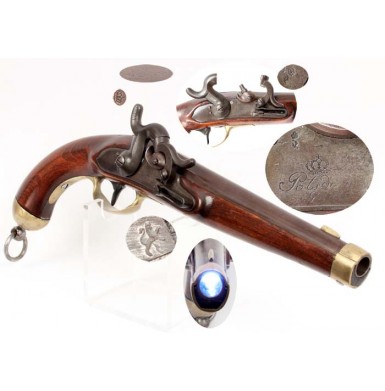 This is a FINE condition example of the Prussian M-1823 UM Cavalry Pistol. These large, dragoon pistols were originally adopted as flintlock cavalry weapons in 1823. When Prussia adopted the percussion ignition system, many of the guns were so altered during the early 1850’s. The pistols were about 16” in overall length and were fully stocked to the muzzle. The 9 3/8” long barrel was approximately .62 caliber (15.8mm) and was smoothbore. The pistol weighed in at a hefty 3 pounds, 3 ounces. As was typical of Prussian arms of the period, the guns were stocked in Beech and had brass furniture. Another feature typical of Germanic and Austrian pistols of the era was the lack of a ramrod channel in the guns, as the rods were carried separately from the pistols. The guns had a bulbous, club like butt with a large brass cap and an in iron swivel ring to allow the attachment of a sling or lanyard. These pistols saw service from their adoption to as late as the Franco-Prussian War of 1870. Even though the revolutionary bolt-action needle fire rifle had been adopted by the Prussian military in 1841 (and was in widespread service by 1848) the evolution of the handgun was minimal in Prussian service during the mid-19th century.

This Prussian M-1823 UM Cavalry Pistol is in about FINE overall condition. The designation “UM” stood for Umgeaendertes Modell, literally “altered model”. As noted the pistol was originally produced in flintlock and was then altered to the percussion system. The gun is dated 1849 on the bottom of the barrel, and this was most likely the date of original manufacture, making it a very late production flintlock pistol and likely one of the last M-1823s manufactured. The M-1850 percussion pistol officially replaced the M-1823 flintlock pistol only a year later. The gun is marked (CROWN) / POTSDAM / GL on the lock, forward of the hammer, indicating the gun was manufactured at the Prussian state arsenal in Potsdam. The last part of the word “Potsdam” and the “L” in the GL mark are light, likely from the work done during the conversion and alteration process. The upper edge of the lock plate is marked with a Rampant Lion, forward of the percussion bolster. The pistol is marked with a variety of small crowned inspection marks and numerous W marks, referring to the Prussian ruler during that time, King Friedrich Wilhelm IV. The gun bears the assembly mark 32 on most of its major components and screws. This was the original assembly number from its initial production as a flintlock. Several parts bear the assembly number 13 from the alteration process. The bottom of the barrel and the breech plug, as well as the bolster clean out screw, the cap safety system and the forward lock screw all bear the number 13. The only part with a mismatched mating number is the tang screw, which is numbered 44 and is likely a period replacement, or simply the result of an arsenal worker not paying attention when reassembling the altered gun. The metal of the pistol is in lovely condition, being mostly smooth with only the most minor patches of light peppering and mild pinpricking. The barrel retains about 50% of its original lacquer browned finish, which has faded and thinned throughout. Much of the finish remains on the underside of the barrel as well. The bore of the pistol is in EXCELLENT condition and is brilliant and bright. The bore is wonderfully smooth and shows no noticeable pitting. The lock has a mottled plum brown and pewter patina, and appears to retain traces of its original case hardened finish. The lock shows a small finial teat to the rear of the lock plate, reminiscent of the M-1809 Prussian flintlock musket lock. The cap safety is complete and fully functional. The lock operates crisply on all positions and is mechanically excellent. The brass furniture has been lightly cleaned at some point and has a lovely golden color. The original sling iron ring and swivel stud are present in the butt of the pistol, and the original brass blade front sight is present near the muzzle. The stock is very crisp and sharp with no breaks or signs of sanding. All of the edges remain crisp and well defined. There is an old grain crack running from the left stock flat at an angle towards the barrel channel. It is almost invisible from the exterior of the pistol as it is so tight and runs with the grain of the beech wood. However, with the barrel removed, the old glue repair is visible. This area is completely stable and as noted, barely visible from the exterior, but is noted for exactness.

Overall this is a very crisp and extremely attractive example of a fairly scarce mid-19th century Prussian cavalry conversion pistol. The gun is complete and original in every way and is mechanically excellent. The gun retains lots of original finish, has a very crisp stock and an excellent bore. This would be a great addition to any collection of early military pistols, especially one that focuses on 19th century German state arms.