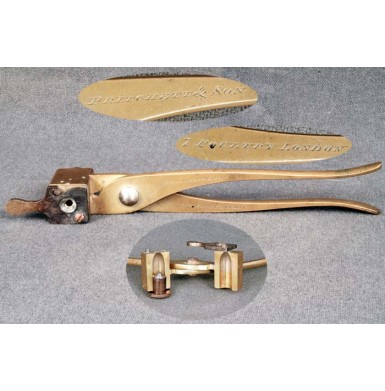 This is an about EXCELLENT condition example of a single cavity bullet mold for use is casting the .577 “Enfield” pattern Pritchett bullet. The “Pritchett Bullet” was developed by the father & son team of London gunmakers R.E. and R.T. Pritchett. The smooth sided, hollow cavity bullet was a modification of the expanding base, conical projectile developed by Frenchman Claude Mini”, and became the standard British military bullet through the lifespan of the P-1853 family of muzzle loading long arms. R.E. Pritchett & Sons traced their gunmaking lineage to Samuel Pritchett, who was first listed as a gunmaker in 1796 at Swan Street, Minories. Samuel’s son Richard Ellis was subsequently listed as a gunmaker for the first time in 1813 on Prescot Street. R.E. Pritchett was listed at a variety of London addresses over the next 20+ years, eventually establishing himself at 59 Chamber Street in 1832. In 1851 he added his son Robert Taylor to the name of the firm, officially becoming Pritchett & Son. In 1854 they added a location (likely a retail outlet) at 7 Poultry and in 1855 they added a third location at 18 St. Mary Axe. In 1856 R.T. established his own business, separate from his fathers, and added an 86 St. James Street and 24 Great Prescot Street to the already established locations. Apparently all of these manufacturing and retailing locations remained in business through at least 1863 or 1864. During the course of the American Civil War R.T. Pritchett delivered a number of P-1853 Enfield Rifle Muskets to the Confederacy, via orders that originated from Sinclair, Hamilton & Company. A number of extant examples of Sinclair, Hamilton & Company marked rifle muskets with R.T. Pritchett locks exist in collections today. All of the Confederate orders of P-1853 rifle muskets were packed 20 to a case, along with 20 socket bayonets, 2 nipple keys (cone wrenches) and 1 bullet mold per case. As such, it would not be uncommon for Pritchett to provide molds marked with his family name with his Confederate contract arms.

This .577 Pritchett Mold is really a Pritchett Mold! It is clearly marked on one mold handle PRITCHETT & SON and on the other handle, 7 POULTRY LONDON. The mold is rather large and is 10 3/16” in overall length, including the extension of the sprue cutter. The brass body and handles of the mold measure 9 1/8”. The handles are 8” long and the mold block is 1 1/8” long. The hefty mold weighs in at 1 pound, 2 ounces. The interior of the mold measures about .570” in diameter and the base plug diameter is about .568”. The mold is really in EXCELLENT condition. The markings are crisp and fine, and the brass body and arms have a lovely, untouched bronze patina. The mold cavity is in perfect condition, with brilliant, smooth walls and no dings or mars at all. The original fire blued iron sprue cutter is in place on top of the mold block and functions smoothly. The sprue cutter retains about 60%+ of its original, brilliant fire blued finish. The original base plug is in place as well, and retains about 60%+ of its original blued finish as well, fading to plum due to exposure to heat while casting bullets. Both the cutter and the plug show some light to moderate surface oxidation and light surface rust is present on both pieces. This could be easily cleaned off, if so desired. The exterior of the mold shows only the most minor handling bumps and dings, and is free of any signs of abuse.

Overall this is simply an outstanding example of the classic .577 Enfield bullet mold, marked by the men who designed the bullet itself. With R.T. Pritchett’s strong association with Confederate delivered Enfields, this would be the perfect accessory to display with your Confederate marked Enfield, especially if you happen to own a Pritchett marked gun!