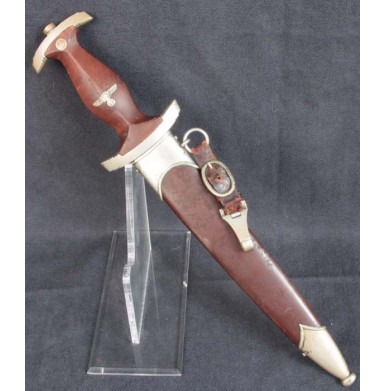 This is a VERY GOOD example of an early production SA dagger by the Solingen maker C. GUSTAV SPITZER. The SA Sturmabteilung was formed in 1921 as the paramilitary wing of the N.S.D.A.P. (Nationale Sozialistische Deutsche Arbeiter Partei /National Socialist German Workers Party). The “Brown Shirts”, as they were also known, were really intended to provide security for Nazi party events, but quickly became the “strong arm enforcers’ for the party. The group started with less than 50 members, and by 1934 had swelled to about 4 million. The SA was the first group within the Third Reich to be officially sanctioned to wear a standard dress dagger as part of their uniform. The SA dagger was officially adopted in 1933 and featured the runic intertwined SA lightning bolt signet set into the wooden grip, along with the national eagle emblem. The blade was acid etched with the SA motto: Alles fur Deutschland, which translates to Everything for Germany. The daggers were initially marked on the obverse of the blade with the maker’s name and logo, but in 1935 these marks were changed to an RZM Code. This was a code assigned by the RZM (Reichszeugmeisterei / Reich Quartermaster’s Office) a controlling authority established by Hitler and the Nazi party in 1935 to oversee the quality and approval of all SA related uniforms and equipment. The RZM assigned codes for all of their approved manufacturers, and this code replaced the makers name on the item.

This is a nice, early, Pre-RZM SA dagger, manufactured in 1933 or 1934. The blade is in very nice condition, retaining 90%+ of its original bright polish, with some scattered light age staining, minor oxidation and some tiny patches of minor discoloration. The acid etched Alles fur Deutschland motto is in excellent condition, as is the C. GUSTAV SPITZER / * SOLINGEN * makers mark, which encircles a lion. After 1935 Spitzer’s name and logo were replaced with the RZM code 7/80. The tang of the dagger is marked with the Spitzer lion logo in a circle, over the number 10. The dagger is mounted with the usual nickel-silver mounts and a stained pear wood grip. The grip is inset with the usual runic SA logo near the pommel and with the German National Eagle closer to the cross guard. The eagle is the early nickel silver eagle, not the later aluminum one. The eagle retains good detail throughout and the SA runic insert is in very good condition as well. The grip shows the normal bumps and dings from use, but no breaks, cracks or repairs. The reverse lower cross guard is Gruppe stamped, Ns (NIEDERSACHSEN or Ost-Hannover & Sudhannover-Braunschweig) indicating the dagger was used by a member who operated in the command / defense division in and around the state of Brunswick and the province of Hanover. The original reddish brown lacquered sheet metal scabbard is included with the dagger, and is in very good condition as well. The scabbard retains about 80%+ of its original paint, mixed with scattered patches of light to moderate surface oxidation and with some minor wear and loss to the finish. There is one shallow, thumb-sized dent on the obverse of the scabbard. The nickel silver mounts are in good condition, with a pleasing, slightly frosted appearance. The scabbard mounts are retained by the original screws, but one of the screws that secures the drag is missing. The original single leather hanger is present with the dagger. The leather shows some cracking, crazing and finish loss, but remains relatively pliable and retains the original (and nearly always missing) leather keeper. The nickel-plated buckle is in good condition and has the same frosty patina as the scabbard mounts, along with some verdigris build up. The original nickel plated, spring clip is present at the end of the hanger as well and functions correctly.

Overall this is a nice, pre-RZM example of a very good condition SA dagger by one of the less often encountered dagger makers. This is a nice solid example with an attractive blade, good etching and a nice makers mark. These early daggers are getting harder to find in complete, decent condition, and this one is priced between $100 and $200 under the current market price for an early Spitzer SA dagger in this condition, and you get the hanger as well!