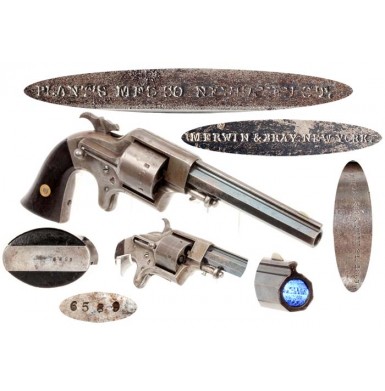 This is a rare example of an iron frame .42 caliber “cup primed” large frame or Army size Plant’s Manufacturing Company Front-Loading Revolver. The six shot, front loading Plant patent revolver, was produced by the Plant’s Manufacturing Company of New Haven, CT. Approximately 8,000 of these revolvers were produced during the mid-1860s, firing their patented “cup primed” cartridge. The Plant’s Manufacturing Company was financed by Merwin & Bray, who also acted as the sales agents and exclusive distributor for the products. The managing partner in the firm of Merwin & Bray was Joseph Merwin, who would one day go on to produce some of the finest cartridge revolvers in the world, under the name Merwin, Hulbert & Company. Merwin would also go on to be one of the primary shareholders in Hopkins & Allen (formerly the Bacon Firearms Company) and one of the largest investors in the Evans Repeating Firearms Company. Merwin was a firearm visionary and was always on the forefront of repeating cartridge firearms technology during the mid-19th century. This particular example of a Plant’s Manufacturing Company Front Loading “Army” Revolver is a Third Model. The 3rd models were produced in the 700-8000 serial number range. As with most of the firearms Merwin was involved with, the guns were always undergoing evolution and improvements to make them as perfect as possible. The 3rd Model guns were made in two types, the majority were the “heavy framed” version in the 700-6800 serial number range, with the last guns produced with a lighter, thinner frame and a “pinched” site groove in the top strap. These “light frame” 3rd Model Type II guns were produced in the 6800-8000 serial number range. Practically all of the 3rd Model guns were manufactured with a silver plated brass frame, although a very few were produced with iron frames. These very scarce revolvers appear in the 65XX serial number range. The revolvers had a single action mechanism and were fired with a spur trigger. The cylinder and ribbed octagon barrel were blued, and the grips were 2-piece, either walnut or rosewood, usually with a varnished finish. The grip panels were typically stamp-numbered to the gun on their interior. The unique “front loading” cylinder design was an attempt to evade the Rollin White “bored through cylinder” patent, which was held by Smith & Wesson. A manual ejector rod was mounted on the rear of the right side of the frame, and was used to push empty cartridge casings out the front of the of cylinder chamber mouths. The gun was about the same size as Colt M-1849 Pocket revolver, but was much easier to reload and packed more firepower into the same sized package. As a result, the Plant’s Manufacturing Company Front Loading “Army” Revolver became a popular choice for the armed citizen and military officer of the mid-1860’s. The robust, solid frame design was much stronger than its direct competitor the Smith & Wesson #2 “Old Army”, and the .42 cartridge packed more punch than the S&W in .32 rimfire.

This Plant’s Manufacturing Company Front Loading 3rd Model “Army” Revolver is one of the very scarce iron frame guns that are occasionally found it the 6,500 serial number range. The pistol is in VERY FINE+ to NEAR EXCELLENT condition overall. The 5” ribbed octagon barrel retains about 70%+ of its original blued finish, with most of the wear and loss along the sharp edges of the octagon barrel and the primary contact points. The barrel also shows some thinning and fading of the blue due to age, as well as some lightly scattered freckles of oxidation mixed with the finish. The barrel is mostly smooth throughout, with only some very lightly scattered pitting, and some small patches of pinpricking near the muzzle and breech. The barrel is marked in a single line on the top of the rib: PLANT’s MFG. CO. NEW HAVEN. CT. and is crisply struck on the left side: MERWIN & BRAY . NEW-YORK. The cylinder retains only about 10% of its original blued finish, which has faded and mixed with a smooth plum-brown patina. The cylinder is crisply and clearly marked in a single vertical line: PATENTED JULY 12, 1859 & JULY 21, 1863. The cylinder shows some light pinpricking, mostly around the chamber mouths, but is otherwise mostly smooth. The case hardened hammer retains about 20%+ faded case colors, with some tiny areas of vivid color, mixed with a silvery-gray patina. Most of the remaining mottle case coloring is visible on the left hand side of the hammer. The brass frame retains thinned traces of the original silver plated finish. The thinned silver has mixed with the pewter gray patina of the iron frame, making it difficult to distinguish one from the other. The thicker areas of trace silver are in the nooks and crannies of the frame, where they can be seen because they are tarnished and have a deep gray-black color. The iron frame is mostly smooth, with only some lightly scattered pinpricking and a casting flaw on the right hand side, about the size of a screw head. The iron backstop shows some thin, brown surface oxidation as well. The bottom of the iron grip frame is serial numbered 6589 and the matching serial number is found on the rear face of the cylinder between the chambers and stamped inside both of the grip panels. The pistol functions perfectly in terms of its firing action. It times and indexes crisply and correctly locks up tightly. The only minor mechanical issue is that when the revolver is placed on half cock to allow free rotation of the cylinder for loading and unloading, the bolt stop will lock the cylinder after it has been rotate on chamber. This is a minor issue and can be avoided by holding the hammer slightly past the half cock notch, which keeps the bolt stop from engaging. A competent gunsmith could probably fix this minor issue with a file in just a few minutes. This is minor and does not affect the display or functionality of the gun, but it is mentioned for exactness. The frame mounted ejector rod functions smoothly, exactly as it should. The bore of the revolver is in about VERY GOOD condition. It is almost entirely bright and retains very crisp rifling, however there is light to moderate pitting scattered along its length, with some patches of rough build up in the grooves near the muzzle. A good scrubbing would probably improve the bore. The two-piece rosewood grips rate about VERY FINE, and retain about 60%+ of their original varnish. The grips are complete and solid, with no breaks, cracks or repairs noted. Even the sharp leading and trailing edges of the grip panels remain is sharp, crisp condition. The grips do show a number of minor bumps, dings and bruises from carry and use, but show no signs of abuse or excessive wear.

Overall this is a really nice displaying example of a desirable Civil War era, mid-1860s metallic cartridge revolver. These early cartridge guns are always intriguing, as they represent the tortured patch that the firearms industry traveled in the Civil War era, moving from percussion arms to self contained metallic cartridge arms. These guns saw significant use with private soldiers and officers alike during the course of the war, and deserve to be included in any collection of Civil War Secondary Martial Revolvers, along with the Smith & Wesson #2 Old Army, the Moore’s Patent 7-shot Belt revolver, and all of the other early cartridge revolvers that were experimented with during that era. Many of these guns were discontinued early in their production due to the violation of the bored through cylinder patent held by Smith & Wesson, and some collectors even specialize in these “patent infringement” guns. The fact that this is a very scarce iron frame variant makes the revolver even more valuable and collectable, but it is priced at about the same point as many dealers price the much more common brass framed version. This is a crisp and attractive little revolver that will be a great addition to you collection of Civil War era handguns.