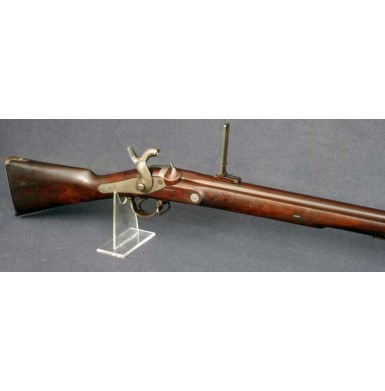 Outstanding Thouvenin Saxon Rifle from the William B Edwards Collection

This is a really outstanding example of an early Thouvenin system rifle that was produced in Li’ge, Belgium on contract. These guns were sold to the various Germanic such as Saxony, Baden, Hesse, as well as to other small countries. They were often manufactured in very small quantities and often blended the features found on other military rifles of the time, while keeping the styling that was familiar to the principality that had ordered the guns. The gun has the typically Belgian military feature of a reinforcement screw through the stock, ahead of the lock. A nearly identical regulation rifle musket with a 39” barrel was produced for the Belgian military as the Model 1850 Rifled Musket and according to noted arms author DeWitt Bailey, this was the first regulation Mini” Rifle and was the basis for the British Pattern 1851 Mini” Rifle. The Thouvenin breech system was first adopted in France in 1846. The system is better known as the pillar breech or Tige system, and had a pillar in the middle of the breech that the projectile was rammed against to force the base of the bullet to expand and take the rifling. The powder would reside in the void between the pillar and the wall of the barrel, in a similar fashion to the older Delavigne or chamber breech system, where the powder was in a chamber under the bullet. The rifle is .71 caliber and is 50” in overall length. The barrel is rifled with four grooves with a very fast rate of twist. The 34.25” barrel has a classic octagonal breech that quickly blends to round and is secured to the stock with two flat keys, the upper sling swivel screw and the breech screw. A pair of iron “pipes’ retains the ramrod. The upper one is flared to assist in the returning the rod, and second one about halfway between the upper pipe and the stock swell that accepts the rod. There is no entry pipe at the stock swell. The original, heavy cupped Thouvenin style ramrod is present and is full length and still retains its threads at the end. The lock is the classic French/Belgian style back action percussion lock and is retained by a forward screw and rear mounted spanner screw. The rear site is a fully adjustable long-range ladder that is calibrated to 1200 meters (a somewhat optimistic range) and has a sliding sight window that adjusts up and down the ladder. The front site is a large iron blade and a saber bayonet lug with a 3.25” long key is on the right side of the barrel near the muzzle. The furniture is of iron, including a heavy buttplate and the forend cap. The lock was casehardened, the iron furniture bright and the barrel was browned. The rifle was formerly in the collection of Civil War arms historian and author William B Edwards, who wrote the seminal work on Civil War small arms: CIVIL WAR GUNS. According to the tag accompanying the gun, Edwards purchased it from a museum in Liege, Belgium. The rifle is accompanied by an old, typed descriptive tag that reads:

Weapon from the Collection of Wm B. Edwards author of Civil War Guns, used in his 15 years of research and this gun is picture (sic) on page 67 at top; Edwards obtained this like new piece from the Leige (sic) Museum: Carbine a Tige, 1842M Mini” Rifle. 69 cal, The Mini” Rifle, sighted to 1100 meters this Thouvenin system piece is an excellent shooter, An (sic) is one of the MOST IMPORTANT DEVELOPMENTS OF THE RIFLE as come to be known. Gun is excellent and a rare one. Takes Sword Bayonet. Beautiful gun.- new perfect. Some were imported for our CW.

I have quoted the tag exactly as it is written and have retained the grammatical and spelling errors. Obviously, the reference to the French M-1842 rifle only refers to the basic appearance, as the M-1842 was a Delvigne Chamber rifle, not a Tige rifle. The French did not produce Tige rifles until the Model 1846 and Model 1853. The US Government purchased about 20,000 of the .71 caliber “French/Belgian” pattern rifles during the American Civil War. In the 1865 Ordnance Department returns, all rifles of this general style are listed simply as Rifles, Belgian or Vincennes, saber or sword bayonet “ cal. 71”. The US considered these to be 3rd Class arms. Edwards notes in Civil War Guns that George Schuyler purchased several thousand of this pattern arm in Dresden, Saxony. Edwards describe this pattern of rifle on page 69 of his book, where he notes: The short rifle has a back action lock, strongly built, and pin-fastened stock with two wedges. The stock tip has a curved back edge”.The furniture is iron, gray casehardened; when made properly the model is a very strong and serviceable weapon, adapted for saber bayonet. The Saxon model rifle a Tige has a patent breech, the Tige screwed into the bottom of the chamber. The Confederate 1862 Ordnance Manual also refers to this pattern of rifle as well, and describes Belgian Rifles as: “Carbine “ Tige, having a long stem in the chamber of the breech, with a caliber of .70”. It is believed that at least one large shipment of Belgian made Tige rifles were delivered in Savannah in September 16, 1861 “ most of which belonged to Fraser, Trenholm & Company.

The tag is correct when it notes that the gun is excellent and a rare one. These early Tige rifles are rarely found available for sale, especially in this truly museum quality condition. The gun truly rates Excellent overall, and retains about 95%+ of the original brown finish on the barrel, showing only some minor thinning and wear along the high points and sharp edges. The lock is completely unmarked and functions very crisply. It retains about 10%-20% faded case colors, blended with a smooth smoky silver color. The iron buttplate, triggerguard and nose cap all have a medium pewter patina with some light scattered patches of minor age discoloration. The rifle retains both of the original sling swivels, the original full-length ramrod and the original rear site. All the metal remains crisp and sharp with excellent edges at the octagon breech section. A typical Belgian proof is visible on the left barrel flat, near the edge of the stock and the only other external mark that is visible is a tiny (CROWN) / LM makers mark on the top of the butt plate. The mark is likely the mark of Le Mille a Li’ge based gun maker. The bore is like new and is brilliant and bright with exceptionally sharp rifling. The stock rates about Excellent as well, with absolutely no cracks, splits or repairs. The edges remain sharp and crisp and the stock has never been sanded. The stock retains a relatively open grain that still has some “feathers’ present. There are a handful of minor handling marks and tiny dings, but the gun was clearly never issued or saw any material use beyond storage and display.

Overall this is simply an excellent example of an early transitional rifle that bridged the gap from early pinned barrel guns to the newer banded rifles that soon appeared with smaller bores. The gun is pictured in one of the most important books ever written about the Civil War small arms and was owned by one of the most important early researchers in the Civil War arms field. The gun is simply outstanding and would clearly be the centerpiece of any Civil War long arms collection, especially one that centers on imported rifles and muskets.