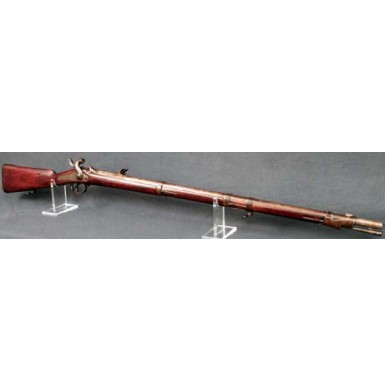 This is a truly outstanding example of one of the more rarely encountered imported long arms used during the American Civil War. Just under 29,000 Saxon or Dresden rifles & rifle muskets were imported by the US during the war, with Union purchasing agent George Schuyler obtaining 27,055 for the US government in Dresden and the balance of 1,740 being purchased by Marcellus Hartley. These guns are instantly identifiable in period images due to their distinctive double-strapped middle barrel band. According to ordnance records, the gun came in two models, the M-1851 with a 37.125” barrel and the M-1857 with a 40.25” barrel. The ordnance records only specifically refer to 236 of Hartley’s purchases being of the Short Dresden Rifle variety. Existing examples of the shorter rifle are very rarely encountered. Interestingly, the Dresden rifle was one of the very few European imports rated as “First Class’ by the Ordnance Department. US Ordnance records show that these guns were issued 44th & 55th Illinois, 9th Iowa, 22nd & 30th Wisconsin and the 56th Ohio infantry. This is one of those rarely encountered M-1851 rifles with the shorter barrel. The guns were the product of PJ Malherbe & Cie of Liege and are all marked with his maker name on the rear of the back action lock, behind the hammer. Both the M-1851 & the M-1857 had .58 caliber bores, rifled with four grooves and had a rear site with a fixed 200 yard block and two flip-up site leaves that were calibrated for 400 and 600 yards, respectively.

This particular M-1851 rifle is 100% complete and original. It retains the original multi-leaf rear site, including both of the long distance leaves. It also retains both of the original sling swivels and the original and correct ram rod, which is full length and numbered to the gun. When the Malherbe company built the rifles they were kind enough to number every single part, down to the screw heads! All of the parts on the gun have the matching assembly number 321. The stock and the barrel of the gun are actually serial numbered 11321, and those last 3 digits are the ones found on the balance of the rifle. The gun is marked on the lock in two lines: PJ Malherbe & Cie over A Liege. The gun is also profusely marked with Liege proof marks and Malherbe's maker mark. The lock functions well and is very crisp. The gun is also marked on the top of the stock with the numbers 62 / 12. Originally I had thought that the 62 was a rack number, as no 62nd regiment that I was aware of was issued the Saxon rifle. However, I have now owned three M-1851’s and one M-1857 Saxon rifle that were marked with the same 62 (and I have seen one other M-1857 with the same mark). This ruled out the rack number theory and makes me believe that this gun was actually issued to the 62 Illinois Infantry. According to ordnance records, the 62nd is listed as initially carrying French and Belgian Muskets. Since these rifles were produced in Belgium and had a French style back action lock, it is very possible that they were simply misidentified by the officers issuing and recording the status of the arms issued to the 62nd Illinois. We know that the ordnance officers were notorious for grouping many similar types of arms together in reports, often identifying them incorrectly in the process. In fact, about 2 years ago I owned the twin to this rifle it was marked identically, except it was 62 / 19. I can only assume that the lower number is the “rack” or man number to whom the rifle was issued to.

Overall this really lovely M-1851 Saxon (Dresden) Rifle is in about FINE condition. As previously mentioned, the gun retains the original .58 caliber bore with 4-groove rifling. The bore is in about VERY GOOD condition with some patches of darkness and light scattered pitting along its entire length. However, the bore retains crisp and strong rifling and should clean up quite well. The barrel measures the correct and full 37 1/8” in length. The gun has a wonderful smooth medium brown patina over the iron furniture and barrel, with mostly smooth metal and only some scattered areas of light peppering and minor pinpricking. The only area that shows any real pitting or roughness is a right around the breech area “ the result of caustic cap flash from the mercuric percussion caps. Even this wear is quite minimal and minor. The stock rates FINE + with only the normal bumps and dings from military use. The edges that should be sharp remain so, especially around the cheek rest. There is a very tiny hairline crack at the rear of the lockplate, that is less than ““ long and is non-structural. Even the ramrod channel remains crisp and sharp, without the typically encountered slivering and wear that is usually encountered with these rifles.

Overall, this is finest condition and only 100% complete Saxon / Dresden rifle that I have ever had the opportunity to see. Most have at least some small issues such as the ramrod being a replacement (or non-matching number) and/or the rear site missing (or at least one or more of the leaves). The correct, original ramrods are very rarely encountered on these guns, and this gun not only has the rod, but it is numbered to the gun! I know that to many collectors of Civil War import arms the Saxon / Dresden rifle is one of those “Holy Grail” guns that they have always wanted to own, but these guns are so rarely encountered on the market. For those who have wanted to add one of these rare rifles to their collection for many years, so here is an opportunity that is not likely to be repeated any time soon. In fact, it has been nearly 2 years and 350 long guns since I have had the opportunity to offer one of these guns for sale “ I am actively searching for these guns constantly. This M-1851 is only the third that I have ever been able to offer for sale, so this is a great opportunity to add a wonderful and rare import rifle musket to your Civil War arms collection. This gun is 100% complete, correct and absolutely righteous. It has a fabulous, untouched look, has never been abused, and is not likely to be a gun you will ever have the chance to upgrade from. In fact if this one doesn’t sell any time soon, I really won’t mind as I’d love to keep it a while for myself!