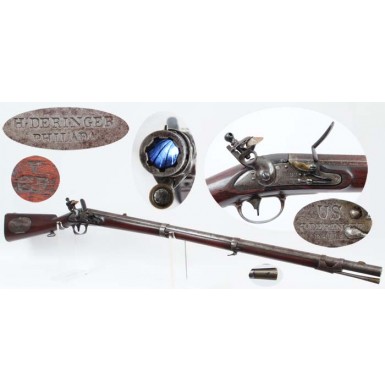 This is a simply outstanding example of a very scarce and early production US martial flintlock rifle. The US M-1814 Rifle was produced in very limited quantities by Henry Deringer of Philadelphia, PA and Robert Johnson of Middletown, CT. Each maker was awarded a contract for 2,000 rifles. The rifles were intended to arm additional regiments of riflemen that were raised during the War of 1812, however only a handful (probably less than 100) of the rifles were even delivered prior to the signing of the Treaty of Ghent on December 24, 1814. The rifle was designed by Marine T Wickham, who was at the time a US arms inspector working at the Schuylkill Arsenal (aka Philadelphia Depot) and had formerly been the chief armorer at Harper’s Ferry. Wickham subsequently left the Ordnance Department to go into arms production himself, and it was George Flegel (who Wickham had trained) that eventually inspected the rifles Wickham had designed, and Deringer subsequently manufactured and delivered. The US M-1814 Rifle was a flintlock ignition, muzzle loading rifle with a .54 caliber bore that was rifled with 7 deep grooves. The rifles had a half-octagon, half round iron barrel, and the transition between octagon and round took place at the rear barrel band. The rifle’s 33 ““ barrel was retained by three iron bands, the upper one double strapped, and the bands were retained by spring loaded studs set in the stock, instead of the more common band springs that are typical of 19th century US military long arms. These spring studs were designed by Marine T. Wickham and were known as “Wickham’s Improvement” during the period or more simply by collectors today as “Wickham Studs”. These spring-loaded studs also appear on the US M-1812 Type II muskets, which were produced during the same era. The M-1814 Rifle was produced from 1814 through 1817 and was superseded by the US M-1817 Common Rifle. The term “Common Rifle” came into use after the adoption of the M-1819 Hall’s Patent Breechloading Rifle, and was used during the period to differentiate between the muzzle loading “common rifle” and the new breechloader. The M-1814 can be seen to be a stylistic bridge between the earlier M-1803 flintlock rifle produced at Harpers Ferry and the later M-1817. The M-1814 retained the 33 ““ barrel of the early production M-1803 rifles, but introduced the wooden forend and oval iron patchbox that would typify the later M-1817 rifle. The M-1814 incorporated some very new features for a US rifle that had not previously been seen on American made military rifles. These included the use of barrel bands to retain the barrel, the use of sling swivels and the use of a detachable brass flash pan. These were all key features in Wickham’s new design.

The US M-1814 Rifle offered here is in FINE+ condition. The gun is 100% complete and correct and in its original flintlock configuration. The rifle is well marked throughout, both on the metal and wood. The top flat of the barrel is clearly marked in two lines: H. DERINGER / PHILADA. The lock plate is marked forward of the hammer in three horizontal lines: U.S. / H. DERINGER / PHILDA, although part of the markings hidden by the frizzen spring. The left breech flat is marked with George Flegel’s inspectors F, as well as a P firing proof and the surcharge US. The stock flat opposite the lock is crisply marked V / GF, the viewing (inspection) mark of George Flegel of Schuylkill Arsenal in Philadelphia. The gun bears the assembly number 3 stamped deeply into nearly all of the metal parts. In some cases this stamp is so deep as to be difficult to read because it is not clear. The assembly mark appears inside the patchbox door, on the bottom of the breech plug, inside all three barrel bands, on the necks of the lock mounting screw and tang screw, on the bottom of the frizzen, on the top of the top jaw, and on practically every component inside the lock, including the lock plate, pan, tumbler and bridle. It probably appears on other interior lock parts and can only be seen by complete disassembly of the lock. The gun has a mostly smooth brownish-gray patina over most of the iron components, some of which is oxidized age discoloration and some of which is old dried oil and grease. The metal is mostly smooth throughout and is very crisp fine edges and marks. There is some very light pitting around the breech area. The balance of the metal shows only some scattered light peppering and pinpricking. The rifle retains both original sling swivels, as well as the original full-length ramrod. The rod retains its threads at the end and is inspected with a large serif P on the brass tip. The original brass blade front sight is dovetailed into the top of the barrel, near the muzzle and the original rear sight sits in its dovetail near the breech. The gun is in its original and correct flintlock configuration, and all parts appear to be completely original to the rifle. The frizzen functions correctly and frizzen spring remains strong. The angled brass flash pan shows some minor erosion and a lovely dark umber patina, mixed with old powder fouling and some green verdigris. The touchhole appears unmolested, with the expected erosion around the edge. The touchhole is well centered in the pan and appears correct in every way. The interior of the lock shows that all components are correct and original. The lock remains tight with a very strong mainspring. The lock is mechanically excellent and functions perfectly on all positions. A very old amber flint is in the jaws of the hammer, complete with an old piece of leather to cushion it. The bore of the rifle retains very fine and deep rifling, but is dark and dirty and is lightly to moderately pitted along its entire length. A good scrubbing might improve the bore somewhat. The oval iron patchbox has a brownish gray patina that matches the balance of the gun. As is often the case it is somewhat difficult to open, without using a thin metal object to depress the catch. The stock of the rifle rates about VERY FINE and remains crisp and sharp throughout with fine lines. The rifle exhibits fine wood to metal fit. The stock is full length with no splices, breaks or repairs. It retains a well-defined cheek rest and sharp markings in the wood. The stock does show some light scattered handling marks, as well as some minor bumps and dings, but nothing significant. The stock has developed a very smooth, burnished appearance in the handling areas of the forend, almost list a banister that has had thousands of hands rub it over the years. The only detraction worth mentioning at all is a tiny, stress grain crack that runs from the rear lock mounting screw to the barrel channel. This is typically the result of the lock screw being over-tightened.

Overall this is a really outstanding, 100% complete and correct example of a very scarce and very desirable US martial flintlock rifle. With only 2,000 of the Deringer contract rifles produced (at the most “ Robert Reilly felt that only a few hundred were actually delivered), these rifles are rarely found for sale on the collector market. When the guns are found, they usually in very rough shape, percussion conversions or even worse, percussion guns reconverted to flint. Finding one of these scarce guns in original flint, with the correct original ramrod and all of the correct, original small parts (like sling swivels) does not happen very often. This gun looks fantastic and displays wonderfully. This is one of the best US martial long arms that I have ever had the pleasure to offer and it is a truly rare opportunity for a very advanced collector to acquire a fantastic M-1814 Flintlock Rifle. For any collector of early US martial long arms, this is gun that is probably missing from their collection, and the chance to purchase one again may not happen any time soon. This is a really wonderful example of an extremely scarce rifle that will simply look great hanging on your wall.