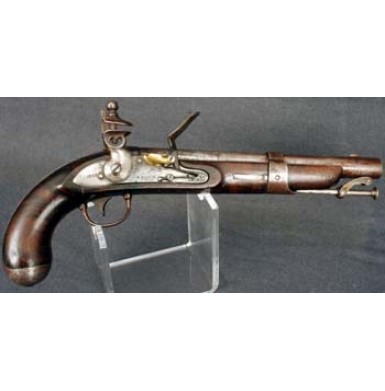 It is interesting to note that the US Government never really entered the business of producing handguns at the various National Armories until the 20th Century. While Harper’s Ferry did produce a few flintlock pistols early in their production history (1806-1808), and Springfield Armory did dabble in the production of handguns with the M-1817 flintlock pistol (which were never actually issued) and the US M-1855 pistol carbine, neither armory ever truly attempted to fill the nation’s need for pistols. With these minor exceptions, the US government relied almost exclusively on private arms manufacturing firms to fill that void during the 19th Century. From the first regulation US M-1799 flintlock pistol through the US M-1826 Flintlock Naval Pistol only the firm of Simeon North of Middleton, CT was contracted to provide handguns to the US military. Simeon North entered into contracts with the US Government to provide 500 pairs of M-1826 Naval Pistols on three different dates. These were November 16, 1826, December 12, 1827 and February 18, 1829. The pistols were priced at $7.00 each and were to be delivered to the US Navy Yard in Brooklyn, New York. All 3000 of the pistols were delivered over a seven-month period, between the dates of June 30. 1828 and February 18, 1829. It is interesting to note that only the dates 1827 and 1828 have been documented on any of these pistols. These would be the last pistols produced by North for the US Government, and with the completion of the contract, North concentrated on the production of carbines and Hall rifles.

Offered here is one of those rarely encountered Simeon North US M-1826 Flintlock Naval Pistols. The majority of the extant examples encountered today have been converted to percussion, and even Flayderman’s refers to original flintlock M-1826 pistols as extremely scarce, and Robert Reilly notes in United States Military Small Arms 1816-1865 that flintlock specimens are seldom encountered. In fact these guns are so rare in original flint that Flayderman’s assigns a value of $3,750 to those in only “good” condition (while those in “fine” condition are valued at $10,000). This gun is in original flint and has not been reconverted. Were it not for a crack in the stock, the gun would easily qualify as Very Good+ to Fine in overall condition. However, due to the crack (that I will discuss later) the gun rates about good overall. All of the markings are sharp and clear and the gun is very well marked throughout. The lock plate is marked horizontally 1828 to the rear of the hammer, and in two horizontal lines forward of the hammer: U.S. / S. NORTH. The breech is marked in three lines with US / AH / (circle) P. The P proof mark is in a depressed rosette. The inspector initials AH are those of Asabel Hubbard who was a Springfield Armory armorer and contract arms inspector. The gun retains the original button-head captive swivel ramrod, the original brass blade front site and the original tang mounted rear site. The original naval belt hook remains in place on the left side of the gun as well. All of the flintlock battery, including the cock, steel (frizzen), etc all appear to be original to the gun. The only exception is the frizzen screw, which may be a more recent replacement. Inside the lock, the parts are numbered together. When the lock is removed from the gun it functions correctly, although the sear is slightly worn and the lock is not crisp at full cock. However, when the lock is installed in the gun the hammer will not catch on full cock and the half cock is not positive. I feel that this functional issue is more likely a result of the minor change in geometry due to the stock crack, which may be putting pressure on the sear lever, keeping the gun from maintaining full cock. This problem only appears when the lock mounting screws are tightened completely, as the lock functions correctly when it is first installed in the gun as well. The brass pan shows wonderful residue and old wear in the bottom and the touchhole is completely unmolested and shows wonderful erosion. The .54 caliber smooth bore barrel is dark and dirty with scattered pitting throughout. The barrel and iron furniture has wonderful smooth gray-brown throughout with only some very light scattered peppering and pinpricking. The stock is a lovely piece of well figured walnut, with a fine and crisp ET (Elisha Tobey) inspectors cartouche on the flat opposite the lock. The edges remain sharp and the stock has not been sanded or refinished. However, there are some structural issues with the wood. There is a small piece of wood forward of the barrel band on the left side of the gun that cracked and broke free, which was professionally repaired at some point. The repair is so skillfully executed that it is nearly invisible and does not detract from the pistol at all. The real condition issue is a major structural grain crack that runs from just above the tail of the lock plate on the right side of the gun, through the lock mortise and out underneath the lockplate through to the trigger guard and around to the other side of the grip/stock to the opposing flat. The crack is stable and does not appear to be showing any movement, however it is visible and is worthy of attention. A professional wood restoration specialist should probably stabilize (repair) the crack so that it does not become worse over time. This one issue is what keeps the gun from being a nearly fine condition pistol and the gun has been priced with this issue in mind. Thankfully, the stock has such a lovely grain that the crack is not horribly ugly and does not drastically impact the display on this otherwise fine and rare pistol. There is also a very small, minor crack running from the forward lock mounting screw to the barrel channel; an old crack from screw having been over tightened.

Overall, were this gun pistol void of the crack I would be more than comfortable pricing it in the $7,000.00 range. With the crack repaired by a talented professional, I feel it would easily bring $5,000+. The gun is an otherwise a nearly fine example of a rare pistol that is seldom found in its original flintlock configuration. Even if the repair of the stock were to cost $500, I truly feel that the value of the piece would be enhanced by three to four times that amount. I am proud to offer such a wonderful displaying example of a rare US martial flintlock pistol at a price that they are rarely encountered at unless they are in rather rough condition.