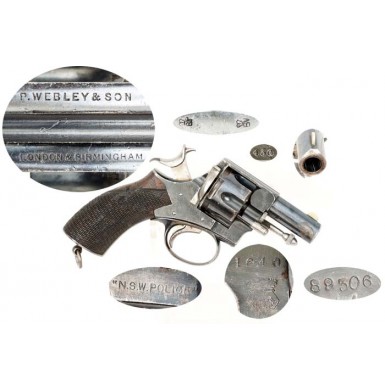 “In demonstrating to his police pupils the manner in which the revolver ought to be used, Mr. Webley fired five shots at nine yards at a target having a bull’s eye 2” in diameter. The result was that the bullet’s lodged in a space 2 ““ by 1 “. Then the range was increased to 15 yards and five shots were fired at a similar target - the bullets in this case being put into a space of 2 ““ by 1 “. The next move was made to a distance of 25 yards from the target and at this range five shots were fired by Mr. Webley. The same undeviating accuracy was maintained “ a surface of 2 ““ by 3 ““ was riddled. Having witnessed the expertness of their instructor, the police sergeants had a little practice themselves and soon satisfied Mr. Webley of their ability to make use of their weapons at long and short distances.”

Two things immediately stand out in this story: #1 “ Henry Webley was one heck of a good shot! #2 “ Only the London police sergeants, not the average patrolmen, were being trained to use the revolvers. Based upon the above account, it seems quite possible that the various shooting feats that Arthur Conan Doyle attributed to his character Sherlock Holmes (who carried a Webley Metropolitan Police revolver), were quite possible! The quality, durability and accuracy of the R.I.C. design meant that many of their Metropolitan Police revolvers remained in use well into the 20th century, and in some cases were not sold out of service until the 1950s!

Offered here is a VERY FINE condition example of a Webley 1883 R.I.C. New Model No 1 “Metropolitan Police” Revolver that is marked to the New South Wales police force in Australia. This is likely one of the guns that was sold as surplus by the force in 1953. As revolvers saw limited use by the rank and file and were typically only issued to sergeants, detectives and special division officers, finding any Australian police marked R.I.C. in somewhat uncommon. The topstrap of the revolver is clearly marked: P. WEBLEY & SON on one side and LONDON & BIRMINGHAM on the other. The left side of the frame is marked with the manacled hands logo with WEBLEY’s above it and M P below it. The ownership mark “N.S.W. POLICE” is present below the logo and New South Wales police inventory number 1640 is above the logo. The right side of the frame is marked with the serial number 89306. The bottom of the barrel (concealed by the cylinder arbor pin) is marked with the last two digits of the serial number 06 and inside lip of the loading gate and the cylinder arbor pin are both marked with the last number, 6. The left side of the barrel to frame juncture is marked .450. The gun is 100% original and correct in every way. The gun retains about 75%+ of its original bright blued finish overall, some of which has faded, thinned, dulled and worn. The gun shows fading and wear from carry along the sharp edges, at the muzzle, the topstrap and a few places on the frame. A thumb sized areas of finish is missing from the right side of the barrel near the muzzle, and there is some finish loss on the left side of the frame where “N.S.W. Police” is stamped. There is also some finish loss on the butt cap where the lanyard ring has worn away the blue. The triggerguard and gripstrap show significant loss of blue due to carry and wear. The gun is smooth with no pitting present but it does show some lightly scattered flecks of pinpricking around the muzzle, and on the frame forward of the cylinder. There are also some lightly scattered flecks of minor surface oxidation present forward of the cylinder chamber mouths and on the barrel. A pair of Birmingham commercial proof marks are present on the left upper angled barrel flat. The cylinder also bears the usual Birmingham commercial proof marks at the rear of each flute. The hammer, trigger, loading gate and ejector rod are correctly finished in the white and retain the large majority of their original polish. Both the trigger and interior of the triggerguard show some scattered flecks of minor surface oxidation. The revolver is mechanically EXCELLENT and functions perfectly in every way. The revolver times and indexes correctly and locks up quite tightly. The action functions crisply in both single and double action modes, and the loading gate closes tightly and securely as it should. The bore of the revolver rates VERY FINE and remains mostly bright with very crisp 6-groove Metford patent rifling its entire length. The bore shows only a few patches of lightly scattered pitting along its length and some light frosting in the narrow grooves. The original lanyard ring is in place in the butt of the revolver and moves smoothly and easily. The original half-moon, German silver front sight is in place on the top of the barrel near the muzzle and is in fine condition. The one-piece checkered walnut grip remains in VERY GOOD condition. The grip is solid and complete and free of any breaks, cracks or repairs. The checkering shows some minor wear and flattening to some of the points, and also shows the bumps, dings and minor mars typical of police used revolver that was primarily carried concealed.

Overall this is a really wonderful example of a very desirable late 19th century Webley 1883 R.I.C. New Model No 1 “Metropolitan Police” Revolver in VERY FINE condition. These workhorse revolvers did yeoman’s duty with the Commonwealth police forces of the late 19th century and saw use well into the 20th. These ubiquitous handguns made them the perfect choice for the revolver carried by Conan Doyle’s Sherlock Holmes, and they are certainly a classic and historical law enforcement weapon. Any “Metropolitan Police” revolver that actually bears police markings is a scarce and desirable gun, and it is certainly difficult to find them in this condition, as constant concealed carry tended to be hard on the finish. This is wonderful example of a very scarce and desirable New South Wales police marked Model 1883 R.I.C. New Model No 1 Metropolitan Police revolver that you will certainly be very proud to own and display and to add to your collection of fine 19th century revolvers.