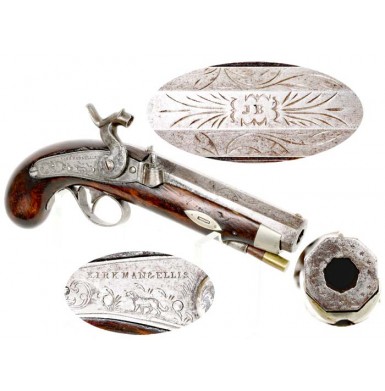 The pistols that bear the mark of Nashville, Tennessee hardware retailers (and later wholesalers) Kirkman and Ellis are a true conundrum that continues to confound collectors of southern retailer marked derringers and pocket pistols. To this day, it is not clear if these scarce guns were assembled by local makers using Kirkman & Ellis marked parts, or if they were made by other makers for Kirkman & Ellis to retail in their shop; thus bearing their mark.

The firm of Kirkman & Ellis appears to have been organized sometime in 1848. Although no Nashville business directory was published prior to 1853, an October 16, 1848 ad for the firm has been located in the Nashville based newspaper The Tennessean, a paper which is still published to this day. A notation at the bottom of the ad suggests it was first run on February 7 of that year. The company was a partnership between John Kirkman and James Ellis, located at 34 Public Square. John had previously operated a hardware store in the same location with his brother Hugh, under the name of H & J Kirkman. Some references list the firm as H & I Kirkman, with some debate regarding whether the “I” was a reference to John’s middle name Ian. The Kirkman brothers were the youngest of two of four sons of Irish immigrant Thomas Kirkman, who had established a successful hardware, dry goods and storehouse business in Nashville circa 1809. By the time of his death in 1826 Thomas Kirkman was worth in excess of $100,000; more than $2.5 Million dollars in today’s currency. After settling the estate, the older brothers Thomas Jr. and James moved to Florence, AL and opened a successful hardware business there, while the younger brothers opened H & J Kirkman. By 1848, brother Hugh was no longer involved in the business and John had taken on James Ellis as a partner. The 1848 advertisement notes that the partners were “Importers of Hardware & Cutlery” and lists among the wares regularly in stock: “Collin’s Axes, Hunt’s Axes, Beaty’s Axes, Rifle Barrels, Gun Locks, Shot Guns, Smith’s Bellows, Anvils and Vices” The ad concludes by stating that in addition to the specific items listed they also stocked “A large assortment of everything in the Hardware line, which they will sell at very low prices.”. Through 1851, no ads ever list any type of complete firearm for sale other than “shot guns”. In 1851, the listing of gun related hardware in the Kirkman & Ellis ads is substantially increased, listing such items as “nipples, cocks, main springs, sheet brass, double triggers and bullet moulds, gun wipers & guards, sheet German silver.” Again, the only complete firearms listed for sale are shotguns, listed as “Double Barrel Guns”. An 1853 advertisement expands the listing of firearms further by listing “A large quantity of Double and Single-Barrel Shot Guns, and Rifles at unusually low prices” but does not list handguns. At least one example of a Kirkman & Ellis marked rifle is known, which is also marked by Nashville gunmaker Franz Bitterlich. The lock is Kirkman & Ellis marked while the barrel is Bitterlich marked. It is not clear if Bitterlich made the gun with a Kirkman & Ellis lock, or if another gunmaker made the gun using components from both Bitterlich and Kirkman & Ellis.

Kirkman & Ellis marked pistols are known, although they are quite rare. An early example, carried by one of Brigham Young’s bodyguards is marked John Kirkman / Nashville. The handful of other know examples all follow the same general construction and appearance, but it is not clear if these guns were simply built locally using Kirkman & Ellis marked locks, or if they were built for sale by Kirkman & Ellis. The theory that they were imported guns, retailed by the firm like their shotguns is completely unsubstantiated. I know of no examples of Kirkman & Ellis pistols that have either English or Belgian proof marks, which would be present on imported guns (or barrels) from either country. One theory also suggests that the guns may have been produced by Nashville gunmakers James or John Burlington, as at least one example is known with the initials JB on the barrel flat. James Burlington is listed by Frank Sellers in American Gunsmiths as working in Nashville circa 1853 with John working there circa 1855-1860. However, no additional evidence that I am aware of exists to support this theory.

By 1857 Kirkman & Ellis had left the retail hardware business and had taken on a wholesale only business model. By the fall of the following year the company was advertising that the firms books were “at the counting room of McCall, Vanleer & Co”.as our business must be settled without delay.” By the end of 1858 Kirkman & Ellis was no longer a solvent entity. Their premises were taken over by M’Call & Co, a partnership of A.W. M’Call and W.F. Fall (previously of Fall & Cunningham; a primary competitor of Kirkman & Ellis). John Kirkman went on to form a new hardware and dry good partnership: Gray, Kirkman & Company. In addition to his position in the hardware and dry goods business, Kirkman had a very successful career in banking. He was president of the Union Bank of Nashville prior to and during the Civil War era and later was president of the Third National Bank. He also served as president of the Commercial Insurance Company in Nashville. John Kirkman was killed in a runaway carriage accident on August 1, 1888 at the age of 75.

Offered here is one of the extremely scarce Kirkman & Ellis marked percussion pocket pistols that is rarely found for sale. Based upon the working period of the firm, the gun certainly dates to between 1848 and 1857. This gun was previously in the of Dr. G.W. Huckaba, later in the collection of John Montague and is pictured on page 193 of The Deringer in America by R.L. Wilson and L.D. Eberhart. The pistol is approximately 7 ““ in overall length, with a 4 5/8” octagonal barrel, that measures 3 1/8” to the breech and 3/8” across the flats. The iron barrel is secured to the pistol via a single wedge and a screw through the breech plug tang. The bore is rifled with seven grooves, measuring about .38 caliber land-to-land and about .40 groove-to-groove. The flat muzzle face is marked with sixteen small five-pointed stars that resemble asterisks, a type of decoration common to “Kentucky” rifles and pistols of the late 18th through latter part of the mid-19th century. A small brass blade front sight is dovetailed into the top of the barrel near the muzzle with a small notched rear sight present at the rear of the breech. The barrel is engraved on the top flat with the initials J B, surround with simple flowing scrolls. Simple engraved decorative lines are present at the breech, on the tang and on the tang screw. The mountings are iron, with the exception of the ““ long nose cap and the wedge escutcheons, which are of German silver. The mountings are not decorated in any way. The 3” back action lock is clearly marked in a single line: KIRKMAN & ELLIS over an engraved game scene with a dog, with some simple foliate scrolls engraved at the lock’s tail and with some additional simple lines decorating the lock. The hammer is engraved with the same style of simple foliate scrolls. The interior of the lock is assembly numbered with the number 1 on the lock plate and the tumbler. The lock was not completely disassembled, so other parts may be marked as well. The pistol remains in about VERY GOOD condition. The metal was lightly cleaned long ago and has toned down to a smoky pewter gray patina. The metal shows scattered oxidized age discoloration and some light pinpricking, as well as some areas of light pitting; particularly around the muzzle, breech and bolster areas. The bore rates about NEAR VERY GOOD and retains strong rifling but is dark and dirty with light to moderate pitting along its entire length. A good scrubbing would likely improve the bore. The lock functions crisply and correctly on all positions and the pistol is in FINE mechanical condition. The walnut stock is in about NEAR VERY GOOD condition. It is solid and full-length, but as is often the case with derringer style pocket pistols that often spent their working lives being carried in a pocket, the wood shows wear and some minor repairs. There is some repair and a small amount of replaced wood behind the bolster, most of which is concealed by the hammer. There is also a small surface grain crack running from the rear of the lock plate towards the triggerguard. A similar, short surface grain crack is present at the rear of the ramrod entry pipe as well. There are also a couple of very tiny chips of wood missing, one along the obverse forend and one forward of the gripstrap tang. The stock has been lightly sanded and has had some finish added. As would be expected it also shows some lightly scattered bumps, dings and minor mars. The pistol is accompanied by an old brass tipped wood ramrod that appears to be period, and that measures 4 1/16” in length. The rod appears to be a replacement as it is a little narrow to stay in the rammer channel from friction and has a small piece of clear tape wrapped around its shaft to make it fit more tightly.

Overall this is a very nice looking and nice displaying example of an extremely scarce Nashville, TN retailer marked derringer style percussion pocket pistol from the Antebellum period. Nashville made, marked or retailed guns from the pre-Civil War period are quite scarce and very desirable pieces. This example is also published in the best work on the subject, The Deringer in America by Wilson & Eberhart. This is a great chance to own a very solid example of a Nashville pocket pistol for a very reasonable price.