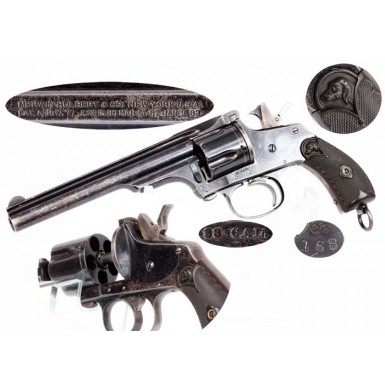 Offered here is an VERY FINE condition example of a Merwin, Hulbert & Company “Automatic” 38 Caliber Double Action Revolver with the extremely rare factory blued finish. These medium frame double action revolvers were introduced in 1879 or 1880 and remained in production through the late 1880’s and probably until the company’s demise around 1892. As with all Merwin & Hulbert revolvers, it is not clear exactly how many were produced, due to an erratic serial numbering system and an 1891 fire that destroyed all of Merwin, Hulbert & Company records. It is believed that only a few thousand of these revolvers were produced, but probably more than of its larger brother the Pocket Army. The term “automatic” in the official Merwin & Hulbert product name for the revolver refers to the automatic extraction mechanism, that same as found on the larger “Frontier Army” models. In fact, Merwin & Hulbert used the term to describe all of its automatic extraction revolvers. The medium frame, 5-shot .38 (or 7-shot .32) were both chambered for the proprietary Merwin & Hulbert calibers of .38 Merwin & Hulbert and .32 Merwin & Hulbert. For all practical purposes, there was little difference between .38 M&H and .38 Short Colt or .38 S&W Short, nor was there a reasonable difference between the .32 M&H and .32 Short Colt or .38 S&W Short, and the ammunition appears to have been used somewhat interchangeably during the 1880’s and 1890’s, with any of the .38s or .32s having been used in a gun of that caliber. The guns were available with 5 “, 3 ““ and 2 ““ barrels, as well as with multi-barrel sets. This factory blued Merwin, Hulbert & Company DA “Automatic” .38 has the long and desirable 5 ““ barrel, is chambered for .38 M&H, has a lanyard ring on the bottom of the square butt, and has a folding hammer spur. The gun has the early production era hard rubber grips with a dog's head motif at the top of the grip. The top of the 5 ““ ribbed round barrel is marked in two lines: MERWIN HULBERT & CO. NEW YORK U.S.A. / PAT. APR. 17, 77. JUNE 15, 80. MAR. 14, 82. JAN. 9, 83.. The there are very few other markings on the gun. The left side of the frame, below the cylinder, is marked in a single line: 38 CAL.. The bottom of the butt is marked with the assembly number 25 / 186. While this is typically where you expect to find the serial number, on some Merwin & Hulbert revolvers this is the assembly number, and the serial number is concealed by the grips. On this revolver, the matching assembly number 25 / 168 appears on the rear of the cylinder and on the rear of the barrel web. The serial number 6368 is located on the left grip frame, under the grip panel. The folding hammer spur is marked: Pat’d / Jan. 27, 85. Overall, the revolver retains about 70%+ of its original blued finish. There is the expected wear and loss around the muzzle, grip strap and the butt where the assembly number is struck. There is also fading and loss along the contact points and high edges, suggesting significant holster or pocket carry during the days of its use. The areas where the blue has faded and worn has developed a lightly oxidized plum-brown patina that blends well with the original blue. The overall condition of the revolver and its significant amount of original finish is well depicted by the photos below. The bore of the revolver rates about GOOD+. It is somewhat dark and dirty with rifling and light to moderate scattered pitting along its entire length. The folding hammer retains about 70%+ vivid case hardened colors, with some minor fading and light edge wear noted. The trigger retains about 40% of its case coloring as well, which is most evident on the wider web at the rear of the trigger. Most of the color on the trigger has faded and is muted. The revolver is in good mechanical condition and functions correctly in both single and double action modes about 80% of the time. Sometimes, the trigger appears to fail to reset properly, resulting in the hammer and cylinder not responding to its pull. This suggests that that there is some old grease or oil impeding the reset of the trigger. Otherwise, the revolver cycles, indexes, times and locks up perfectly, when it cycles. The frame locking system of the revolver works flawlessly, with the forward portion of the frame, barrel and the cylinder unlocking, rotating and sliding smoothly forward as they should. The medium frame revolver mechanisms are not known for having the “suction” of the large frame mechanism, and none is noted in this example. The mechanism locks the gun up securely, exactly as it should. All of the screws remain crisp and sharp with practically no slot wear. The innovative sliding loading gate functions smoothly and opens and closes exactly as it should. The two-piece, hard rubber grips are in equally wonderful condition, rating about NEAR EXCELLENT condition, with no breaks, chips or repairs noted. The grips show only the most minor wear and lightly handling marks. The grips are from the early production era of the DA Automatic revolvers, and are identified as such by the presence of a dog's head motif at the top of the grip panels. Later production revolvers had either plain circles or geometric designs in circles in this location. The condition and state of preservation of this Merwin, Hulbert & Company “Automatic” 38 Caliber Double Action Revolver is really nice.

Overall this is a really VERY FINE condition example of the Merwin, Hulbert & Company “Automatic” 38 Caliber Double Action Revolver. The gun is very attractive, with a wonderful factory blued finish and outstanding condition hard rubber grips. Over the last two to three decades, the guns of Merwin & Hulbert have really come into their own and have finally achieved a notable place in realm of historic and collectible firearms. Today’s collectors appreciate the quality craftsmanship and mechanical engineering of what quite possibly were the finest made revolvers of the late 19th century. As a result, Merwin, Hulbert & Company prices have climbed steadily over the last few years and are continuing to increase. The desirability for high condition examples, oddities and factory engraved specimens have driven the prices for those guns at an even greater rate. This has resulted in rare Merwin, Hulbert & Company guns (like engraved or blued ones) selling for as much as 3 to 4 times the price of a comparable condition revolver without the factory enhancements. This is a really attractive example of a factory blued Merwin, Hulbert & Company “Automatic” 38 Caliber Double Action Revolver, in a great state of preservation, and at a very reasonable price. This gun will be a wonderful addition to any collection of Merwin, Hulbert & Company revolvers, revolvers of the old west, or potentially as a long-term investment as these revolvers continue to increase in value, especially the rarer variations.