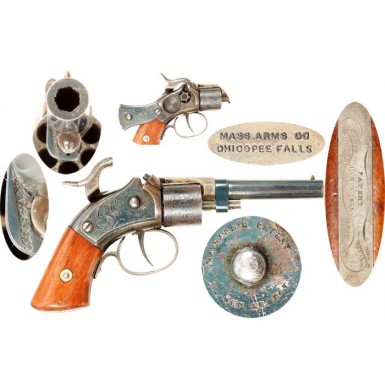 The Massachusetts Arms Company of Chicopee, MA was one of the most important of the mid-19th century gunmaking companies to be established, not necessarily because of what the firm produced, but who the firm produced and supported. The company was established in 1850 to essentially serve as the firearms making arm of the famous Ames Manufacturing Company, although this was not widely advertised. The company was founded with Ames money, was located in an Ames owned factory building, and had a board of directors that was controlled by Ames and listed J.T. Ames as one of the incorporators. Other earlier incorporators who would go on to great prominence in the field of American firearms manufacturing were Horace Smith and Daniel Wesson (who would eventually form Smith & Wesson) and Joshua Stevens who would form the J. Stevens Arms Company. The initial offering from the Massachusetts Arms Company was a large frame “Dragoon” revolver designed by Edwin Wesson, brother of Daniel Wesson, which was introduced in 1850. A scaled down, .31 caliber “Belt” model was quickly added to the product line, in addition to the .40 caliber “Dragoon” later that year. The following year Samuel Colt sued the Massachusetts Arms Company for infringement upon his revolving pistol patent, and brought the production of the single action percussion revolver to a halt. In an attempt to circumvent the Colt patent, the revolver line was redesigned to have the cylinders rotated manually, and to include the Maynard patent automatic tape priming system. It was hope that the “innovation” of automatic priming would create public interest in the guns, and that the eliminate of individual cones (nipples) on the cylinder that required percussion caps for ignition, along with manual cylinder rotation, would help evade any more legal trouble with Colt. The newly designed revolver line debuted in 1851 and included a .31 “Belt” sized revolver and a “Pocket” sized revolver available in .28 or .31 caliber. The guns were quite streamlined, and retained the overall look of the earlier Edwin Wesson design with a hinged barrel that was easily removable from the frame, allowing barrels and lengths to be easily swapped. This same feature would later be an important selling point when the Massachusetts Arms Company added the 1st Model Maynard carbines and rifles to their product line, whose interchangeable barrels allowed a single receiver to be used for a rifle, carbine or shotgun, in various calibers. With the expiration of the Colt revolver patent in 1857, the Massachusetts Arms Company redesigned their Maynard primed revolvers to rotate the cylinder automatically when the hammer was cocked. However, they also started to produce a .36 large frame and a .31 caliber small frame revolver based upon the M-1854 Beaumont Adams revolver, under a license agreement from Adams. The production of the tape-primed revolvers started to slow down, with the addition of the new double action, solid frame percussion revolvers to the product line, and by 1860 the tape-primed guns were dropped from the production. A total of about 2,500 tape primed pocket revolvers were produced between 1851 and 1860, while some 4,500 of the pocket sized Adams revolvers were produced between 1857 and 1861. Of the tape-primed revolvers, about 900 or so were of the earlier, manually rotated variant, with the balance being the more conventional automatically rotated version. The diminutive revolvers were typically manufactured with 2 ““ or 3 ““ round barrels, although a number of scarce variations like other barrel lengths and octagon barrels have been noted. The guns were not serial numbered, but were rather batch numbered (assembly numbered) on most of the major components, making it difficult to determine exact production figures.

This is an EXCELLENT condition example of an Automatically Revolved Massachusetts Arms Company Maynard Primed Pocket Revolver. The gun was produced after 1857 or later because it has the rotating cylinder lock work that was initially covered by Samuel Colt’s patent, and no later than 1860. The revolver is .28 and is an extreme rarity in that it has a special order 3” round barrel, rather than the standard 2 ““ or 3 ““ barrel. The top strap of the barrel is clearly marked in two lines: MASS. ARMS CO / CHICOPEE FALLS. The tape primer door is clearly marked in a circle: MAYNARD’s PATENT / SEP. 22, 1845, and the face of the barrel catch is marked PAT. NOV. 26, 1850. The backstrap of the revolver is marked in two lines: PATENET / JANUARY 2, 1855. The backstrap has light scroll engraving around this patent mark and loose foliate scroll engraving is present on the left side of the frame and on the exterior of the tape primer door. The gun is assembly numbered 119 throughout, with the exception of the barrel, which is numbered 311 on the bottom of the topstrap. Much like a 1st Model Maynard Carbine, it is not unusual for the frame and barrel to be mismatched on Massachusetts Arms revolvers, since the barrels were easily swapped for special orders or the whim of the customer. The condition of the barrel, when compared to the balance of the gun, is such that there is no question in my mind that they have been together since they left the factory. The “frame” assembly number 119 appears on the frame (concealed by the primer door), inside the primer door, on the frame under the grips and on the interior of both grips. The gun retains about 80%+ of its original finish overall, with the barrel retaining at east 90% of its high luster blue, a delicate finish that typically flakes easily, making high condition Massachusetts Arms Revolvers very difficult to find. The highly reflective blue is more akin to the brilliant fire blued finish found on the small parts and screws of Colt revolvers of the era, and is typically indicative of high niter content in the bluing process. The majority of the finish loss on the barrel is at the muzzle and along the points of contact and handling, where it has thinned and worn slightly. The top strap retains about 85% original case hardening, which is slightly dull and is not as vivid as high condition Colt case coloring. It does retain some good dark blue mottling and has a nice brownish-gray base color. The tape primer door retains about 60% of its original blue, with most of the loss due to handling and operation with some minor scattered surface scratches present as well. The balance of the frame retains about 30% of its original blue, with the balance of the surfaces retaining a dull pewter-gray and brownish patina with plum undertones that blend well with the remaining finish. The hammer retains about 70% of its original case coloring with some dulling and fading, mostly along the top of the hammer, the spur and the nose. The balance of the hammer retains some nice mottle coloration. The acid etched cylinder retains about 90%+ of its floral scene and panoply’s of arms. The cylinder retains about 45%+ of its original brilliant blue finish as well. The gun is mechanically EXCELLENT and is 100% fully functional. The Maynard priming system is complete and fully functional, and the cylinder, rotates, indexes and times exactly as it should, with a crisp action and tight lock up. The metal of the gun is free of any pitting and shows barely any pinpricking. There are some tiny areas of lightly oxidized freckling scattered throughout the gun, and some tiny patches of minor surface oxidation in the nooks and crannies around the rear of the cylinder and the topstrap. The bore of the revolver is in EXCELLENT condition and remains bright with crisp rifling and only some light frosting along the grooves. The original two piece wood grips are in FINE condition, and retain about 90% of their original varnish. The grips are solid, complete and free of any breaks, cracks or repairs. They do, however, show a number of minor bumps, dings and handling marks, the worst of which are some small impact marks on the bottom of the grips and grip straps. It appears that in 19th century America nearly every revolver, no matter its size, was considered to be an ersatz hammer at some point in its life! Other than these handling marks and minor dings, the grips remain in very nice condition.

Overall this is really wonderful example of a 100% complete, correct and original Massachusetts Arms Company Tape Primed Pocket Revolver with the automatic rotation mechanism. The gun is in a simply wonderful state of preservation with wonderful brilliant blue on most of its surfaces and the delicate action remains mechanically perfect. The gun has a very scarce 3” barrel, making it a rarity within the small number of about 1,500 that were produced. This is a revolver that deserves place in a very advance collection of American pocket revolvers from the mid-19th century or antebellum era. This lovely little gun could be a centerpiece all by itself and will certainly enhance a collection of wonderful, diminutive American percussion revolvers.