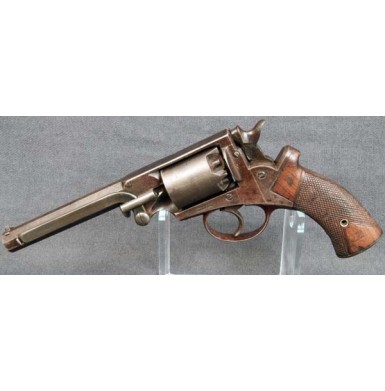 The story of the Adams Patent Revolvers as produced by the Massachusetts Arms Company is a very interesting one. Robert Adam’s “self cocking” or “double action” revolver was originally patented in England in 1851, with the primary patent covering his one piece, solid frame and barrel forging. The frame was considerably stronger than the open top, two-piece, wedge retained frame and barrel system used by Colt. Adams instantly found success selling his guns in England, and in 1854 Lt. F.B.E. Beaumont developed an improvement to the lock work, which allowed the pistol to operate in both conventional single action and double action modes. It was this variation of the Adams revolver (the M-1854 or “Beaumont-Adams”) that was produced under contract by the Massachusetts Arms Company of Chicopee Falls, MA. In 1857 Massachusetts Arms entered into an agreement to provide 500 of the “belt” sized (.36 caliber), Beaumont-Adams Patent revolvers to the US Ordnance Department. Ordnance Department Head Colonel H.K. Craig had purchased 100 of the English made Beaumont-Adams revolvers the previous year, in .36 caliber, since it was the caliber of the Colt revolvers (M-1851 “Navy” revolvers) most in use by the US military at that time. After issue and use in the field during 1856, Craig wrote to the Secretary of War “I think very favourably (sic) of the arm”.as being well adapted to Military use, and as the price is considerably less than”.the Colt Pistol, to which it is quite equal and, in some respects, in my opinion superior.” Craig was no doubt referring to the robust solid frame of the guns, when calling them “superior” to the Colt. On July 24, 1858 The Massachusetts Arms Company delivered the first 250 of the Beaumont-Adams revolvers to the Ordnance Department, and delivered another 150 on August 17 and the last 100 on September 4 of the same year. Massachusetts Arms saw only limited civilian sales of the revolvers during that period, and it is believed that the highest serial number delivered to the US Ordnance Department was 609, indicating that 100 or so were manufactured for private sale during that period, or rejected by the Ordnance Department. While total Mass Arms production of the revolvers is estimated at 1,000 (500 to the Ordnance Department and the rest for commercial sales), in reality at least 1,500 must have been produced, as the State of Virginia purchased 1,000 “Deane & Adams’ pistols and the same number of cavalry sabers from the Ames Manufacturing Company (also of Chicopee Falls, MA) in May of 1860. These guns were apparently delivered from Massachusetts Arms Company stock on hand. According to noted Adams revolver researchers W.H.J. Chamberlain & A.W.F. Taylerson, some of the guns delivered to Virginia were some of the guns from the original US Ordnance Department order that had been sub-inspected, but never officially “received” by the Master Armorer at Springfield. All US received Adams revolvers would show the sub-inspector’s cartouche of either William Anderson Thornton (WAT) or Josiah Tatnal (JT) on the left grip and the receiving Master Armorer’s cartouche of Lucias C. Allin (LCA) on the right grip. Those guns not bearing the cartouche on right grip are believed to be guns that were rejected (or simply not accepted into inventory) by the Ordnance Department for some reason. While Col. Craig was very complimentary of the Adams-Beaumont revolver, it is unclear if any of the guns were issued to the US military prior to the Civil War. A total of 41 of the revolvers were sent to the State of Pennsylvania in fiscal year 1860 (August 1859 “ July 1860) under the Militia Act of 1808, and in September of 1858 another 250 of the revolvers were sent from the New York Arsenal to the Saint Louis Arsenal, where they were in storage at the outbreak of the war. One thing is sure, martially marked examples of these revolvers are very scarce and they are rarely encountered. When they are, they are often in rough condition and show heavy use. This would indicate that the guns saw significant use during the American Civil War. Other than these Mass Arms Adams revolvers, the US Government did acquire another 1,075 Adams revolvers from England during the course of the war, however, it is assumed that most of these would have been in the 54-Bore (.442 caliber) version.

The Massachusetts Arms Company Adams Patent Revolver offered here is one of the martially marked and accepted guns that was delivered to the US Ordnance Department in 1858. The gun is serial number 396, so it was most likely part of the 2nd batch delivered to the Ordnance Department on August 17, 1858. The gun is marked with a fairly legible JT (Josiah Tatnal) cartouche on the left grip panel and retains the shadow of a cartouche on the right panel, where the LCA would have been. The gun also bears the single letter sub-inspector mark A on left side of the barrel and the cylinder, and T on the left grip frame. The lower right side of the frame is marked in two horizontal lines: PATENT / JUNE 3, 1856 and the lower left side of the frame is marked with serial number 396 and ADAMS, PATENT / MAY 3, 1853. The cylinder is marked with the same serial number, followed by the previously mentioned sub-inspector A. The top strap is marked: MANUFACTURED BY / MASS. ARMS CO. / CHICOPEE FALLS. in three lines. The gun is in about VERY GOOD condition, and has a mostly smooth brown patina over all of the metal components. There are some small, scattered patches of minor pitting, as well as some light scattered peppering and pinpricking on the metal. As would be expected of a service used cavalry revolver, there are a handful of minor impact marks present on the frame, cylinder and topstrap. The hammer retains traces of the original case colored finish, and there are still signs of the fire-blued finish on the heads of many of the screws. The action of the revolver works as it should, in both the double action and single action modes. The gun times and locks up well. The original frame mounted sliding safety is present on the right side of the pistol. It retains about 50%+ of its original fire-blued finish and functions correctly. The fragile thumbscrew style cylinder pin retaining screw is long gone, and has been replaced by a conventional screw. The thumbscrew was notoriously weak and subject to breaking, and they are often missing from both English and American made Beaumont-Adams revolvers. It is difficult to know when this screw was replaced, but it matches the age and patina of the gun well, and is likely a period replacement. The “Kerr’s Patent” loading lever on the left side of the frame is a correct style replacement, likely of the period. It appears to be from an English made Adams revolver. The original loading levers on Mass Arms Adams revolvers were attached with a spanner style screw, making repair and replacement in the field very difficult. This original replacement lever is attached with a conventional slotted screw. The lever fits perfectly and functions exactly as it should. The five shot cylinder retains all of the original cones (nipples) and they are in fine condition, retaining sharp edges and much of their original blued finish. The bore of the pistol is in about VERY GOOD condition. It has a dark brown color that matches the patina of the revolver, but retains strong, sharp rifling and shows only light scattered pitting over its entire length. The original front sight is dovetailed into the top of the 6” octagon barrel, and the barrel retains sharp edges and good lines. The checkered walnut grips are in about VERY GOOD condition, and are free of any breaks, cracks or chips. The checkering shows light to moderate wear from actual use, and as noted the left cartouche remains fairly legible, while the right cartouche is only a shadow of its former self. The original brass ferrules remain at the edges of the lanyard hole that passes through the center of the grip.

Overall this is a very attractive example of a rarely encountered US Marital Revolver of the pre-Civil War and Civil War era. With a maximum of 500 of these revolvers having been accepted by the US Government, and the apparent heavy use that they saw during the course of the war, it is not common to find one for sale. Post war disposition records show that the US Ordnance Department sold a total of 264 “Adams’ revolvers as surplus between 1868 and 1901. Of those, most would likely have been English made 54 Bore revolvers purchased in 1861 & 1862. In fact 136 of the surplus guns are listed as being .44-caliber. That means that at most 128 Mass Arms Adams revolvers were sold as surplus after the war. This indicates a survival rate of only 21% - assuming that all of those guns were part of the 500 gun Mass Arms purchase. With additional losses to those guns over the following 100+ years, this clearly explains the scarcity of these revolvers on the market. While this gun is certainly not a “museum grade” example, it is a gun that saw real use and service, and is a great representative example of an American made, martially accepted Adams, which is not regularly seen on the market.