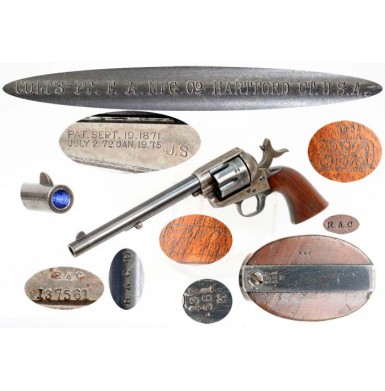 Offered here is a NEAR EXCELLENT example of a US Military 7 ““ “Cavalry” Model 1873 Single Action Army Revolver, inspected by Rinaldo A. Carr. Carr inspected a total of 4,000 Single Action Army “Cavalry” revolvers from two different government contracts during a 3-year period at Colt from 1889 to 1891. Carr actually continued inspecting Colt produced arms well into the first part of the 1900s, but his tenure inspecting newly produced 7 ““ barreled Single Actions came to an end in the spring of 1891 and all subsequent inspections of Single Action revolvers by Carr would be of refurbished arms. This gun is from the 2nd contract that Carr inspected and was part of an order of 2,000 revolvers placed by the Ordnance Department on September 19, 1890, the thirteenth and very last contract for the M-1873 Single Action Revolver. The guns from this final contact were subsequently delivered in two lots of 1,000 revolvers each on February 16 and April 28, 1891. Without obtaining a factory letter it would be difficult to determine which of the two lots this revolver was delivered with, but I have a feeling that based upon its serial number (and the highest recorded serial number examples from this final contract) it was with the February group. As the arsenal sub-inspector assigned to the Colt factory during this time, Carr inspected every contract revolver in detail. As a result, this revolver bears his sub-inspection initials, R.A.C., on nearly every major component, along with his inspection cartouche on the right side of the grip. The revolver appears to be complete, correct and authentic in every way. The revolver is serial number 137561, which places its manufacture in 1891. The complete, matching serial number 137561 appears on the triggerguard, frame, and bottom of the grip strap (in two lines), with the abbreviated serial number 7561 (the last four digits) on the barrel under the ejector housing, which must be removed to see it. The cylinder is an inspected but unnumbered replacement that appears to be original to the period of use of the revolver. During the service life of Single Action Army revolvers parts often had to be replaced in the field or by Springfield Arsenal armorers. To this end, numerous replacement parts were ordered along with the revolvers to have a stock of parts on hand. Major components such as cylinders were inspected by the sub-inspector at the factory when the parts were ordered, but were not serial numbered. This cylinder bears a correct Rinaldo A. Carr R.A.C. inspection mark on its rear face and no other markings. The order of spare or replacement parts from Colt had started in 1874 and would continue through at least 1908, long after the Single Action Army had been relegated to a secondary role as a US military revolver. According to Kopec, et. al. some 208 replacement cylinders were ordered as spare parts during the service life of the Single Action Army, not counting the cylinders replaced by Colt when revolvers were returned to Colt for service. The loading gate is assembly numbered 565, and this number should not match the serial number of the gun. The bottom of the barrel, forward of the cylinder arbor pin is marked with the expected R.A.C. inspection mark and a P proof mark. The R.A.C. mark also appears on the bottom of the frame, above the serial number, on the side of the cylinder and on the bottom right side of the grip. The lower left side of the frame is marked with the correct “2-line, 3-date” patent markings: PAT. SEPT 19. 1871 / JULY. 2. 72. JAN. 19. 75. and with the military ownership and inspection mark U.S.. The barrel is marked with the 4th type barrel address (known as the “Elongated Block Letter Address”, found on revolvers with barrels 5 ““ long or longer, from about serial number 54,000 through the end of U.S. martial production at approximately 140,000. This block letter address reads in a single line: COLT’s PT. F. A. MFG. Co HARTFORD CT. U.S.A.. The interior of the backstrap cut out of the grip marked in period ink with the last four digits of the gun’s serial number, 7561. The right side of the grip retains a mostly legible Rinaldo A. Carr cartouche, with the script letters RAC surrounded by a rectangular box with rounded sides. The left side of the grip shows a clear, script SEB cartouche in a rectangular box with rounded edges, with the date of acceptance, 1891 over it. This is the acceptance cartouche of US Ordnance Department receiving officer Captain Stanhope English Blunt, who inspected Colt revolvers with Carr from during the final two contracts for Single Action Army revolvers. The bottom of the grip is marked with the same small R.A.C. sub-inspection found on the other parts of the revolver. All of the markings on the gun remain crisp, clear and fully legible.

As mentioned above, the gun is in about NEAR EXCELLENT overall condition and is an extremely crisp and very pleasing example of an original 7 ““ Cavalry Single Action Army Revolver. The gun retains somewhere around 60%+ of its original blued finish and a similar amount of its original case hardened finish. The barrel retains about 65%+ original finish and shows thinning and minor loss from carry and wear throughout. The muzzle areas shows significant thinning to the blue, and the underside of the barrel shows an area where the finish has been worn away due to contact with the ejector rod head. Flecks of lightly oxidized age discoloration are mixed throughout the length of the barrel, but the barrel is free of any pitting with only the tiniest traces of pinpricking around the muzzle. The barrel has not been refinished at any point in time, and strong traces of the original “feathered” polish marks are present on either side of the front sight. The balance of the gun has a very attractive, untouched plum-brown patina in the areas where the finish has worn or faded, with the exception of the area worn by the ejector rod, which has a smooth pewter color. The cylinder has a similar amount of original blue present, probably about 65%+, with the same wear characteristic as the barrel, loss along the leading edges and contact points and thinning throughout. The flutes carry the largest amounts of deep, dark blue. The grip frame retains a similar amount of blue as well, with the triggerguard showing slightly less, probably around 50%. Again the same thinning and fading as noted on the barrel and cylinder is present, with areas of flecked oxidation mixed with plum-brown patina in areas where the finish has thinned the most. There is also some light pinpricking forward of the triggerguard on the triggerguard base place. The case hardened frame retains about 40%+ of its vibrant case coloring with the left side retaining the most brilliant coloring and the right side showing a mostly silvery patina with plum-brown oxidation and vibrant coloring confined to the protected areas behind the recoil shield and forward of the cylinder. The frame is mostly smooth and has a pleasing mottled brown and plum patina over the pewter colored metal in the area where the case coloring has faded and worn. The frame does show some tiny patches of pinpricking, primarily on the right hand side where the finish is most worn, combined with some scattered minor flecks of surface oxidation. The hammer retains about 20% vivid case coloring, most of which is confined to the face of the hammer neck, where it has been protected by the frame. The balance of the hammer has a mottled brownish patina with traces of case color visible in the protected areas. The trigger retains traces of its original brilliant fire-blued finish, but has otherwise faded to a mostly dull blue-black patina. The screws all retain about 60%+ of their brilliant fire blued finish, but are starting to dull down and develop a pale blue patina. The screw heads are mostly in decent condition, but do show some minor to moderate slot wear. The original and correct late pattern ejector rod is in place on the revolver, along with the original front sight. The action of the revolver is EXCELLENT and the revolver functions crisply and correctly on all positions. The revolver times and locks up perfectly and remains exceptionally tight. The loading gate functions smoothly and locks tightly into place and the ejector rod operates smoothly as well. The bore of the revolver rates about VERY FINE and has a mostly bright appearance. It retains crisp rifling and shows only some lightly scattered areas of very light pitting along its length. The original, oil finished, one-piece walnut grip is in about VERY FINE to NEAR EXCELLENT condition as well. As noted above the grip retains two crisp and clear inspection cartouches, as well as the correct inspection date, a clear sub-inspection mark on the bottom and the correct partial serial number (in ink) in the backstrap cut out. The grip fits the frame perfectly and shows age, wear and patina that match the revolver perfectly. The grip is solid and free from any breaks, cracks or repairs. The grip shows the usual bumps, dings, minor marks and mars from service and use, as would be expected from a late-19th century military revolver, but shows no signs of abuse or neglect.

Overall this is a very crisp, well marked, and very attractive example of a 7 ““ Colt Single Action Army US Cavalry Revolver. The gun is complete, correct and original and somehow appears to have escaped the refurbishment, rebuilding and barrel shortening that so many marital Single Action Revolvers were subjected to during the twilight of their service life. Untouched, well-marked Cavalry Single Action Revolvers are very tough to find these days. Typically, when a late production revolver like this is discovered having escaped the alteration to “Artillery” configuration the gun can be traced to either National Guard service, or possibly having been stolen. A review of the serial numbers available to me from the 4 Volume Springfield Research Service serial number books reveal that three other Cavalry single action revolvers close to the serial number of this gun (numbers 137671, 137701 and 137940) were stolen from Company K of the 8th US Cavalry on October 26, 1892. This gun may have been similarly stolen. However, it seems unlikely that a gun stolen about 18 months after having been received by the military would have a replacement cylinder in it so quickly, or that anyone outside the military would have had access to an inspected cylinder some time later. More likely is that the gun was a National Guard (aka “Militia”) revolver that probably saw service during the Spanish American War and had to have the cylinder replaced sometime thereafter. It is interesting to note that on May 27, 1902 the State of New York was issued five replacement cylinders. Other states likely received cylinders as well, but the parts issued to the various states are not always listed in available records. New York did receive some 1,120 Single Action Army revolvers between January 1893 and December of 1896, making it quite possible that this gun was among them. The only guns I could find in serial number lists in the 137,XXX range, other than the 3 stolen examples 6 others, all of which had been altered to Artillery configuration. These six examples are fall between the 137,7XX and 137,9XX serial number range. Many of the martial single actions issued to the various states saw use with volunteer regiments during the Spanish-American War, and fought in Cuba and subsequently in the Philippines. This is a very high quality, high condition example of an unaltered “Cavalry” Single Action Army from the very last contract for that pattern of revolver, which I am very sure you will be glad to add to your collection of Colt military handguns.