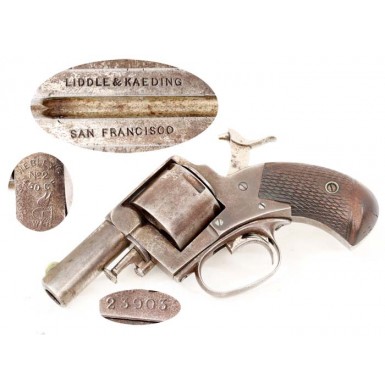 Offered here is a VERY GOOD condition example of a Webley No 2 Bull Dog Revolver that is bears the very desirable western American retailer mark of Liddle & Kaeding of San Francisco. Robert Liddle was born in 1824 and initially worked as a gunmaker in Baltimore, MD during the 1840s and into the early 1850s. At some point in time circa 1853 or so, Liddle moved to San Francisco where he established a new company as Liddle & Co. Sources differ but it appears sometime in the latter part of the 1860s, Liddle formed a partnership with Charles V. Kaeding, creating the firm of Liddle & Kaeding, which operated until 1889, at which point Liddle went back to working under his own name until 1898. It appears for at least part of the time during the 1870s, Liddle’s son James Henry also worked with the firm. The company was an all-around sporting goods retailer that retailed guns of all sorts (both domestic and foreign) as well as a wide variety of “outdoor” equipment and advertised locally as the “Sportsmen’s Emporium”. While the firm may have initially manufactured some arms, and likely preformed repair work as well by the Webley era they seemed to be primarily a retailer, despite some of the wording in their advertisements. The first advertisement that I could find for the company is from the August 11, 1872 edition of the San Francisco Chronical, and it reads at the top: ATTENTION! SPORTSMEN! and goes on to claim the firm provided “THE LARGEST AND BEST assortment of GUNS, FISHING TACKLE and SPORTING ARTICLES on the Pacific Coast.”. A larger and bolder ad in the August 31, 1880 edition of the Chronical read in part:

Another add, dated march 19, 1887 read in part “THE OLD RELIABLE HOUSE. Fishing Tackle! Fishing Tackle!”, and went on to list the varying types of fishing supplies offered by the firm. From examining the large number of advertisements for the firm in the San Francisco Chronical between 1872 and 1887, it appears that as the 1880s progressed the company specialized more and more in sporting good (and sporting arms), with less emphasis (or none) on handguns in the ads, and eventually concentrating on promoting their shotgun inventory and fishing equipment. Based upon the fact that this is a No 2 Bull Dog and the firm seemed to have been selling fewer pistols during the latter half of the 1880s, I would estimate that this revolver was retailed by the company in the first half of the 1880s. The topstrap of the revolver is clearly marked in two lines, one on each side of the sighting groove: LIDDLE & KAEDING on one side and SAN FRANCISCOon the other. The left side of the frame is marked in three lines, forward of the cylinder: WEBLEY’S / No 2 / .450 CF, with the upper and lower lines arced like a cartouche. Below this is the famous Webley “Winged Bullet” logo over the letters W & S, and below that is the serial number 23903. The last three digits of the serial number, 903 are found on the rear face of the cylinder, and the assembly number 3 is found in several places, including the rear face of the cylinder, on the interior lip of the loading gate, twice on the grip frame under the left grip panel and twice on the interior of each grip panel. Birmingham commercial proof marks are found on the barrel and on the cylinder between the chambers. The gun is 100% original and correct in every way. The gun retains about 10% of its original nickel plated finish overall, with the large majority having flaked away, revealing the bare metal underneath. The exposed metal has developed a mostly smooth, dark brown patina. The gun is mostly smooth with no serious pitting present but it does show some scattered areas of pinpricking (mostly on the frame forward of the chamber mouths) around the muzzle. There are also some scattered patches of minor surface oxidation present on the metal, mostly forward of the cylinder chamber mouths and on the barrel. The revolver is mechanically EXCELLENT and functions perfectly in every way. The revolver times and indexes correctly and locks up quite tightly. The action functions crisply in both single and double action modes, and the loading gate closes tightly and securely as it should. The Webley lockwork allows the cylinder to rotate when the hammer is down, with the cylinder only locked at the time of firing when the trigger is all the way to the rear. This same lock work deficiency is typical of many English percussion revolver designs of the previous decades. The “half cock” notch is not a half cock at all, but a safety notch to keep the fixed firing pin from contacting a primer, were the revolver to be dropped and land upon its hammer. The bore of the 2 3/8” long barreled revolver rates VERY GOOD+ and retains very crisp 9-groove rifling its entire length. The bore is fairly dark and seasoned and shows evenly distributed light pitting along its length, as well as some smaller areas of more moderate pitting. The original half-moon, German silver front sight is in place on the top of the barrel near the muzzle and is in fine condition. The two-piece checkered walnut grip panels remain in VERY GOOD+ condition as well. The grips are solid and complete and free of any breaks or repairs. The left grip panel shows a very minor grain crack in its bottom, that remains tight and stable and is mentioned for exactness. The checkering shows some minor wear and flattening to some of the points, as well as some very minor bumps and mars, all of which are typical of a revolver that was primarily carried concealed.

Overall this is very nice, solid example of a very desirable San Francisco retailer marked Webley No 2 Bull Dog Revolver. The gun remains in VERY GOOD complete and original condition with fine markings throughout. These guns were a famous part of the American West, and while even the cheaper American made copies are becoming collectible, nothing beats the desirability of an original Webley from the period. The gun has a very desirable San Francisco retailers mark and is chambered for the largest and most desirable cartridge, Webley’s .450 Centerfire. This is the type of gun that the serious gambler, gentleman who wanted real protection or an undercover San Francisco lawman would have carried, and it is certainly one of those guns that probably could tell some wonderful tales if it could talk. I think you will be very pleased with the untouched condition and fine markings on this scarce Liddle & Kaeding of San Francisco marked Webley Bull Dog revolver.