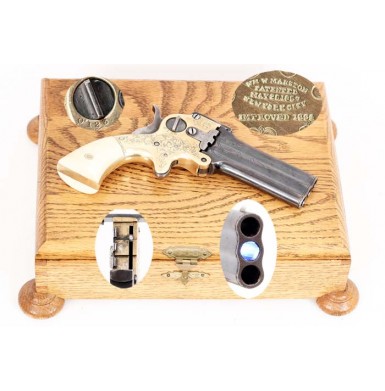 This is a really outstanding, presentation grade example of a scarce three-barreled derringer by William W. Marston, and engraved by the renowned L.D. Nimschke. William W. Marston was born in England in 1822. He was the son of Stanhope W. Marston, who was a gunmaker that immigrated to America sometime prior to the 1840s. Stanhope established himself as a gunmaker in New York and produced percussion pepperboxes, as well as single and double barrel pistols, some with swivel breeches. He worked from 1844-1866 and during that time received two US patents (#7,887 in 1851 and #45,712 in 1865) for innovations in firearms design. His son William was naturalized as a citizen on April 8, 1843 and went into the family business, initially working for his father and then going out on his own. William worked from 1844 until he died in 1872, and during that time amassed at least 6 firearms related patents. These included #6,514 in 1849 for a lock design, #7,443 in 1850 for a breechloading firearm and #13,581 in 1855 for a pepperbox. He also received two patents for ammunition designs (#8,956 in 1852 and #40,490 in 1863), the latter of which was for a self-contained metallic cartridge. Some of the most famous and intriguing of his firearms were his line of three-barrel rimfire cartridge pocket pistols. He produced them in both .22 and .32 rimfire, with the majority of the .22s being made with a sliding knife blade along the side of the 3 superimposed barrels. The larger caliber superimposed pistol was manufactured in .32 rimfire, but was made without the knife blade. However, the .32 caliber pistols did include a useful extractor mechanism to remove the spent cartridges. Marston manufactured some 3,300 of these 3-barreled “derringers’ between 1864 and 1872. They were made with either 3” or 4” barrels, and the standard configuration was a silver plated brass frame, blued barrels and two-piece wood grips. The guns were single action, and had an indicator switch on the right side of the frame that showed which of the barrels the pivoting the firing pin was going to fire. The firing pin automatically indexed from the “0”, or safe position, to #1 (bottom barrel), #2 (middle barrel) and #3 (top barrel), each time the hammer was cocked. The rotating switch gave the shooter a visual indication of which barrel had just been fired and which one would be next. After the gun was discharged and reloaded, the indicator switch was rotated by the user back to the “0” position, to be ready to fire again the next time the hammer was cocked. According to Flayderman’s Guide to Antique American Firearms, the first 50 of the .32 pistols were offered with elaborate scroll engraving as a standard feature. Later guns only offered the engraving as an extra price option. Other extra-price features included various plated finishes and high-grade grips of pearl or ivory. Apparently at least some of these engraved pistols were decorated by the world-renowned engraver Louis D. Nimschke. Nimschke, like his equally famous contemporaries the Ulrich’s and Gustav Young, was an extremely talented engraver who had emigrated form Germany. During the second half of the 19th century, Nimschke applied his engraving talents to a wide variety of American firearms, from smaller makers like Marston to the biggest names, like Colt. Nimschke apparently had a strong affiliation with the New York retailer Schuyler, Hartley & Graham (later just Hartley & Graham), and many of his most famous pieces, like Teddy Roosevelt’s profusely engraved Colt M-1873 “Single Action Army” were engraved by Nimschke working on contract for New York retailer.

Offered here is a truly fantastic example of an L.D. Nimschke Engraved Marston .32 Three Barrel Derringer. The pistol has a polished brass frame, blued barrels, ivory grips and of course, Nimschke’s wonderful engraving. The pistol is in about EXCELLENT overall condition and is truly striking. The gun was featured on the cover of the December 1997 issue of THE GUN REPORT (Volume 43, #7), and is also accompanied by a copy of that magazine. A binder of research and information about the pistol, collected by one of its former owners accompanies the gun, including a January 4, 2005 dated letter from Robert Evans, the historian for the Firearms Engraving Guild of American (FEGA), confirming that the pistol is indeed one engraved by Nimschke. This was confirmed by comparing the pistol against copies of engravings from Nimschke’s pattern book. Mr. Evans thorough evaluation also concludes that the ivory grips are factory original. The pistol features Nimschke’s classic floral motif scroll engraving on the brass frame, and his understated patterns on the barrels and at the muzzle. Even the backstrap is tastefully enhanced with Nimschke’s art. The frame is crisply and clearly marked on the left hand side in a four line cartouche: WM W MARSTON / PATENTED / MAY 26, 1857 / NEW YORK over the additional legend: IMPROVED 1864. The pistol is additionally marked with the serial number 46 under the left grip panel. The highly polished brass frame has the appearance of being gold plated. However, it was probably originally silver plated, as most Marston pistols were, and there are some minute traces of silver on the frame under the grips, inside the receiver and around a couple of the screws. The blued barrels of the pistol retain about 80% of their deep, dark original blue, with some thinning and fading from handling over the years. The majority of the wear and loss in along the top and bottom barrel edges, and the sides of the middle barrel. The metal is almost entirely smooth throughout out, with only a couple of minute areas of very minor pinpricking noted. The pistol barrel bores are all in NEAR EXCELLENT condition and remain bright throughout with crisp rifling. There is only the most minimal pinpricking present in some of the grooves, and the grooves show some minor frosting as well, but no serious indications of any significant use. The case hardened hammer retains about 50% of its original case coloring, with some of the mottling and traces of vibrant blues and purples still visible. The balance of the hammer has faded to more mellow bluish-gray patina. The action of the pistol works perfectly, and the hinged barrels open smoothly when the top latch is rotated clockwise (with the muzzle pointed away from the body). The latch locks the pistol together tightly when the barrels are closed and there is no perceptible wobble or shake present. The indicator switch on the right side of the frame shows which barrel will be fired when the hammer is cocked. To reset the firing pin, the switch it rotated to the “0” position, so that the next time the hammer is cocked, the pistol will fire the first barrel. The action of the pistol remains quite crisp and the hammer locks tightly into the full cock position and responds appropriately to the spur trigger. When the hammer is cocked, the pivoting firing pin rotates through its positions as it should, and the indicator on the frame moves as well. The rotating indicator is a little tight, and it is sometimes difficult to set it back to “0” to insure that barrel #1 (the bottom one) is automatically selected when the hammer is cocked for the first time. If the selector is not set to “0” perfectly, then the first time the hammer is cocked, the firing pin will jump to the “2” position. The original rear sight notch is in place on the top of the barrel catch, and the original brass front sight blade is in place on the top barrel, near the muzzle. The pistol is adorned with a gorgeous pair of ivory grips that are in really EXCELLENT condition. They fit perfectly, and have a lovely yellowish-cream colored patina. The ivory shows wonderful grain lines and has lovely green verdigris built up on the inside where the grip panels have contacted the brass frame. The grips are perfectly smooth and free from any of the breaks, cracks, chips or repairs that are so common with 19th century ivory grips. The pistol is accompanied by a contemporary oak display case, lined with blue baize cloth, and a binder of information regarding the gun. The binder includes a copy of the Gun Report magazine that is was featured on the cover of, the original letter from the historian of the Firearms Engraving Guild of America, copies of pages from the Nimschke pattern book, and various documents and research related to the pistol.

Overall this is a really outstanding example of a fabulous 3 Barreled Marston Derringer Engraved by L.D. Nimschke. The pistol is in wonderful condition and is truly striking. The engraving is world class and the ivory grips are absolutely wonderful. For most collectors of 19th century firearms, the opportunity to own a Nimschke engraved gun is a lifetime goal that is rarely realized. The rarity of his work and the extraordinary prices that the guns he engraved demand, simply put these pieces of art out of the reach of most collectors. This wonderful little pistol is absolutely gorgeous and is priced where a collector can actually afford to own a gun engraved by Nimschke. Examples of his work on Marston derringers have brought prices in the $10,000 to $20,000 range, and on Colt’s much higher prices. This wonderful pistol is priced well under the $10,000 price point and is true bargain for a collector who wants to add a beautiful Nimschke engraved pistol to his collection. Any advanced collector will be extremely happy with this little gun on display as a part of their collection.