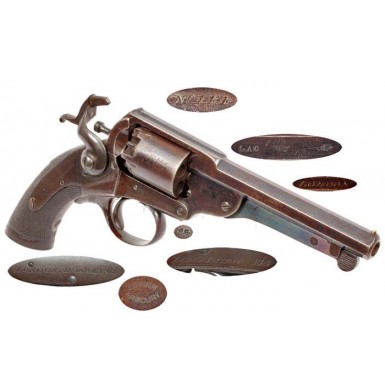 The Kerr’s Patent Revolver offered here is a FINE example of the very rare, early production 80-Bore pistol. The gun is serial numbered 144 on the right side of the frame and on the cylinder, and was clearly produced in 1859. The side plate of the pistol is clearly marked: LONDON ARMOURY CO, and the right side of the frame is marked: KERR’s PATENT. 144, with the cylinder marked No 144. The left side of the frame is marked with the two line oval cartouche of the LA Co and reads: LONDON / ARMOURY. The left upper flat of the octagon barrel is marked: L.A.C. along with the (Crown) / GP and (Crown) / V London proof & view marks. The (Crown) / V mark is also found between the chambers of the cylinder. The top of the barrel is simply engraved LONDON, with no retailer mark.The frame has two small engraved slays of foliate engraving around the screw hole towards the rear of the frame, just under the cylinder. This minor cosmetic enhancement is not typical of later production Kerr revolvers. The gun is a classic early production revolver, with a wide groove in the topstrap, the Type I rammer design with low pivot screw, and a screw retained cylinder arbor pin. The arbor pin screw is missing from the left side of the frame, forward of the cylinder and it appears that a larger than correct screw was inserted at some point in time, as the screw hole is slightly enlarged. Unlike later production Kerr revolvers, this one has no assembly numbers on the major components. Later production guns normally have assembly numbers on the face of the cylinder, inside the trigger guard, and inside the top strap and inside the bottom of the frame. This revolver does not have these later production marks. The gun is mechanically excellent and the revolver times and locks up exactly as it should. The original Type I loading lever is present and functions smoothly also. The pistol retains about 30% of its original blued finish. The finish is most prominent on the bottom of the 5 7/16” long barrel, where the loading lever has protected it. However, the finish remains fairly consistent along the frame and barrel and retains about 20% of the blue on the cylinder as well. The balance of the gun has a smooth plum-brown patina, which has blended almost seamlessly with the remaining blue. The loading lever retains about 50%+ of its original fire blued finish, which has dulled and thinned, but still retains brilliance around the frame juncture. The lock plate retains crisp markings and has a smooth plum-brown patina with no original finish remaining. The hammer has the same smoky brown and plum patina, with about 20%-30% of the original case coloring remaining. All of the edges and markings of the pistol remain very sharp and crisp, with no rounding or indications of cleaning. Unlike later production revolvers, this one has no lanyard ring in the butt, and the butt cap is simply secured with a single screw. The original brass post front sight is present on the end of the barrel near the muzzle. There is some lightly scattered oxidized surface freckling present on metal, with most of this being found on the cylinder. Otherwise, the pistol is almost completely smooth and is essentially free of any pitting. The cylinder retains all five of its original cones (nipples) along with the brass washer spacers. The cones are in good condition with minimal battering and only expected wear. The bore of the revolver retains fine rifling, but is dark and dirty with scattered moderate pitting along its entire length. The bore would most likely clean to about GOOD+ condition, with some effort and a brass brush. The one-piece checkered walnut grips are in about VERY GOOD+ to NEAR FINE condition with strong checkering throughout and only some light to moderate wear and minor flattening of some of the sharp points. The grips are free of breaks, cracks, chips or repairs, and have a wonderful un-cleaned, aged brown color to them.

Overall this is a really attractive example of a wonderful and very early Kerr’s Patent Revolver. The pistol is in much better condition than they are typically found in, and these 80-Bore guns are much scarcer than Confederate marked Kerr pistols. The gun retains a good amount of original blue, is fully functional and is 100% complete and correct with the exception of the missing arbor pin retention screw. The serial number clearly indicates that the pistol would have been in made in 1859 and was probably sold commercially prior to the American Civil War. These pre-Civil War English revolvers were quite popular in the south and there is a strong likelihood that this gun made it to American shores before the outbreak of the war. Whether it saw Confederate use or not, this is a wonderful example of a rare medium bore Kerr revolver in a relatively high state of preservation. This gun clearly saw real carry and use, much more so that it likely would have seen in 19th century England, but it was well cared for along the way. This is a lovely example of a Kerr with nice, clear marks that a true “no excuses’ gun that would be a great addition to any collection of Civil War era revolvers.