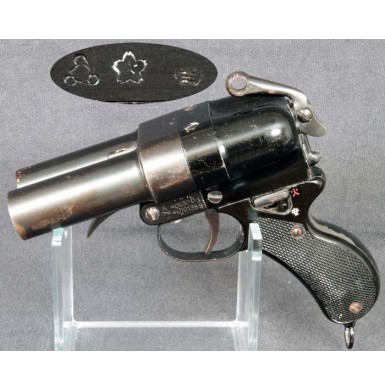 This is a very scarce example of the Imperial Japanese Naval Type 90 2-barreled Signal Pistol. The Imperial Navy adopted these 28mm flare pistols in 1930 (year 2590 on the Japanese calendar, thus the Type 90 designation) as a replacement for the earlier Kayaba 1st Type 28mm flare pistol that had been adopted in 1927. The Type 90 signal pistol was also manufactured in an even scarcer 3-barreled version. Approximately 10,500 of the 2-barrel Type 90’s were produced between 1930 and the end of World War II, and another 5,100 of the 3-barrel pistols were produced during the same basic time frame. All of the Type 90 signal pistols were manufactured by Kayaba Seisakusho (Kayaba Manufacturing). Kayaba was started in 1919 and by 1935 was producing a wide variety of hydraulic equipment including shock absorbers and aircraft catapults. They remain in business today as a massive international corporation, continuing to produce hydraulic systems and shock absorbers for the automotive, aerospace and other industries. During the production run of the signal pistols, three distinct variants were produced. The differences included the lever system to open the breech, the material that the frame was made from, the material the grips were made from and types of finish used on the signal pistols. This Type 90 signal pistol is the “3rd Type”, which were the final ones made, and are found in the serial number range 7,050-10,500. These guns featured a curved horizontal breech latch lever, a cast alloy frame and plastic grips. The 3rd Type, Type 90 signal pistols had a hot salt blue finish on the barrels and black lacquer finish on the frame.

This Imperial Japanese Naval Type 90 2-barreled Signal Pistol is in VERY FINE to NEAR EXCELLENT condition. The gun is 100% original and is mechanically excellent. The breech of the pistol opens and locks smoothly and tightly. The cocking lever functions correctly, as does the barrel selector switch on the rear of the frame. The pistol is marked with the Kayaba Seisakusho symbol on the left frame and on top of the barrel cluster at the breech. The left frame is further marked in three horizontal lines: PAT / (Kayaba symbol) N 093006 / N 101355. The right side of the frame is marked with the serial number 9388, placing the gun in the last 10% to be produced during the war. The rear of the left side of the frame has a two-position safety lever, with the upper position marked with a red kanji for “Fire” and the bottom position marked with a white kanji for “Safe”. The top of the barrel cluster is marked with the Kayaba Seisakusho symbol, the Japanese Naval star and an inspectors mark, all in a straight line. The gun is marked throughout with the assembly number 217. It is visible on the breech-locking lever, the cocking lever, the face of the barrel locking lug and the inner bottom of the frame. The barrels retain about 70%+ of their original hot salt blue finish, with some minor scuffing and some light surface scratches, along with some light scattered patches of surface oxidation. Most of the loss is due to fading and what is most likely holster wear. The cast alloy frame retains about 75%+ of its original black lacquer paint finish, with the majority of the finish loss the result of flaking along the front and rear edges of the grip strap. The “Fire” & “Safe” kanji’s retain about 90% of their original red and white paint, respectively. The checkered, two-piece, black plastic grips rate about EXCELLENT. They are free of any breaks, cracks, chips or repairs and they retain sharp, crisp checkering. The only blemish on the grips are a couple of small drops of old white paint, which could probably be cleaned off with little effort.