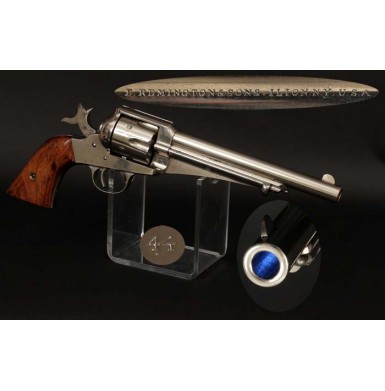 This is an EXCELLENT condition example of the Remington M-1875 Single Action Army Revolver. This model was the first military sized, cartridge revolver to be produced by Remington that was not a conversion of one of their earlier percussion models. The gun was a six shot, single action revolver that competed directly with the Colt Single Action Army. The gun had a fluted cylinder and was produced in three center fire calibers, .44 Remington, .44 WCF (44-40) and eventually .45 Colt. The majority of the revolvers produced had 7 ““ barrels, although a few were produced with 5 ““ barrels and are considered very scarce today. The revolvers were produced with both blued and nickel finishes. Oil finished, two-piece walnut grips were standard, but other options were available on special order. Remington produced the M-1875 revolver from 1875 until 1889, with a total production of only between 25,000 and 30,000; a very small production run when compared with Colt’s M-1873 Single Action Army. Remington entered the big-bore military cartridge handgun market with an initial order for 10,000 pieces from the Egyptian government. These guns were all chambered for Remington’s new .44 Remington CF cartridge, a short lived cartridge that was very close to the .44 Colt in dimensions and power, but was discontinued in 1895 due to lack of sales. Later Remington M-1875s would be produced in the more successful .44-40 and .45 Colt calibers. The Egyptian contract guns were inspected like US military arms, and carried a * mark on the left side of the barrel, forward of the frame and an R sub-inspectors mark on the cylinder and the frame between the cylinder & the barrel. The left grip was also with either an FR or JWR cartouche. Unfortunately for Remington, the big Egyptian order did not pan out and few (if any) of the guns were actually delivered to the Egyptians. The problems arose over Egypt’s failure to pay large balances due on an earlier Remington Rolling Block military rifle orders. The end result was that the production of the Egyptian contract guns ended prematurely and the existing guns were apparently sold on the open market to allow Remington to recoup their money. Despite the overwhelming competition from Colt, Remington did manage to receive a small contract form the US Government in 1883 to deliver 639 nickel plated M-1875s to the Department of the Interior for use by the Indian Police. These guns were chambered in the much more popular .44-40 (44 WCF) caliber. Among the luminaries of the old west era who used the Remington 1875 was infamous outlaw Frank James, who preferred to carry one in .44-40 (the same caliber as his Winchester rifle), noting that it was important to “not confuse your ammunition in a hot fight”. While the Remington M-1875 never achieved the success or sales figures of its Colt rival, it was none the less one of the important cartridge revolvers to see use during the taming of the American West. To this day, its distinctive rib under the barrel brings to mind the Remington percussion military revolvers that it was based upon, and makes the gun instantly identifiable in period images.

This outstanding example of a Remington M-1875 “Army” Revolver is in EXCELLENT condition. The pistol is 100% complete, correct and original in everyway. The gun is clearly marked on the top of the round barrel in a single line: E. REMINGTON & SONS, ILION, N.Y. U.S.A., and with the number 44 on the left side of the frame, forward of the cylinder. This mark indicates that the gun is chambered for the popular .44 Winchester Center Fire caliber (.44-40). Otherwise the gun is unmarked externally. The serial number 502 is present on the edge of the left grip frame, underneath the grips. Both of the grips are also pencil numbered 502 on their interior surfaces. The inside of the right grip is also marked in pencil Don Farm, possibly the name of a former owner. The gun is in extremely crisp condition and could possibly be unfired. The pistol retains about 93%+ of its original nickel-plated finish, with only the most minimal finish. There is some minor finish loss and high-edge wear along the sharp edges of the frame and points of contact. The other areas of minor loss are scattered patches of lightly freckled flaking and minor oxidation that are scattered along the prominent barrel web and the ejector rod housing. There are also some tiny pinpricks of oxidized flaking on the right side of the frame, to the rear of the loading gate, and on the left side next to the hammer. Due to the wonderful bright nickel finish on the gun, it was very difficult to get decent photographs of the pistol. The pistol reflected not only the photographic lights, but also the entire room the pictures were taken in, resulting in some odd colored reflections and making representative pictures very difficult to produce. The pictures do not do this pistol justice and it is much better looking in person than in the photographs. The cylinder shows a light “turn ring” or “drag line”, where the bolt stop has lightly scored the nickel finish. The cylinder chambers are practically new, and are bright and with almost no wear present. The bore is equally outstanding. It is brilliant and bright with factory new rifling. There is a little bit of old dust and dirt in the bore that will be simple to clean out. The outstanding condition of the chambers and bore suggest that this pistol has been fired very little, if at all. The action of the revolver is excellent as well, and it functions perfectly on all positions. The revolver times, indexes and locks up perfectly and had a very crisp trigger pull. The loading gate functions perfectly and snaps securely into both the open and closed positions. The ejector rod functions smoothly and had very strong spring tension, suggesting very little use. The cylinder arbor pin is securely retained by the catch at the end of the tapered barrel web, but is easily withdrawn by depressing the release. The screws are all in very fine condition, and all retain about 50%+ of their original fire blued finish, which is fading. The heads remain crisp and sharp with almost no slot wear visible. The two-piece grips of the pistol are in NEAR EXCELLENT condition as well. The oil-finished walnut grips appear to have a light varnish on them, which could be factory original or applied during the period to protect them. The grips are solid and show no breaks, chips or repairs. The grips do show some expected minor bumps and dings from handling and use but no significant abuse. There are a handful of minor impact marks on the bottom of the left grip, but nothing beyond the scope of normal use.

Overall this is simply an outstanding example of the famous Remington M-1875 Army revolver. The revolver is in one of the most desirable of calibers, .44-40 and is simply drop-dead gorgeous. According to the Blue Book of Gun Values (34th Edition), a Remington M-1875 revolver in 90% condition is valued at $10,000! This gun is certainly better than 90%, but is not priced anywhere near the five-figure price point. If you have been looking for the opportunity to add a truly outstanding example of one of the most recognizable revolvers of the old west era to your collection, here is a great opportunity to own an investment grade revolver that you will be extremely proud of.