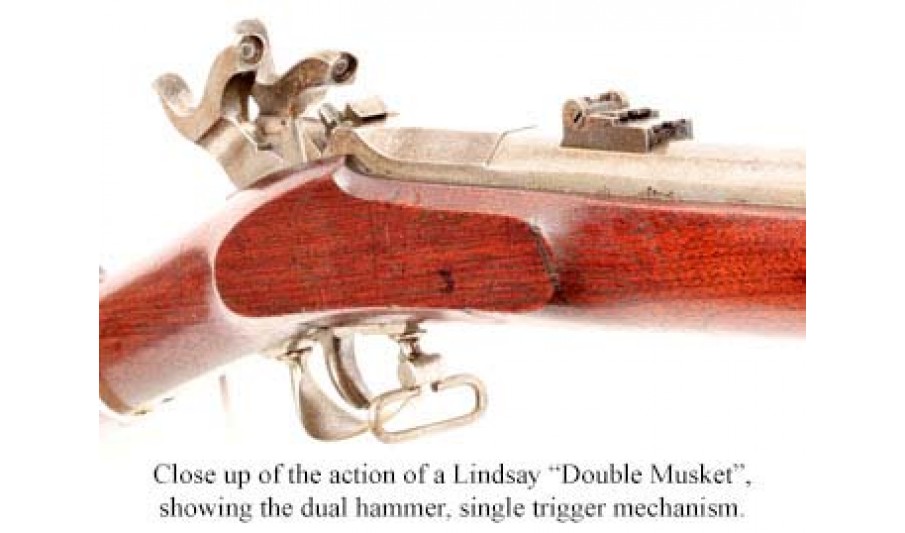 On October 9, 1860 John Parker Lindsay of New York City received US Patent #30,332 for “improvement in locks for fire-arms.” The patent covered a unique, superimposed muzzleloading percussion firearms action that combined two hammers, a single trigger and two loads, fired from a single barrel. Lindsay’s patent actually claimed that his “new and useful Improvement in Locks for Fire-Arms” could be applied when “two or more hammers are used”. The primary patent coverage was for the firing mechanism, which combined a single trigger and two (or more) hammers. It is possible that Lindsay developed the concept for his mechanism while working with New York gun maker John Walch circa 1859, who had patented a double-hammer percussion revolver that utilized superimposed loads to double the number of rounds fired from a percussion revolver.

Lindsay’s mechanism allowed two hammers to be fired sequentially from a single trigger. The auto-selecting single trigger would always release the right hammer first and the left hammer second on two consecutive pulls; not unlike a modern double-barreled sporting shotgun with a single trigger. Using his superimposed chamber concept, with one load on top of the other in the breech, the first hammer would fire the front chamber of the gun, and the second hammer would fire the rear chamber.

In 1861, Lindsay relocated from New York City to New Haven, CT. and began to actively produce and promote his unique firearms. Lindsay initially applied his concept to a series of handguns that he marketed as the “Young America” line. The guns were produced for Lindsay circa 1860-62 by the Union Knife Company of Naugatuck, CT. Two variations were manufactured in .41 caliber (totaling less than three hundred guns), and another one hundred were produced in .45 caliber. However, with the outbreak of the Civil War, Lindsay became intrigued with applying his concept to a .58 caliber rifle musket and obtaining a US military contract.

Using the superimposed load concept, in combination with his patented double-hammer/single-trigger system, Lindsay produced a sample musket that effectively doubled the firepower of the average soldier in combat, as the design could be fired twice before it was reloaded. However, the design allowed the gun to retain a single barrel, keeping nearly as light and handy as a standard percussion rifle musket. During the summer of 1863, Lindsay worked in vein to obtain an Ordnance Department contract for his “Double Musket”. However, Chief of Ordnance James Ripley was unimpressed and no orders were forthcoming. This was despite the fact that a trial musket, tested at West Point, had been found quite satisfactory, with the reviewing officer noting that “In my opinion, the invention is a success.” In September 1863, Ripley was replaced by General George Ramsay, and Lindsay saw an opportunity to press his case again. In October, he submitted an improved version of the musket that had been tested at West Point, and managed to obtain a small contract to provide 1,000 of his patented double rifle muskets. The contact was officially issued in mid-December, with deliveries due to commence in April of 1864, at a price of $25 each.

As with his pistol project, Lindsay had to turn to outside manufactures to actually produce the firearms. He appears to have relied upon his old contractor, the Union Knife Company, to manufacture the receiver and mechanical action of the gun, although some sources think that Lindsay may have manufactured this complicated lock work himself. The guns themselves were produced by Samuel Norris of Springfield, MA. Norris had previously produced US M1863 Rifle Muskets for the state of Massachusetts, but that contract was at an end and no further contracts appeared to be forthcoming. As such, Norris was more than happy to take on the production of the Lindsay muskets, mating the Lindsay provided receivers with the rest of the components necessary to produce the completed rifle musket. Due to various delays, the guns were not available for delivery in April of 1864, as had been specified in the contract, and Lindsay had to request a contract extension. The production issues were resolved, and the entire order of 1,000 guns was delivered and accepted on August 16, 1864. Less than one month later, on September 12, 1864 half of the muskets were issued for field trials.

Lindsay Double Rifle Muskets were issued to the 5th, 16th & 23rd Michigan Volunteer Infantry regiments, as well as to the 9th New Hampshire Volunteer Infantry. The 16th Michigan received 166 of the guns, and used them at the battle of Peebles’ Farm, which was fought at part of the Petersburg Campaign from September 30 through October 2, 1864. The other regiments all received 83 guns each. Reports from both the 16th MI and 9th NH indicate that some catastrophic failures occurred in the field, causing both injuries and deaths.

The failures of the guns in the field were completely understandable. While the superimposed loading concept worked fine in theory, it did not work so well in the field in a combat situation. The system relied upon very careful loading, with the bullet from the rear most charge preventing that second powder charge from going off when the first chamber was fired. This did not always happen (especially when the musket was loaded quickly or under duress), and would result in both chambers detonating simultaneously; usually with disastrous results for both the musket and the shooter. The other problem, which was equally disastrous, was that the long flash channel to the forward chamber could become fouled, preventing it from discharging. When the second charge was fired, with the first charge still blocking the barrel, the results were often catastrophic as well. Either problem ensured a bad day for the gun and the soldier using it, and as a result the weapons were universally despised by the men they were issued to. Due to the various calamities relating to the use of the double musket in the field, the guns were fairly quickly condemned and withdrawn from service.

The US M1863 Lindsay Patent Double Rifle Musket had the same basic profile of the US M1861, M1863 and M1864 rifle muskets then in service. In fact, other than the special lock mechanism and breech, the majority of the parts were the same as found on US M1863 Rifle Muskets; this is not surprising, as Norris likely had lots of spare parts from his M1863 contract on hand. The gun was .58 caliber, with a barrel that measured 41 1/8” length rather than the usual 40” of the M1863 rifle musket. This was due primarily to the larger breech to accommodate the two superimposed loads. The top of the breech was marked in two lines, reading LINDSAY over PATENT’D OCT. 9. 1860. Due to the nature of the lock mechanism, the walnut stock has no external lock plate on the obverse, but still retained the same silhouette as the M1863 rifle musket. The barrel was secured to the stock with three rounded clamping barrel bands and a screw at the end of the extended breech tang. All metal parts were finished in the white and polished to “National Armory Bright”. Civilian Ordnance Department sub-inspector Andrew D. King inspected all examples of these muskets that I have ever encountered, with a pair of cartouches on the counterpane of the musket. King also sub-inspected the breech and trigger systems of the guns, with the balance of the components carrying various sub-inspector marks from other viewers. The standard US M1861 pattern rear sight was used on the gun and the front sight doubled as a lug to accept the standard US M1855 angular socket bayonet. Sling swivels were attached to the middle barrel band and to the forward bow of the triggerguard.

Due to the relatively low production figures, and the fact that some of the guns actually destroyed themselves in the field, the Lindsay Double Musket is a fairly scarce item on the collector market today. It is also possible that some of the guns were intentionally destroyed by the soldiers in the field to make sure that they would not have to use them again in the future. Although Lindsay’s loading concept was a dismal failure, his auto-selecting trigger mechanism lives on and continues to be used in many double-barreled sporting shotguns to this day.

Philip B. Ennis
10/10/2021
I own a Lindsay that was certainly used by the 16th Michigan at Peebles' Farm. It bears, in front of the trigger guard, the ubiquitous Confederate C & R (Cleaned and Repaired) stamp "&". The mark is authentic. Accordingly one can conclude that this arm was a captured casualty of the fight of September 30th to October 2, 1864.
jim naumec
03/31/2020
I acquired a Model 1863 Double Shot Musket a few year ago that had the barrel and stock cut back , Restored the stock to its correct dimensions and had the barrel stretched and relined . Have been shooting it now on a regular bases , NOT double loading but the lower , left hammer side only , not that brave or stupid. With over 300 rounds to date shot through it I have not experienced any of the doom and gloom expressed by some in regards to the fear of pre ignition /cook offs because chances of the upper ignition channel becoming plugged with carbon and "possibility" becoming a "glow plug" . Keeping it clean prevents this fairy tail.As mention in the previous post the special bullet was developed and used in Lindsays Double Shot Pistol NOT the musket. Lindsay stated only a full sized 58/100 well greased ball be used which most likely caused the problems when not used ,ie under sized , by allowing the upper charge to ignite the lower. Interesting to read , the trials and testing were successful when properly loaded and maintained.
Jim Wimbish
01/18/2019
On mine, which is in excellent shape, I have noticed a big difference in trigger pull between the left and right hammer. I guess that this is how they got the right hammer to go off first when both were cocked. The pull to drop the left hammer is substantial. I have also found pictures of a special bullet that was used with this gun. I guess that it was a size and shape to give the proper alignment in the barrel with the flash channel to the top charge. I have even seen pictures of a wheel lock with two locks to fire two rounds from a single barrel. So the idea was hundreds of years old when Lindsay came up with his clever design.