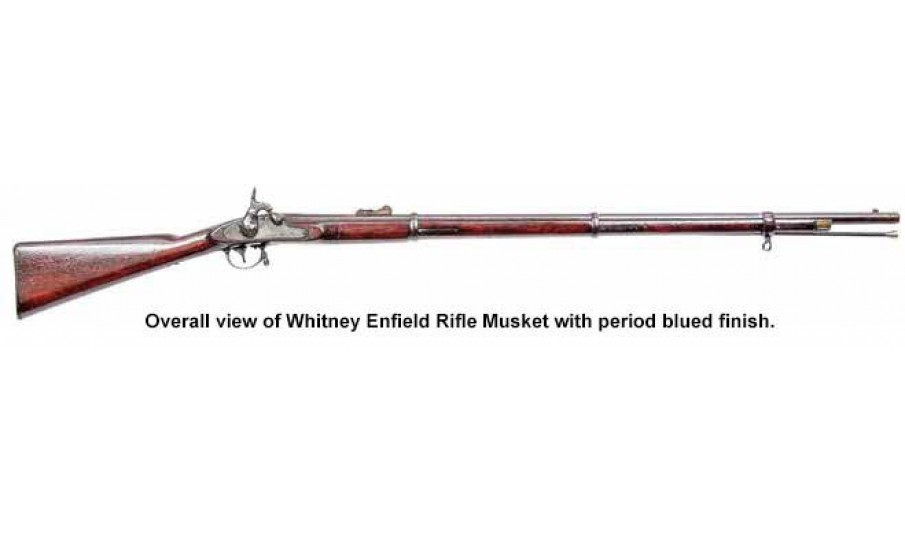 The American-made Pattern 1853 Enfield Rifle Musket contract that was the downfall of the Robbins & Lawrence firearms manufacturing company. As part of the bankruptcy process, many assets of the defunct firm were sold at auction, with one of the largest buyers being Eli Whitney Jr., the principle of the Whitneyville Armory. As previouslt noted, Whitney obtained a large number of gun parts as well as some machinery at this auction.

Bob Jersey
10/04/2022
I am happy to have found this blog. I have owned for years my great grandfather's Whitney Enfield rifled musket. He served in the 19th Illinois Regiment Infantry and I believe that the rifle was issued by the US government because it has US stamped on the top of brass butt plate. Does any know how many rifles that the US government purchased?
Brian Burkett
05/26/2022
Interesting note: These Robbins&Lawrence band springs that are utilized on the Whitney Pattern P53's also ended up on the Unmarked M1861 muskets dated 1864. While the Federal gauge was showing these band springs exposed area was 2", the unmarked M1861's that used the remainder of the surplus Robbins & Lawrence springs have a 2 5/16"exposed length.
Philip Ennis
06/07/2019
Going through my extensive library I discovered an armament report dated May of 1863 from General L. McLaw's division. its purpose is to list all the arms then in possession of the 19 regiments of said division. The top of the first column reads: Springfield Rifle Cal. .58; the second: Long Enfield Cal. 57; the third: Short Enfield Cal 57 the fourth: Other rifles for cavalry use; the fifth: Miss. Rifles 54; THE SIXTH: ENFIELD MUSKET CAL. 57; the seventh: Springfield Musket Cal.69. All the arms in column SIX all 823 of them were in the hands of GEORGIA men; Cobbs Legion, Phillip's Legion, 16th, 18th and 24th. Certainly these "Enfield muskets", listed distinctly and 4 columns from the conventional Long British imported variety are these! And these in our opinion are the ubiquitous LONG WHITNEY ENFIELD RIFLED MUSKETS. Please note they are listed as Caliber .57 and this means they were not the .75 caliber Enfield/ Tower muskets for it would have been stated.
Philip Ennis
02/09/2019
In almost 60 years of collecting and dealing I have owned a few of there Whitney Enfield rifled muskets. Most, if not all, have had Confederate associations. At least one was raised carved with an inscription stating that it was "Picked up at the Peach Orchard...."; this example last examined at Mr. "Dickie" Ferry's home about 15 years ago . At least 2 Civil War period photos are extant showing Georgia soldiers holding Whitney Enfield rifled muskets (not P1853 Enfields to be sure; the longer distance between the muzzle end and the nose cap is manifest). To my mind these arms "whistle Dixie" the very few staying North not withstanding.

You must login to add a comment. If you do not have an account, you may register for one. Registration is free!