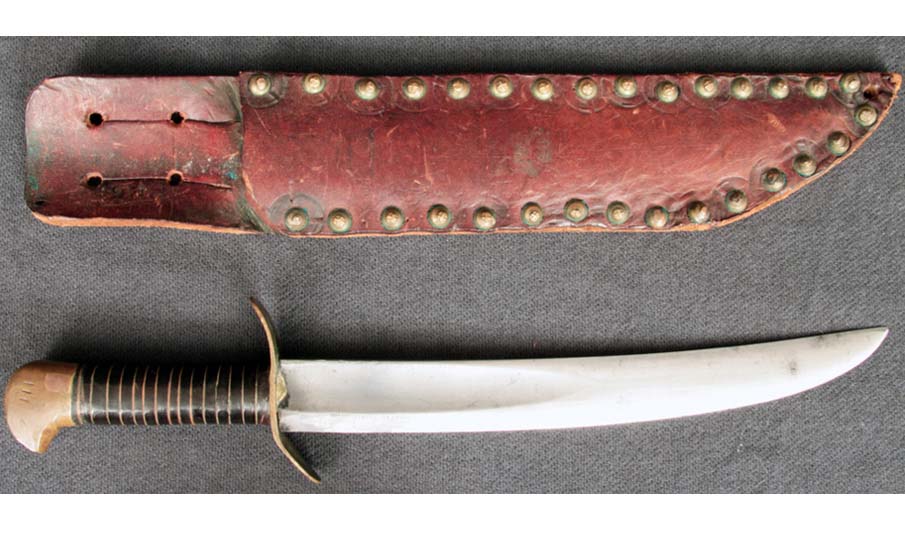 This is one of the coolest and most interesting World War II era “Theater Knives” I have ever had the opportunity to offer. It is especially interesting to me, as it combines my love of Civil War era weapons and WWII militaria into a single item. This large and rather intimidating combat knife was crafter from a US Civil War era M-1860 Naval Cutlass. The knife was made from the forward portion of the cutlass blade, is 9 5/8” in length, and retains a little over 4 1/2" of the original cutlass fuller. The overall length of the knife, including the hilt, is just under 13 3/4” in length. The USN M-1860 cutlass was the last of the 19th Century small arms to see service with the US Navy, and they were still in limited service in the arms lockers of some World War II US Navy ships. In fact a WWII US Navy veteran sold a M-1860 cutlass to a friend of mine a few years ago and recalled that he had used the cutlass to fend off sharks for several hours after his ship, the destroyer USS Monssen(DD-436) was sunk in the Pacific! The Monssen was sunk in “Ironbottom Sound” after the November 12-13, 1942 battle of Guadalcanal. This sailor was the last man out of the Number 4 turret on the ship. This bit of first person, anecdotal evidence clearly illustrates that these cutlasses saw at least limited service during WWII. Fighting knives were often manufactured in the machine shops onboard US Navy ships, and this knife was almost certainly made in the Pacific Theater by a Navy machinist. In fact, photos exist of Marines on Guadalcanal carrying theater knives made out of M-1917 Naval Cutlasses, proving that such makeshift sword-knives saw real service in combat situations.

Hubert Manton
11/27/2021
Thanks for attending one of our past events! As a member, we will give you exclusive deals and offers from our partners which are not available to the public. We will be sending you a few special offers every single day for the next year. Our partner: https://cbdfx.co.uk Kind regards Allegra Events Limited 106 Arlington Road Camden Town, London NW1 7HP United Kingdom Registered in England No. 6754003 Tel: +44(0)20 7691 8800