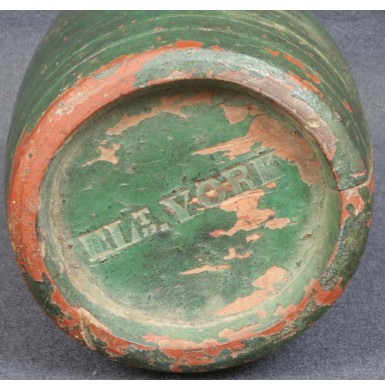 This is one of the most interesting and intriguing pieces of antique militaria that I have ever had the pleasure of offering for sale. The item is a Revolutionary War era cask type canteen, fresh out of the woods in New Hampshire. This style of canteen is referred to as a “rundlet” or “powder cask” type canteen. These small casks were copies of larger liquor and wine casks, and in days of the word origin, the term rundlet meant a cask that held approximately 18 gallons of wine. The main bodies of the casks were turned from a single piece of wood, with two end pieces, and were not made in the more common stave and loop style of construction. They often had decorative lines cut into them, giving the appearance of the more common stave constructed casks. These types of small casks were often brought from home for use as canteens during the American Civil War. The militiamen would typically use a nail or tack on each end to allow the cask to be carried from a sling. The best part about this lovely little rundlet is that the name of the owner is clearly stamped on one end: ELT. YORK. A search of Revolutionary War era muster rolls and records show only one possible person who would match that name: ELIPHALET YORK of Lee, New Hampshire.

Eliphalet York was born sometime around 1753/54, and lived to the ripe old age of 79, dying on March 19, 1833. It appears that York lived most of his life in Lee, Strafford County, New Hampshire “ about 30 miles North-East of Manchester. The most fascinating part of Eliphalet York’s life to us was the time that he spent as a member of Gilman’s Regiment of New Hampshire Militia. According to the records that I have uncovered, York served from at least early December of 1776 through March of 1777. During that time Gilman’s Regiment was sent to reinforce the defenses of New York. York served in Captain Samuel Wallingford’s company, and copies of 3 of York’s New Hampshire Militia Payroll vouchers are included with the canteen. York appeared before a magistrate in 1832 to help establish that David Davis, who served in the same company with York, was eligible for a veteran’s pension. In that affidavit York says that they marched to Peekskill, NY after enlistment and there they served out their time. York signed the affidavit on September 13, 1832. A copy of the affidavit is included with the canteen as well. A copy of another affidavit from a John Randall is also included with the canteen. This affidavit is for the same basic purpose, in this case to establish that Randall was eligible for a pension. Randall’s affidavit lists both David Davis and Eliphalet York as members of the company who served with him, and offers them as witnesses to confirm his statements. The Regiment may have been involved in the Battle of Peekskill on March 22, 1777 and according to the pay vouchers that I have uncovered they received their final pay on March 28, 1777. I am absolutely confident that this canteen is not only of the Revolutionary War period, but is quite definitely the canteen used by Eliphalet York.

The canteen itself is about 6 ““ in overall length. It is not exactly round, and the very slightly oval shape has a 3 1/8” minor axis and a 3 ““ major axis. The canteen has reinforced 5/8” bunghole in the upper center. The canteen is painted in two layers “ the original layer is a deep brick red color, which has been painted over with a dark green color. This would make sense, as green was a popular color for militia riflemen to paint their canteens from Revolutionary War era through the mid-1805’s, and the canteen was likely painted green over the original red when York took the rundlet from home to military service. The canteen shows some flaking and wear to the paint, with the two end pieces and the edges showing the most loss and wear. The canteen retains about 80%-90% of the original green paint, over a similar amount of the original red paint. The canteen has a fabulous, untouched look and appears to have never been restored or altered. There is a grain crack that runs from one end of the canteen to bunghole, along the top of the rundlet. One of the two end pieces is clearly stamped in a wonderful period font, about ““ tall: ELT. YORK the “T” is smaller and has a set of apostrophes under it. The canteen is strong, solid condition, and the previously noted crack is tight and solid and does not appear to be a structural issue. Overall the canteen rates about FINE, especially when you consider that it is about 235 years old!

I spent quite a bit of time trying to establish a realistic market price for this amazing piece of early American history. While Revolutionary War era canteens do appear on the market from time to time, this style of canteen appears for sale very rarely. On top of that identified Revolutionary War items are almost never encountered outside of museum collections or the finest private collections. In fact identified Revolutionary War items practically never appear for sale on the open market, outside of the occasional auction offering. This is an outstanding piece of American Militaria that dates to the birth of our country. It’s owners time of service was during those dark days of the revolution, where the final outcome was not clear, but things did not look good for our fledgling republic. It is a really attractive example of unique style of wooden canteen and it displays just wonderfully. The opportunities to purchase this kind of Americana are few and far between, so if you have ever wanted an identified item to be the centerpiece of your advanced Revolutionary War collection, this one would be very difficult to pass up.