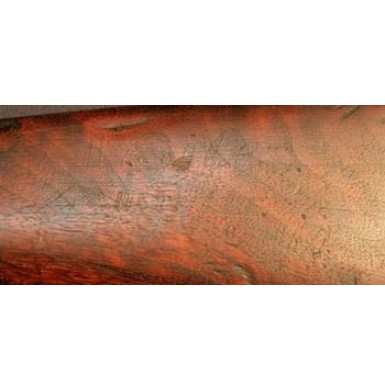 Sometimes when you are examining relics of the Civil War you feel like you are in the middle of an episode of History Detectives on PBS. This wonderful ID’d musket would be a perfect candidate for Elyse Luray to do some more research on! This Very Good condition US M-1816 musket has the name of the soldier who carried it carved lightly onto the reverse side of the butt. In two lines it reads simply:
L Sites
Zanesville OHIO

Most of the time a first initial and a last name would not necessarily really be enough information to firmly identify a Civil War soldier. However, the addition of the town name lead me to believe that it would be a lot easier to identify our guy, and what I came up with really surprised me. A search of both the civilwardata.com database and the National Park Systems Soldiers & Sailors database revealed that there were a very limited number of L Sites listed for the Union Army. In fact, they were all the same person! My research first turned up a Lycurgus Sites who served the 3rd OHIO Volunteer Infantry. The 3rd OH was a 90 day regiment that served from April to August of 1861. Lycurgus was in Company E, which was from Zanesville, OH “ clearly this must be the guy. I was a little disappointed that he was just a 90-day man, but it was cool that I had a direct hit. I then looked up our next possibility. That name was Lewis Sites, who served in Company A of the 12th US Infantry, Regular Army. I assume originally that this was not our man, but when I doubled checked some information about the 12th, and a complete roster I found that the man was actually Lewis Lycurgus Sites and he was only listed as a recruit, not even as a private. The 12th US Infantry was formed during the summer of 1861, and it is quite possible that when young Lycrugus was discharged from the 3rd OH that he joined the 12th US to collect a bounty for signing up. The 12th US Infantry spent the spring of 1862 in the Washington, DC area serving in the reserve brigade of Sykes’ Regular Infantry, Army of the Potomac. In May of 1862, the 12th US Infantry was transferred to the 5th Corps, Army of the Potomac and proceeded to find itself in just about every major Eastern Theater engagement from the Seven Days to Second Bull Run, to Gettysburg, through the entire campaign that included the The Wilderness, Spotsylvania, Cold Harbor, to Petersburg. They ended the war in serving as guards at the infamous Elmira Prison in New York. However, the story of our young hero does not stop with the 12th! At some point, probably during the summer of 1862 after collecting his bounty for joining, Lewis Lycurgus Sites mustered into the 97th OHIO Volunteer Infantry, and appeared on their rolls as Lycurgus L Sites. The 97th OH was formed in September of 1862 in Zanesville, OH and served in every major battle in the Western Theater from Perryville to Nashville. The 97th OH was present at Stones River, Chickamauga, Chattanooga / Lookout Mountain, the entire Atlanta Campaign including Kennesaw, and the entire Nashville Campaign, including Columbia, Franklin and Nashville. The 97th OH mustered out of service in Nashville, TN in June of 1865, having suffered a total of 1 officer and 92 enlisted men killed or mortally wounded in action and another 1 officer and 160 enlisted men listed as having died due to disease. The time line for the regiments and their times in service line up perfectly, and clearly Lewis Lycurgus Sites served in the 3rd OH for 90 days, joined the 12th US for the bounty (never even achieving the rank of private), and then went home and joined the 97th OH, and probably picked up another bounty for doing so. Further research located Lewis Lycurgus Sites as having been born in 1839 in Ohio. This dovetails perfectly with the information that he was 22 years old when he was mustered into the 3rd OH. At some point in his military career, he was issued a US M-1816 musket that was arsenal converted to percussion and then rifled. It is this gun that is offered here.

The gun is 100% complete and original and though it clearly shows signs of use, it was not abused in any way. The gun is an early Type II in collectors terminology, or more accurately a US M-1822 Musket. The gun was converted from flintlock to percussion with the standard US Belgian conversion system, and was also rifled with three broad grooves. The lock is clearly marked behind the hammer in three vertical lines SPRING / FIELD / 1822, and the faint remains of the matching 1822 date are visible on the barrel tang as well. The lock is marked with the typical US Eagle / US forward of the hammer. The barrel shows the typical Springfield Armory P / Eagle Head / V marks and the stock flat shows the shadow of the original inspectors cartouche, as well as a fairly strong inspection cartouche that rated the gun as 3rd Class in terms of quality and when to have it converted to percussion. The guns action functions perfectly on all positions and is still rather crisp. The gun retains both original sling swivels as well as the correct arsenal modified ramrod that added a concave end to the button end for use with the elongated ball ammunition that was issued to troops with rifled muskets. All of the metal surfaces have been lightly cleaned, but have left most of the markings quite sharp. The gun has a medium pewter tone to it, with some light scattered areas of age discoloration. The metal is mostly smooth with one some light scattered peppering and some minor pitting around the bolster area. The stock is in very good condition with no breaks or repairs. There is a very small chip missing behind the barrel tang, due to the improper removal of the barrel at some point in time. The chip is small and very old, as it has worn quite smooth. The stock shows numerous bumps, dings and bruises from service. There is also a area of rather strange wear on the bottom edge of the buttstock that has left the wood with a slightly wavy feel to it “ I did my best to picture it in the images below. The most important feature of the stock is the lightly carved identification on the left side of the buttstock, that in two lines forever connects the gun to the man who carried it: L Sites / Zanesville OHIO. The carving is quite light and is best viewed at just the right angle in natural light. I did my best to make the pictures of his carving clear.

What can you say about this gun” It is a very attractive, complete and original US M-1816 arsenal conversion that has been rifled. It is in Very Good condition and display wonderfully. The best part of it all is that we know it was carried by a soldier who served in at least three different US infantry regiments during the course of the war and spent the majority of that time in a regiment that saw the elephant at every major Western Theater battle. From Perryville to Nashville this regiment saw more carnage than most. This is a wonderful piece of Western Theater Civil War history, with a solid identification and a fantastic story behind it. The new owner should take the time to request Lewis Lycurgus Sites records from the National Archives. The process takes about 3 months, and since he served in three different units, it will involve three different requests. I have a feeling it will be more than worth it and it will only enhance the value of this fine identified Civil War weapon. The new owner will get copies of all of the research I have been able to do on Lycurgus at this point. This would be a great centerpiece to any Western Theater Civil War collection, especially one that centers on the Buckeye State!